Estádio D. Afonso Henriques is a 30,165 capacity purpose built football stadium located in the north Portuguese city of Guimarães. Home to local football team Vitória S.C , Henriques first opened in 1965 and was last renovated in 2003 in preparation for the UEFA Euro 2004 tournament which was hosted in Portugal.

Estádio D. Afonso Henriques dates back as early as 1965 when it was first built, with the stadium undergoing substantial renovations and expansions in anticipation of the Portuguese hosted Euro 2004 tournament. Designed by architect Eduardo Guimarães who was also involved in designing some of the Brazilian stadiums for the 2014 World Cup, the ground was previously known as Estádio Municipal de Guimarães before being renamed in honour of Portugal’s first King.

After the renovation was complete with the stadium receiving a face-lift and expansion, Vitória Sport Clube hosted FC Kaiserslautern for the inaugural friendly match, with the home side christening the newly refurbished stadium with a 4-1 win. Test-driving the stadium throughout the 2003-2004 season, D. Afonso Henriques Stadium was more than ready for the tournament by the time Summer came around.

Hosting two Group C games throughout the tournament, both of which involved Italy, the stadium proved to be popular with fans, with both matches virtually sold out on the day of the matches.

The first game hosted involved Italy and Denmark which ended in a disappointing 0-0 draw, with the second match seeing Italy beat Bulgaria 2-1  courtesy of a 94th injury time winner by Antonio Cassano – although it wasn’t enough to allow the Italians to qualify.

With the international precedent now set, Vitória de Guimarãe’s home ground has since gone on to host matches of the Portuguese National team including a 2010 World cup qualification match against Malta, and more recently against Cyprus during a Euro 2012 qualification match. Both games saw the home side score 4 goals so for fans in attendances, the matches were certainly enjoyable.

Below is a seating plan of Vitória de Guimarães's Estádio D. Afonso Henriques: 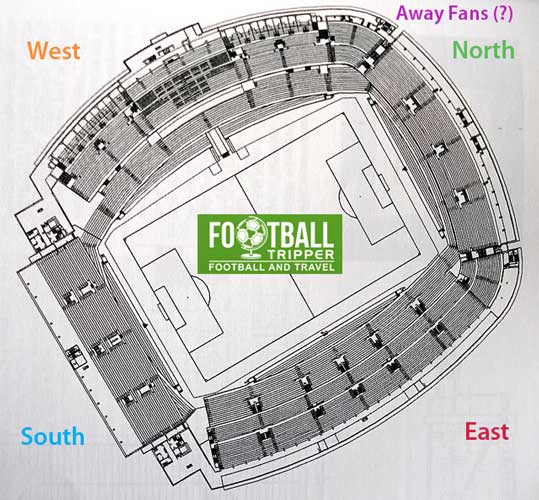 Away fans appear to be housed within the upper section of the north-west corner which is separated from the home supporters by perimeter fencing either side.

There is a fan shop at the stadium however we couldn’t find any information regarding its opening hours. We know that a visit to the club shop is part of the stadium tour so it’s fairly safe to assume that it is at least open on these days.

The guided tours which also include entrance to the museum and trophy rooms generally run four times a week on Tuesday and Wednesdays at 10.00 am, and on Thursday and Saturdays at 3.00 pm.

For further information and to book your place on the tour please visit this page (Portuguese, so use translate) or simply send an email to [email protected]

As there doesn’t appear to be any online ticket sales  for Vitoria SC from both the official website and third party vendors, you will have to acquire tickets either before kick-off or in the days leading up to the match.

Whilst Vitória have decent attendances the stadium is rarely sold out so you shouldn’t have too much of a problem as long as you remember to bring your passport.

How to get to Estádio D. Afonso Henriques

Where is Estádio D. Afonso Henriques?

Vitoria SC’s home ground is located less than 1.2 km west of Guimaraes’ historical city centre which means it is highly accessible on matchdays.

Although Vitoria SC’s website doesn’t elaborate on matchday parking arrangements it does state that there is a car park at the stadium which has room for 650 vehicles with 500 of these undercover.

Guimarães Railway Station sits 1 mile or south south of the city centre and around 2 miles from Vitoria’s stadium in total.

If you’ve read the aforementioned train section you should be unsurprised to find that the closest major airport is located within Porto. Known fully as Francisco de Sá Carneiro, the international airport is some 51 km southwest of Guimaraes.

The two closest hotels to Estadio Afonso Henriques are either the Hotel São Mamede on Rua de São Gonçal which directly leads to the stadium, or Hotel Ibis five minutes south-west of the ground.

If you’re looking for something close to the railway station then check out Hotel de Guimarães and or Hotel Fundador which are located a stones throw away.

What is the capacity of Estádio D. Afonso Henriques?

As of 2022 Estádio D. Afonso Henriques has an official seating capacity of 30,165 for Football matches.

Covid Restrictions may be in place when you visit Estádio D. Afonso Henriques in 2022. Please visit the official website of Vitória de Guimarães for full information on changes due to the Coronavirus.