Estadio do Algarve is a Portuguese stadium which was constructed for Euro 2004. Situated within the city of Faro it is currently used by Gibraltar for Euro 2016 qualification matches having been left vacant since 2013 when the two resident sides Farense and Louletano moved to smaller premises.

Estádio Algarve was one of seven new stadiums built to host matches of Euro 2004. The inaugural fixture, a friendly match, was played on 23rd November 2003 between two local sides SC Farense and Louletano DC who were both expected to become permanent tenants.

Constructed with a capacity of 30,000 – the minimum size required by UEFA for the tournament, the two local sides were unable to fill the ground on a regular basis and subsequently they both moved to smaller facilities in 2013.

In the Summer of 2008 the stadium hosted the a pre-season tournament known as the Algarve Challenge Cup. It featured three British sides: Cardiff City, Celtic, Middlesbrough and Vitória S.C from Portugal.  It has also occasionally hosted friendly matches of the Portuguese National team at the rate of around one every two years or so.

Remaining vacant, the Gibraltan Football Association announced that they would be using the venue as their home for the qualification matches of Euro 2016. Expected to cost the Gibraltar €25,000 per match, the move will act as a short term solution as the new Europa Point Stadium is being built to replace Victoria Stadium which fails to satisfy UEFA’s stadium requirements.

Below is a seating plan of Gibraltar National's Estádio Algarve: 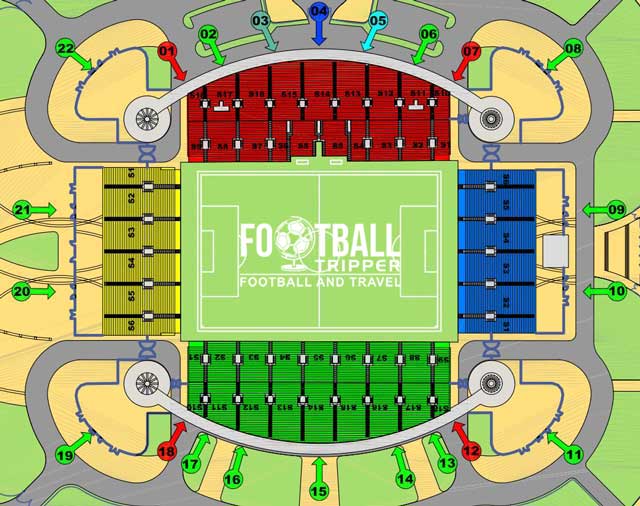 Away fans are allocated the eastern stand (Green), although there is also mixed zone with the south-west half of the main stand (red). The two goal-end stands are closed for each match, as are the upper-tiers of both side stands.

As for ticket allocations there doesn’t appear to be a set number or upper limit. Of the three Euro 2016 qualification matches which have been played so far the attendance has fluctuated greatly depending on who the opposition is.

For the first match against Poland there was an attendance of 1,620, for the match against Georgia it was just 600, and when the 2014 World Cup Champions Germany visited a record attendance of 7,467 was recorded. It would certainly be impressive if the Republic of Ireland or Scotland could exceed that number.

At the stadium there are over twenty various food and beverage sale points across the four stands, as well as a restaurant within the west stand with panoramic views.

As there are no permanent clubs at Algarve Stadium there are no club shops. You should still encounter programme sellers around the ground though, and unofficial merchandise if the game is big enough.

It doesn’t appear as if the local council of Faro currently offers stadium ours of the iconic Euro 2004 venue. If this ever changes we’ll be sure to update this section.

How to buy Gibraltar National Tickets

To purchase international tickets you must go through your country’s football association/federation. As there is no permanent team here there’s no ticket office or online sales points for events at Estadio do Algarve. Tickets are always sold through the promoter.

How to get to Estádio Algarve

Where is Estádio Algarve?

Estadio do Algarve sits within the Parque das Cidades sports complex approximately 10km north-west of Faro city centre. As it’s much too far to walk, the easiest way of travelling to the ground is via the train.

There are 3,500 parking spaces available at Estadio do Algarve with the sports complex, Parque das Cidades containing four car parks in total.

The stadium is served by its own station which is named after the sporting complex “Parque das Cidades”. The journey takes around 6 minutes from Faro Railway Station, and then a further 15 minutes or so by foot. There are typically a dozen or so train services each day which go past the stadium.

Faro International Airport is located around 4km west of Faro city centre although by road this is is around 6.4km. Many budget airlines operate out of the airport which means fairly cheap flights across Europe.

Upon landing you can hire a rental car, hail a taxi or catch a shuttle service to the city centre.

As a popular tourist destination there are plenty of hotels within Faro, however there are almost none within close proximity to Estadio Algarve. Within 10 minutes of the city centre and train station there is a Best Western, Hotel Afonso and Hotel Ibis to name but three examples.

Who plays at Estádio Algarve?

What is the capacity of Estádio Algarve?

As of 2023 Estádio Algarve has an official seating capacity of 30,002 for Football matches.

When was Estádio Algarve opened?

Covid Restrictions may be in place when you visit Estádio Algarve in 2023. Please visit the official website of Gibraltar National for full information on changes due to the Coronavirus.