Estádio Cidade de Coimbra or Estádio do Calhabé in Portuguese is a council owned sports stadium located in the historic capital of Portugal, Coimbra. Used the majority of time by local football team Associação Académica de Coimbra, the 30,210 capacity ground first opened in 2003.

Estádio Cidade de Coimbra was formerly known as both Estádio Municipal de Coimbra or Estádio do Calhabé before being modernised in order to host matches of the Portuguese hosted 2004 Euro Championship. Located within a wider sports complex known as Euro Stadium Project, the ground is owned by the Municipality of Coimbra and leased to the football team on an fixed long term lease.

Designed by the Plarq archtiecthrual firm from Portugal working in conjunction with the KSS Design Group who helped remodel Stamford Bridge and the London Olympic Stadium, the renovation resulted in a contemporary looking stadium. With shiny glass façades and a unique curved roof which takes advantage of the warm climate,  the only negative for football fans on the side is the preservation of the Athletics track.

Reopening on the 12th September 2003 in time for the incoming season, Académica de Coimbra welcomed domestic giants, S.L. Benfica for the first competitive game at the refurbished stadium. The brand new second tier was put to good use, with the 30,210 capacity stadium all but sold out for the inaugural match with the ground firmly test-driven throughout the season  in time for the Euro’s set to take place in the Summer.

During the tournament, Estádio Cidade de Coimbra hosted two Group B matches, both of which set at the time, new records for youngest goalscorers in the European Championships and involving Switzerland.

The first match against England, saw the Wayne Rooney score to secure a 3-0 victory, with Switzerland losing 3-1 to France with Johan Vonlanthen scoring their only goal, and subsequently beating Rooney’s record.

Below is a seating plan of Académica's Estádio Cidade de Coimbra: 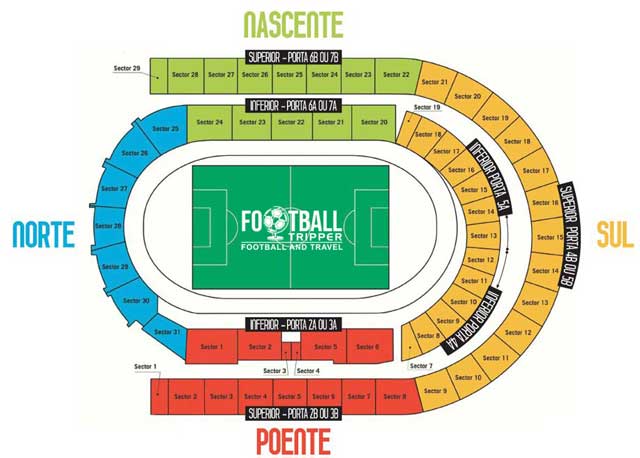 If anyone knows and can confirm exactly where the away fans sit inside the stadium then please let us know either through the contact page or twitter.

Académica de Coimbra’s fan shop/sport zone can be found in the eastern stand and as there doesn’t appear to be an online store, it’s easily the best place to purchase official merchandise of the club.

How to buy Académica Tickets

Like the majority of Portuguese Football teams with the exception of the big three teams, tickets to see Académica de Coimbra play can only be purchased in person and not online as one might expect in the 21st century.

Prices are more than reasonable with a seat behind the goal likely to set you back € 15.00 or so, with something central within the main stand priced at around € 30.00.

Tickets are sold during the week from the club shop, and from the various ticket box offices on matchdays.

How to get to Estádio Cidade de Coimbra

Where is Estádio Cidade de Coimbra?

Estádio Cidade de Coimbra is located approximately 3.0 km from the city’s historical centre which is usually defined as the eastern banks of the Mondengo River close to where Coimbra railway station is.

Once you get to the stadium you will either have to contend with on-street parking or the car-parks attached to the various shopping centres such as Dole Vita which is practically adjoined to the stadium’s north stand.

There doesn’t appear to be an official on-site car park of Coimbra’s Municipal Stadium.

The closest train station to Academica’s ground is São José which can be found a few hundred metres south along Rua Tomé Rodrigues Sobral.

There are no places to stay around the ground which means you will have to look for accommodation options back within city centre. Along Rua do Brasil on the eastern bank of the Rio Mondego there are numerous well priced options including a Hotel Ibis, Hotel Astoria and Hotel Bragança.

What is the capacity of Estádio Cidade de Coimbra?

As of 2022 Estádio Cidade de Coimbra has an official seating capacity of 30,210 for Football matches.

Covid Restrictions may be in place when you visit Estádio Cidade de Coimbra in 2022. Please visit the official website of Académica for full information on changes due to the Coronavirus.