Estádio do Dragão translated in English as Stadium of the Dragon, is the purpose built football stadium belonging to Portuguese powerhouse F.C Porto. Inaugurated in 2003 with a friendly match against FC Barcelona, the 50,431 capacity ground hosted the opening ceremony of UEFA Euro 2004 as well as five matches at various stages of the tournament.

Estádio do Dragão is the name of FC Porto’s home ground which was built to host matches of the Euro 2004 tournament, replacing the club’s former 1952 built home, Estádio das Antas. Known as the Stadium of the Dragon in English after the club’s nickname of Dragões which stems from the mythical creature appearing on the club’s badge, the inaugural match was held against Barcelona on the 16th November 2003.

This fixture attracted a record  crowd of 52,000 although the official capacity currently sits at 50,431. During the Portuguese hosted Euros, Estádio do Dragão hosted five matches including the curtain raising match between hosts and eventual winners Greece. Portugal lost the opening fixture 2-1 but had the chance to avenge the defeat against  the Greek underdogs in the final but lost 1 nil at Estadio Da Luz.

Designed by Portuguese architect Manuel Salgado, Estádio do Dragão cost a reported €98 million euros with the government subsiding around 1/5th of this with a contribution of €18.5 million. With the club opting to sell the naming rights of the stands to help cover the costs of construction, many believe Porto would sell the naming rights to the stadium but as of today this is yet to transpire in a move which has pleased ultra fan groups.

After the first friendly match was saw 16 year old wonderkid Lionel Messi’s European début, the club were forced to temporarily relocate back to their old home, Estádio do Futebol Clube do Porto, as the new stadium suffered severe pitch problems with the turf replanted and nurtured back to health by February 2004.

View of Estadio do Dragao

Below is a seating plan of Porto's Estadio do Dragao: 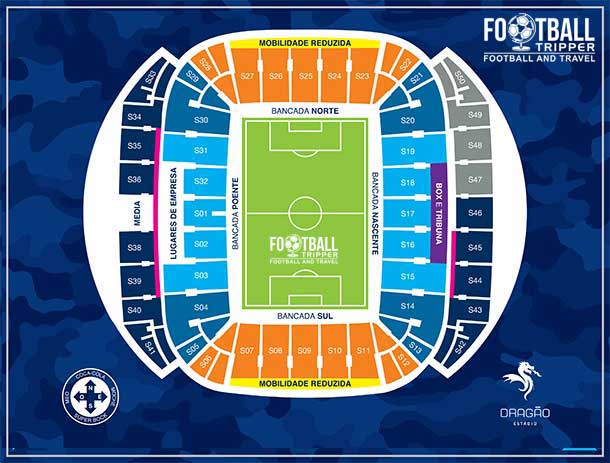 Estádio do Dragão is comprised of four stands: North, East, South and West.

Estadio do Dragao Away Section

For domestic matches away fans are usually housed block 21 within the north-east corner of the ground within “Bancada Norte”. A relatively small section of seating this probably changes for big European matches.

The majority of drinking establishments are to be found back within the city centre rather than at the stadium.

Across the road on the northern side of the ground there is a shopping centre known as Dolce Vita.

FC Porto operate several shops throughout the city in addition to their very own online Loja (Shop). The main club store which is most widely visited by fans is at The Dragao stadium, located next to the museum.

Fully guided tours of the facilities at Estádio do Dragão last around 45 minutes and are usually conducted every 30 minutes until 4.00 pm. Starting inside the Porto Museum, the stadium tour has become one of the most popular tourist attractions in the city since opening.

Please note that you don’t have to visit both, and can book separately, however most tourists end up combining both for the full Porto experience.

How to buy Porto Tickets

Tickets to see Porto play at home can either be purchased online or from the ticket office at the stadium in the days leading up to the match.

Please note that the above prices are based on a match against Gil Vicente FC who are one of the smaller teams in the league and thus tickets for other matches may well be slightly more expensive (€5.00- €20.00) for other home games.

How to get to Estadio do Dragao

Where is Estadio do Dragao?

Estadio do Dragao is located approximately 4.5km from Praça Mouzinho de Albuquerque which is said to be Porto’s city centre.

There are a few private car parks within a 5-10 minute radius of the ground, however they usually fill up fast so make sure that you get there early.

Porto is served by two railway stations known as Estação de São Bento in the city centre, and Porto-Campanhã station which sits east of the city. Both serve a mixture of commuter routes, direct services to Spanish cities such as Madrid.

Public Transport of Estadio do Dragao

The stadium has its very own metro station known as Estadio do Dragao, and is is the last stop on lines A (Blue), B (Red) and E (Purple). It is also reachable from the orange line F which makes it highly accessible from almost anywhere in the city.

The closest airport Francisco Sa Carneiro is 15km north-west from the city centre. Sometimes referred to as just Aeroporto do Porto once you have landed you can catch Metro Line E to the city centre, and even the stadium itself for a few euros.

Hotels Near Estadio do Dragao

The closest hotel appears to be AC Hotel Porto which is 2 minutes north of the stadium next to the Dolce Vita shopping centre.

Who plays at Estadio do Dragao?

Portuguese side Porto play their home matches at Estadio do Dragao.

What is the capacity of Estadio do Dragao?

As of 2022 Estadio do Dragao has an official seating capacity of 50,035 for Football matches.

When was Estadio do Dragao opened?

What is the postcode for Estadio do Dragao?

Covid Restrictions may be in place when you visit Estadio do Dragao in 2022. Please visit the official website of Porto for full information on changes due to the Coronavirus.