Estádio Cidade de Barcelos is a multi-purpose stadium located in the Barcelos Municipality of the greater Braga District. Completed in 2004, the 12,504 capacity ground is primarily used for the football matches of local Primeira Liga team Gil Vicente F.C.

Estádio Cidade de Barcelos first opened on the 30th May 2004 with an inaugural match held between the home side, Gil Vicente and Nacional de Montevideo with the Uruguayan visitors narrowly defeating their hosts, 2-1 in a well attended match. Technically opened in time for Euro 2004, Barcelos was not part of Portugal’s bid and did not feature in the tournament with the capacity not large enough even if organisers wanted to involve the local area.

The new stadium replaced Gil Vicente’s former home of Estádio Adelino Ribeiro Novo which the club had previously played at for over 70 years, having first moved into the facilities in 1933. Sadly, the stadium began to age with facilities becoming slowly out of date resulting in higher maintenance costs which the owners, the local municipality of Barcelos, looked to avert in the long run with the construction of a new 12,504 capacity stadium.

The former stadium is still used by both the reserve and youth teams so some of the club’s history is retained although fans are sympathetic to the necessities of modernisation in the modern game of football. During the 2005-2006 campaign the club lost the right to compete in the Primeira Liga and Cup of Portugal the season after fielding an illegible player, which certainly offset a lot of positivity around the club after the successful stadium relocation.

Designated by UEFA as a Category C ground which means the stadium can host both European and International fixtures, Estádio Cidade de Barcelos, hosted two games of the 2006 Under 21s Euro Championships both involving Serbia against Germany and Portugal. Sadly, the club are yet to host a European fixture at the new stadium to date with the 2000/2001 season the last time the team could have been involved in the UEFA Cup.

Below is a seating plan of Gil Vicente's Estádio Cidade de Barcelos: 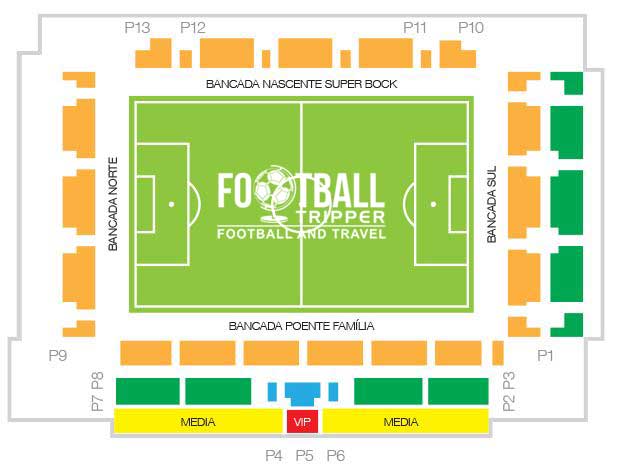 How to get to Estádio Cidade de Barcelos

Where is Estádio Cidade de Barcelos?

What is the capacity of Estádio Cidade de Barcelos?

As of 2023 Estádio Cidade de Barcelos has an official seating capacity of 12,504 for Football matches.

Covid Restrictions may be in place when you visit Estádio Cidade de Barcelos in 2023. Please visit the official website of Gil Vicente for full information on changes due to the Coronavirus.