Officially the Estádio do Sport Lisboa e Benfica or Estádio da Luz as it is commonly known, is a multi-purpose stadium located in the Portuguese capital city of Lisbon.

Constructed in preparation for the UEFA Euro 2004 tournament, Benfica’s stadium held its inaugural match against Uruguayan side Club Nacional de Football on the 25th October 2003. The opening fixture which Benfica won 2-1 saw the stadium set a record attendance of  65,400 with the club proceeding to use the ground for the remainder of their season. The Estádio da Luz proceeded to host a memorable season with Benfica earning home victories against traditional rivals FC Porto and Sporting.

With the precedent of exciting football set, Estádio da Luz was ready to host International Football with Benfica’s new home set to host five matches in total including three group matches. The quarter final proved to be one of the more memorable games of the tournament with Portugal taking on England in a match which saw the home side win on penalties after extra time. The final proved to be slightly anti-climatic with Greece defeating hosts Portugal 1 nil, but the stadium was deemed a success by UEFA.

Designed by architect Damon Lavelle to let as much light in as possible, Estádio da Luz, The Stadium of Light (A name shared with Sunderland’s ground), certainly lives up to its name with the polycarbonate roof allowing natural sunbeams onto the pitch with the roof appearing to levitate above the  stands due to special tie-beams which eliminates the need for intrusive supports which allows even more light into the ground.

With the warm Portuguese climate, Benfica’s stadium is very popular with fans with some even beginning to call it “A Catedral”, The Cathedral. The name proved to be appropriate when it became a Mecca for European Football when The Stadium of Light hosted the 2013/2014 Champions League final between Galácticos and Atletico Madrid in a fiercely contested Madrid derby.

Below is a seating plan of Benfica's Estádio da Luz: 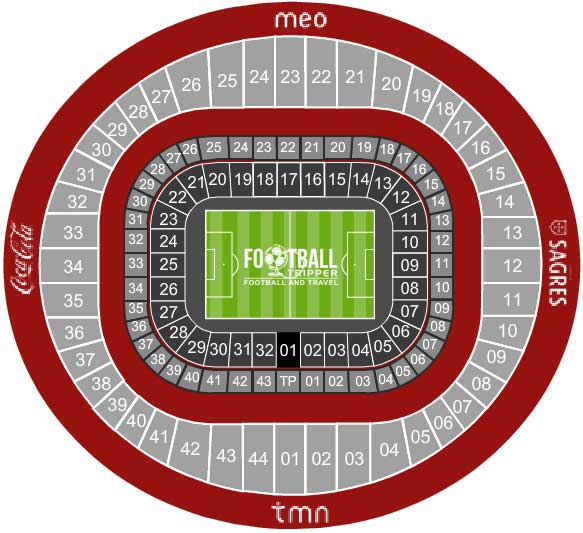 The standard away allocation for European matches appears to be appear 3,000 tickets, however for Newcastle United’s trip back in 2013 for the Europa League this was apparently increased to 4,000. Of course these fixtures are generally in less demand amongst home supporters, particularly if the league cup is being prioritised.

Travelling fans are usually housed within the third-tier of the north-east corner in what many refer to as the coca-cola stand. The standard allocation puts away fans within sections 31, 32 and 33. As the stadium’s capacity is a smallish-large at 65,000, views are generally pretty decent from the away section.

With excellent transport links and a lack of bars immediately around Estadio da Luz you’re much better of drinking in the city centre both before and after the match.

Benfica operate a club shop at the stadium known as the Benfica Megastore in addition to an official online store. Located in the north-eastern side of the ground, it is usually open seven days a week from 10.00 am to 11.00 pm, and it acts as the gift shop and final point of the stadium tour.

Tours of the world class facilities at Estadio da Luz can either be booked independently or as part of a museum package. Lasting around 60 minutes there are usually around 15 tours a day which depart every half an hour or so from 10.00 am onwards until 7.00 pm however the Museum closes at 6.00 pm.

How to buy Benfica Tickets

Tickets to see Benfica in action at their stadium of light can be purchased via the usual channels including Online and at the ticket office at the stadium. Prices are generally divided into two sections of seating based on whether you are behind the goal or sat along the sides.

Please note that the above prices are based on a match against F.C Penafiel and may not be representative of all league matches, particularly derby matches.

How to get to Estádio da Luz

Where is Estádio da Luz?

There is a small amount of official parking available at the stadium however we’re unsure as to the exact arrangements on matchdays.

Rossio Railway Station or Estação Central as it was previously known as is the main train station of Lisbon. Located on Rossio Square it is well connected to the rest of the country and it is 6.4 km south-east of Benfica’s stadium.

The closest metro station to the stadium is technically Alto dos Moinhos however Colegio Militar/Luz (The official metro stop) is a a much safer and easier walk to the stadium.

Both stops are situated on the Azul Line and are around 7-8 stops from the city centre depending on where you get on from.

Lisbon is served by Aeroporto da Portela which is the largest airport in Portugal. Often known as Lisbon Portela Airport, it is located approximately 6km north-east of Estadio da Luz.

Whilst there aren’t many hotels within close proximity of the stadium the centre of Lisbon is jam-packed with accommodation options to suit all budgets. Any hotels located within distance of stops on the Azul line such as Marquês de Pombal will make it exceptional easy to get to the stadium.

Who plays at Estádio da Luz?

What is the capacity of Estádio da Luz?

As of 2023 Estádio da Luz has an official seating capacity of 65,647 for Football matches.

When was Estádio da Luz opened?

What is the postcode for Estádio da Luz?

Covid Restrictions may be in place when you visit Estádio da Luz in 2023. Please visit the official website of Benfica for full information on changes due to the Coronavirus.