Estádio Municipal de Braga is a football stadium located in the middle-ages capital of Portugal, Braga. Constructed in 2003 in anticipation of the Portuguese hosted UEFA Euro 2004 competition, the 30,286 capacity ground is now home to top-flight side Sporting Clube de Braga.

Estádio Municipal de Braga was constructed in 2003 in preparation for the Euro 2004 tournament which Portugal successfully hosted the following summer. Replacing S.C Braga’s former home, the 1950’s built Estádio 1st de Maio (1st of May Stadium), Estádio Municipal has one several awards for its design including the 2011 Pritzker Prize for the architect Eduardo Souto de Moura.

Constructed within the heart of a beautiful valley, the stadium is known as A Pedreira (The Quarry) and cost a reported €83.1 million with much of the cost attributed to expensive rock moving process.  Overall it was the fourth most expensive stadium to be built for the Euro 2004 with the stadiums belonging to the big three teams costing more: Estádio da Luz (Benfica) and Estádio José Alvalade (Sporting), and Estádio do Dragão (Porto).

The inaugural match was held on the 30th December 2003 against Spanish side Celta de Vigo with the friendly match seeing the home side win 1 nil in-front of a practically sold out crowd. After test driving stadium for the second half of the season, Municipal de Braga was ready to welcome International teams, and during the Euros, the new stadium successfully hosted  Bulgaria V Denmark and Netherlands Vs Latvia.

In July 2007, Sporting Clube de Braga announced that they had signed a three year sponsorship deal with French insurance providers AXA with the name of the stadium set to be changed to Estádio AXA (AXA Stadium). This led to some confusion when the owners of the stadium, the local council, stated that it had not been officially renamed as the deal had involved the club and the tenants only.

Nevertheless, since the deal has expired, the club once again now refer to the ground as simply Estádio Municipal de Braga.

Below is a seating plan of Braga's Estádio Municipal de Braga: 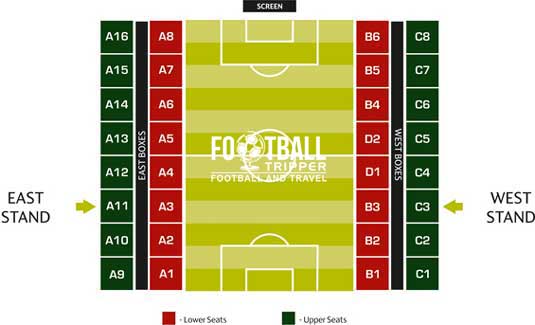 Away fans are usually housed within the south-east corner of the stadium next to the cliff, and depending on the levels of demand the travelling fans can be stretch across two tiers: blocks A7 and A8 in the lower , and A15 and A16 in the upper.

When you get to the stadium there is a Estádio Bar which has a splendid terrace which naturally takes advantage of the Portuguese climate, otherwise you’re looking at drinking back towards the centre of Braga.

SC Braga operate three shops in total: one at the Bragaa Parque Shopping Center, one at the Bingo Galleries Store in the centre of town, and one online which is known as the Braga Loja.

Self-described as “one of the most beautiful stadiums in the world” you can be sure as hell that SC Braga offer stadium tours of their unique stadium. Costing just 6.00 for adults, 4.00 for students and 2.00 for children, the full-guided tour is certainly a bargain.

How to buy Braga Tickets

Tickets to see SC Braga can be purchased online from the official website, however they must be collected in person at the box office where you can also buy them in the weeks leading up to the match.

Prices for Primeira matches are surprisingly cheap with bargain €10.00 – €15.00 euro tickets not uncommon for the lower profile opposition. Expect to pay more however for when the big boys come to town with costs between €50.00 – €75.00 not uncommon for Champions League games.

How to get to Estádio Municipal de Braga

Where is Estádio Municipal de Braga?

Estádio Municipal de Braga sits 2.3km from the Cividade district which is essentially the city centre. The walk by foot is very pleasant and is likely to take the average person no more than 30 minutes.

There s very limited parking at the stadium and its immediate environs which are mainly comprised of residential areas. Thankfully the city of Braga isn’t too large and you should be able to park up within a 10-15 minute walk if you get there early and keep your eyes peeled.

The train station is centrally located around 2km from Estádio Braga and as mentioned in the previous section it is eminently walkable. The train station has good connections to the rest of Portugal, most notable to Porto which will take you around 1 hour 18 minutes.

The closest airport to Braga is Francisco de Sá Carneiro which is often referred to as Porto International (OPO). Whilst the distance 50km distance isn’t ideal, it is tempered slightly by the decent range of low-cost airlines who use the airport as a hub.

Upon landing you could feasible get a rental car if you have the budget and drive to Braga in around 35-40 minutes, the shuttle bus in 50 minutes or the train in just under 2 hours.

There are numerous affordable accommodation options when it comes to the city with names such as Hotel dos Terceiros, Albergaria da Se, and the familiar Hotel Ibis Braga Centro. Next to Braga Station there is the “Basic Braga by Axis” which is cheap and cheerful.

What is the capacity of Estádio Municipal de Braga?

As of 2023 Estádio Municipal de Braga has an official seating capacity of 30,286 for Football matches.

What is the postcode for Estádio Municipal de Braga?

Covid Restrictions may be in place when you visit Estádio Municipal de Braga in 2023. Please visit the official website of Braga for full information on changes due to the Coronavirus.