Estádio Nacional or Estádio do Jamor as it is often referred to as is the former home of the Portuguese National Football Team. Succeeded by more modern stadiums which share hosting duties, Estádio Nacional is now primarily used to host the annual the Cup Final in Portugal.

Constructed over a five year period beginning in 1939, the inauguration ceremony was held on 10th June 1944 to coincide with Portugal Day which is one of the country’s nationally observed holidays.

Designed by Francisco Caldiera Cabral and Konrad Weisner,  Estádio Nacional is notable for its oval design which is interrupted on the east side to provide an entrance.

Situated within the Jamor sports complex which the stadium inherits one of its most popular names from, Estadio Nacional, has hosted the Portuguese Cup Final on all but five occasions since 1946.

Succeeded by a host of modern stadiums which were constructed for Euro 2004, Estadio do Jamor is somewhat of a relic and wasn’t even included in the ten chosen venues for the tournament. The final was held at Benfica’s rebuilt Estádio da Luz.

The most famous match to be held at Estádio Nacional was without a doubt the 1967 European Cup Final between Celtic and Internazionale. The courageous side from Scotland defeated their much fancied opponents 2-1 to write history as the first British European Champions, earning the immortal nickname of the Lisbon Lions.

Below is a seating plan of Portugal's Estádio Nacional: 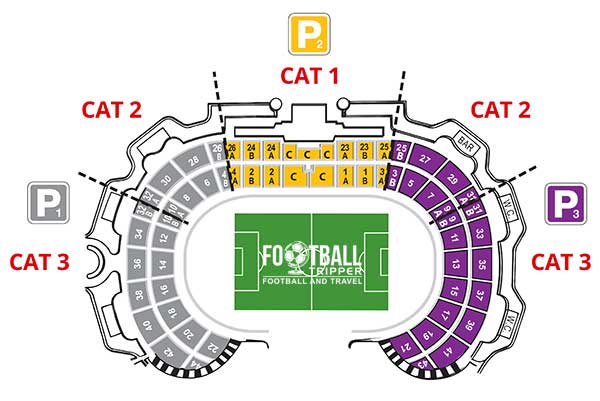 Estadio Nacional is ccomprised of one main horshoe-shaped section of seating, and then a smaller separate stand on the eastern side of the pitch:

As International matches are no longer held at Estádio Nacional there isn’t really an away section. For the cup final the ground is usually split in half between both sets of fans.

There are a real lack of bars around the vicinity of the stadium so you’re best bet is undoubtedly to drink within Lisbon city centre.

Expect to be able to purchase merchandise if you’re attending the cup final however it won’t be from any permanent shop!

It doesn’t appear as if there are any stadium tours currently available of Portugal’s former Nationals stadium which is certainly a shame.

How to buy Portugal Tickets

As there are no regular matches played at Portugal’s national stadium it isn’t as if there’s a dedicated box office. Tickets for cup final matches are sold via the participating teams website and ticket outlets.

How to get to Estádio Nacional

Where is Estádio Nacional?

Estádio Nacional of Portugal is located approximately 12 km west of Lisbon’s city centre within the municipality of Oeiras.

Surrounded by dense forestry there is a distinct lack of parking at the stadium itself with a few hundred parking space max within the wider Jamor sports complex.

The nearest train station Cruz Quebrada sits 2.2 km south-east of the stadium. It is served by infrequent services from Lisbon city centre and offers one of the most scenic journeys in world football!

The nearest hotel is the four star Amazonia Jamor Hotel five minutes north of the stadium. If you happen to have a rental car there are a cluster of more affordable hotels west of the A5 including a Holiday Inn Express and Hotel Ibis.

Back within the centre of Lisbon you are of course blessed with accommodation options.

Who plays at Estádio Nacional?

Portuguese side Portugal play their home matches at Estádio Nacional.

What is the capacity of Estádio Nacional?

As of 2023 Estádio Nacional has an official seating capacity of 37,500 for Football matches.

When was Estádio Nacional opened?

Estádio Nacional officially opened in 1939 and is home to Portugal

What is the postcode for Estádio Nacional?

The postcode for Estádio Nacional is 1495.

Covid Restrictions may be in place when you visit Estádio Nacional in 2023. Please visit the official website of Portugal for full information on changes due to the Coronavirus.