Estádio do Centro Desportivo da Madeira is a multi-purpose sports ground which is home to Portuguese football team Clube de Futebol União. With a capacity of just 2,500 it is the third largest on the Island of Madeira behind CD Nacional and Marítimo stadiums.

Below is a seating plan of CF Uniao's Estádio do Centro Desportivo da Madeira: 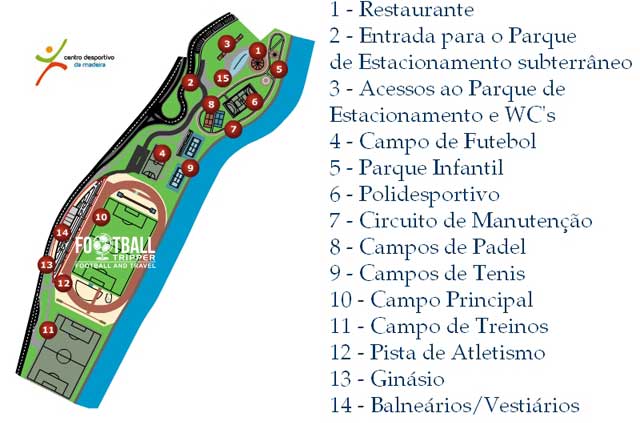 If anyone out there knows where the away fans are located within the ground then please feel free to let us know!

There’s no official information regarding a C.F. União club shop at the stadium and there doesn’t appear to be an online store either.

Tours of Madeira’s Sports Centre and Stadium have never really been on the cards, and it is unlikely that a guided tour ever will be.

Tickets to see C.F. União are usually only available to purchase from the stadium before kick-off, and are likely to cost around €15.00 on average.

If you happen to be attending one of the more popular matches then remember to double check the official website for further ticketing information.

Centro Desportivo da Madeira is located between the village of Ribeira Bravaand the small parish of Water Serra some 21 km west of Funchal which is the island’s capital.

Limited parking is available within the sports complex on matchdays.

There isn’t really any rail infrastructure within the island of Madeira, and no train station in Funchal. Getting a taxi or hiring a rental car may be cost-effective depending on how long you plan on visiting the local area for.

The island is served by Madeira International Airport which is sometimes referred to by the locals as Funchal Airport. Although there are some direct flights from Europe, most flights require you to transfer in either Porto or Lisbon.

The three closest hotels to União da Madeira’s ground are the four star Enotel Baia, the Cheerfulway Bravamar Hotel which overlooks the sea, and the Hotel do Campo which is slightly further inland.