Estadio Ramón Sánchez-Pizjuán is the home stadium of Sevilla FC boasting a capacity of 45,500 replacing Estadio Nervion in 1958. The ground has hosted some important matches over the years including the 1986 European Cup Final as well as the 1982 World Cup semi-final.

Sevilla’s stadium Ramón Sánchez Pizjuán officially opened on the 7th September 1958 when Los Rojiblancos drew with Real Jaén 3-3 in their first football match at their new home. The construction of the ground was very problematic with plans first conceived in 1937, and the first iteration of Ramón Sánchez Pizjuán was finished without a second tier at both goal ends.

To make matters worse, club president Ramón Sánchez Pizjuán died a few weeks before construction even began meaning that he wasn’t able to witness the enactment of his vision for Sevilla FC, although his successor, Ramón de Carranza, ensured that the stadium would be named in his honour to continue his legacy within football.

As of 2014, Estadio Ramón Sánchez Pizjuán has become a fortress for the Spanish national team, with La Furia Roja currently holding an undefeated record as of 2014 (19 wins, 3 draws).

Besides this amazing fact,  the Pizjuán stadium has hosted a variety of important matches in the world of football starting with the 1982 World Cup and the 1986 European cup final between FC Steaua and Barcelona, with the Romanians beating Sevilla’s Spanish rivals on penalties. Maybe the stadium is haunted, who knows?

The 1990s saw modest redevelopments of Estadio Pizjuán with the stadium being turned into an all seating arena, followed by a period of post-millennium inertia whereby the club had several unsuccessful redevelopment plans due to  one reason or another. Whether or not, Sevilla locate to a new stadium or development remain to be seen. especially Europe is recovering from a global recession of a few years ago.

Below is a seating plan of Sevilla's Estadio Ramón Sánchez-Pizjuán: 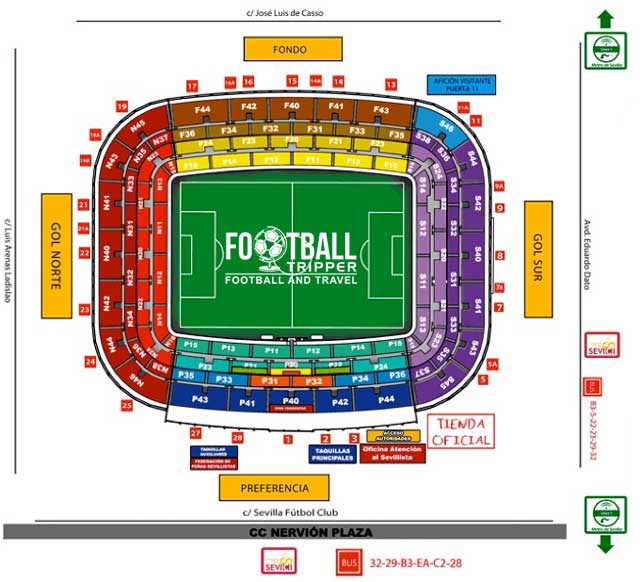 For domestic matches away fans who make the trip to Seville are housed within one small section of the south-east corner which is accessible from gates 11 and 11a.

Situated at the back of the stand, the default allocation of tickets occupies the white coloured chairs at the top with surprisingly decent views of the action on the pitch below.

The map below outlines some of the most popular sports bars and Irish pubs in the city with Seville blessed with a good mix of entertainment and culture not always found in some Spanish cities.

The stadium is based in an average urban area, pretty close to the city centre which means there are a reasonable amount of choices when it comes to eating.

The closest and place with the most options is probably the Nervión Plaza shopping centre which is to the right of the ground, although there is also lots of options around Luis de Morales and Plaza Nueva, particularly for bars.

The cuisine of Seville generally falls under the Andalusian umbrella which means that Tapas is likely to be on the menu.

In total there are three Sevilla club shops which you can visit, plus the club’s official online store. The most popular one is undoubtedly at Estadio Ramon Sanchez Pizjuan which is usually crammed full on matchdays:

How to buy Sevilla Tickets

You can buy tickets to see Sevilla FC through the usual means including online or at the ticket windows either during the week proceeding the match or on the day of the match, if you want to take a risk. Sevilla don’t routinely sell out, but it can be easier to secure tickets well in advance.

Prices like all matches depend on the opponent and perceived levels of demand, but on average expect to pay anywhere between €22.00 – €65.00 for a covered seat within the main stand.

How to get to Estadio Ramón Sánchez-Pizjuán

Where is Estadio Ramón Sánchez-Pizjuán?

Estadio Ramón Sánchez Pizjuán is more less located in the heart of Seville, less than 1.5 miles from both the famous Cathedral and the train station.

Estadio Pizjuán can be reached by Seville’s main ring road towards the east of the city known as the A4. By following signs which point to the city centre, all you have to do is turn onto the Luis de Morales road to reach the stadium with relative ease.

There isn’t room for an official car-park at the stadium which means you will have to find a parking garage or spaces on the surrounding streets. There is parking at the nearby station available however it can be very expensive. My advice would be to check out Parkopedia.

Sevilla-Santa Justa or just Santa Justa is the main railway station in Seville and connects the city to other major places such as Madrid (3 hours), Barcelona (11 hours) and Málaga (overnight).

Located a mere 1km away from the stadium with a recognisable elliptical shaped façade, it will take you no more than 15 minutes to walk it, providing you follow avenue de Kansas City onto Calle Luis de Morales. The ground is behind Corte Inglés.

Seville’s new metro system opened in 2009 and stretches 18km around the city in a reverse U shape going from South-West to South-East between 6.30am-11pm on weekdays and even later until 2am on Fridays and Saturdays.

Costing just €4.50 for unlimited trips (day pass) or €1.30 for a single, to get to the stadium you’ll want travel on line 1 and get off at either Nervión or Gran Plaza metro stations in order to leave yourself with the shortest walk.

Aeropuerto de Sevilla is the main airport for Seville and is known to be a flight hub for low cost airlines throughout Europe.

Located towards the north east of the city, it lies on the outskirts of town approximately 10km away from Ramón Sánchez-Pizjuán. Once you have landed you can get to the city centre through either one of two ways.

Firstly the Bus is frequent cheap and cheerful at a cost of €4,00 for a single trip, and should take you no more than 50 minutes to get to Plaza de Arma. Second option, is a car, so this even either means hiring one yourself or getting a taxi.

The nearest hotel to Estadio Ramón Sánchez Pizjuán is undoubtedly Novotel Sevilla Marques de Nervión and Hesperia Sevilla but due to their close proximity, we’d be surprised if they weren’t booked up months in advance.

As the city has great infrastructure you really shouldn’t limit yourself to hotels just near the stadium, with there being infinite choice surrounding the nucleus of Plaza Ramón Ybarra Llosent.

Examples include Hotel Casa Del Poeta, Hotel Amadeus & La Musica and Hotel Murollo. Don’t take my word for it though and take a look for yourself.

Who plays at Estadio Ramón Sánchez-Pizjuán?

What is the capacity of Estadio Ramón Sánchez-Pizjuán?

As of 2022 Estadio Ramón Sánchez-Pizjuán has an official seating capacity of 45,500 for Football matches.

When was Estadio Ramón Sánchez-Pizjuán opened?

What is the postcode for Estadio Ramón Sánchez-Pizjuán?

The postcode for Estadio Ramón Sánchez-Pizjuán is 41005.

Covid Restrictions may be in place when you visit Estadio Ramón Sánchez-Pizjuán in 2022. Please visit the official website of Sevilla for full information on changes due to the Coronavirus.