The Estadio Benito Villamarin is the home stadium of La Liga side Real Betis, located in Seville, Spain. The ground first opened in 1929, and has undone two major renovations since in 1982, and in 2000, with the capacity now standing at 52,500.

Estadio Benito Villamarín first opened on 17th March 1929 with an inaugural match between Spain and Portugal which saw the hosts humiliate their neighbours with a 5-nil thrashing. Designed by a team of architects, Antonio, González and Cordón who also lent a hand to the 1913 San Mamés, Real Betis became full-time residents on the 16th July 1936 after previously playing matches at both Campo del Patronato and Benito Vllamarín.

Originally known as Estadio de Heliópolis, the new stadium was one of the most modern sports facilities in Spain at the time. The name Estadio Benito Villamarín only came into existence in the 1970s to coincide with a series of redevelopments, however it was later changed to Estadio Manuel Ruiz de Lopera in 2010. Lasting 10 years in total, Real Betis reverted back to the old name in 2010 after membership vote after the president had departed.

Benito Villamarín has undergone several renovations since opening including restoration in 1948 after sustaining flood damage when the river Guadalquivir’s bank’s burst. The most notable reconstruction came in the years leading up to the 1982 World Cup, which saw Betis’ stadium transform into a large outdoor arena capable of seating 47,500 supporters.

Selected as one of fifteen host venues, and one of two in Sevilla along with Ramón Sánchez Pizjuán, Estadio Benito Villamarín hosted two matches in total: Brazil v Scotland (4-1), and Brazil v New Zealand (4-0). The stadium has also hosted high-level European matches including Champions League group stages during the 2005/2006 season where Betis were drawn against Liverpool, Chelsea and Anderlecht.

As for the future of Estadio Benito Villamarin there are no current plans to renovate or to relocate Real Betis to new facilities. The stadium was completely rebuilt in the late 1990s as an all-seater to comply with updated UEFA stadium regulations, and thus is actually fairly modern.

Below is a seating plan of Real Betis's Estadio Benito Villamarín: 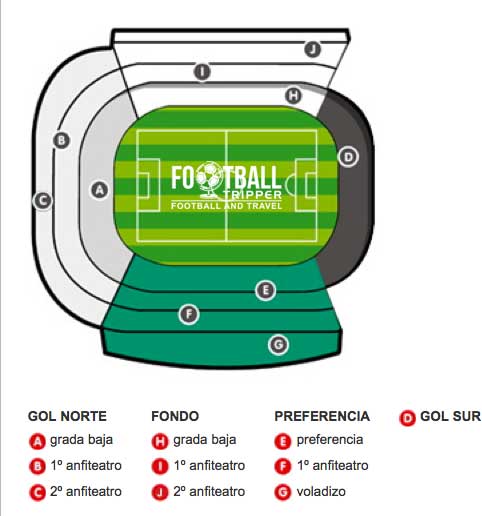 Having opened on the 27th July 2012 according to the site, the stadium shop is the best place to spend your green on green. You can also purchase stuff from the official online Betis store if you can’t be dealing with shopping bags at the time.

Real Betis offer Verdiblancos fans the chance to undertake a tour of the stadium for just €15.00 for adults. Providing that there is room you can turn up on the day and join the tour or if you prefer email [email protected]

Note: As to be expected the tour is closed on bank holidays such as Christmas and New Year’s day as well as Sundays.

How to get to Estadio Benito Villamarín

Where is Estadio Benito Villamarín?

As Real Betis’ ground is located further south than Sevilla’s Ramón Sánchez Pizjuán you could argue that it is in a better location, at least for driving anyway.

All you have to do is look for Exit 8 signposted Sevilla / Avenue La Palmera and follow this until the stadium pops up towards your left.

The main train station in Seville is Santa Justa which is centrally placed and around 5km north of Estadio Ramón Sánchez. It’s a bit too far to walk in my professional opinion but the bus services more than make up for it with numerous stops along avenue de Kansas City which runs parallel to the railway tracks on the Southern side.

Aeropuerto de Sevilla is the main airport for Seville and is approximately 15km North East from the Benito Villamarín stadium.

Known as a purveyor of low-cost airlines, Seville Airport has frequent bus services which can take you to Plaza de Arma which is basically the city centre in 50 minutes for €4,00 which makes transferring over to your hotel pretty painless. Of course, there is always a Taxi.

The closest hotels to Estadio Benito Villamarín are either Villa De La Palmera on the North corner of the roads which surround the stadium or the much larger Silken Al-Andalus Palace which is pretty cheap with decent reviews.

If you want something much more central and closer to the station then I recommend either Ayre Hotel Sevilla, Hotel Abanico, or Hotel Adriano as the wildcard expensive option. Do your own research!

Who plays at Estadio Benito Villamarín?

What is the capacity of Estadio Benito Villamarín?

As of 2022 Estadio Benito Villamarín has an official seating capacity of 60,721 for Football matches.

When was Estadio Benito Villamarín opened?

What is the postcode for Estadio Benito Villamarín?

The postcode for Estadio Benito Villamarín is 41012 .

Covid Restrictions may be in place when you visit Estadio Benito Villamarín in 2022. Please visit the official website of Real Betis for full information on changes due to the Coronavirus.