Constant Vanden Stock Stadium or Constant Vanden Stockstadion is the name of famous Belgian team R.S.C Anderlecht’s stadium. First opened in 1917, and most recently renovated in 1983 the ground which is located in the Brussels Capital Region has a current capacity of 28,063 for Belgian Pro League matches and slightly less for European fixtures.

RSC Anderlecht’s Stadium is named after Constant Vanden Stock who presided over the club’s most successful period in their history between 1971 to 1996. Under his leadership, Anderlecht won a remarkable seven League titles, two Belgium Cups, The Cup Winners Cup, The UEFA Cup twice and The European Supercup. Transforming the relatively small Belgium team into a European Powerhouse who ranked joint first with Juventus in the 1986 UEFA ranking system.

Originally known as the Émile Versé Stadium upon opening back in 1917 after the generous patron helped finance a basic ground on the edge of Parc du Meir or as its known today, Astrid Park. Consisting of a very basic grandstand constructed from wood to begin with, eventually concrete stands were built to satisfy fans in the years proceeding and after the war until the ground was completely rebuilt in 1983 when it became known as Constant Vanden Stock Stadium.

Constructed with a slightly smaller capacity of 28,063 including 6,900 terrace places behind the goals and 21,163 seats including around 2,000 corporate facilities, Constant Vanden Stock set the standard for new stadiums across Europe in the 1980s and it disappointing fans of R.S.C Anderlecht that the ground wasn’t involved in the Euro 2000 tournament.

Today the club under the direction of Roger Vanden Stock are exploring plans to expand the stadium to a 40,000 capacity arena by creating an additional tier of seats above the main stand and adjoining goal end stands. There are rumours that the stadiums naming rights could be sold to the bank Fortis with a name change to “Stadion Fortis” likely to help finance such as project although the muted company are now defunct.

Below is a seating plan of Anderlecht's Constant Vanden Stock Stadium: 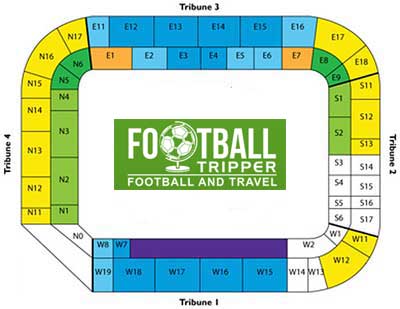 Away fans are usually housed within the south-west of the corner of Tribune 1 within the second tier.

Note: For Champions and Europa League matches away fans are sometimes required to get off one stop before at Aumale Metro Station for security reasons. Check the travel information from your club in order to confirm or deny this is the case for your trip!

RSC Anderlecht’s club shop is located within the north-west corner of the stadium on Avenue Théo Verbeecklaan, and with the exception of the online fanshop, is the best place to purchase official merchandise of the Purple and Whites.

It doesn’t appear as if Anderlecht currently offer stadium tours of the facilities at Constant Vanden Stock. If this ever changes in the future we’ll be sure to update this section.

How to buy Anderlecht Tickets

Tickets to see Anderlecht in action can either be purchased online or in person at the stadium’s ticket office in the week’s leading up to the match.

Guaranteed to be open for at least three hours before kick-off, the ticket office is also open Monday – Friday between 9.00 am – 5.30 pm if you wish you’re in the Brussels for an extended period of time.

How to get to Constant Vanden Stock Stadium

Where is Constant Vanden Stock Stadium?

Constant Vanden Stock Stadium sits 4.6km southwest of Brussels city centre within the district of Anderlecht where the team’s name is derived from. Walkable within the best part of one hour, the easiest way to get to the stadium is undoubtedly via Brussel’s Metro system.

Parking isn’t really encouraged as the stadium is located next to a public park (Parc Astrid) and a leafy residential areas. Westland Shopping Centre north-west of the stadium is potentially one option, however always check the signage for parking restrictions – you will need at least 2.5 hours!

Brussels’ main railway station is known as “Station Brussel-Centraal”, however Brussels-Zuid/Midi (South) is actually larger in size and serves more passengers on a daily basis. As Belgium’s capital, Brussels is well connected to the rest of the country and Europe with Eurostar services.

Saint-Guidon/Sint-Guido located on the yellow Line 5 is the closest metro station to Constant Vanden Stock Stadium.

There are frequent services from the city centre including the metro station at Gare Centrale which is connected to Line 5, but it all depends on your starting point.

Brussels International Airport is located 11km northeast of the city centre, however for a lot of central Europeans getting the train is much easier.

There are no hotels within the immediate vicinity of Constant Vanden Stock which means you should look back towards the train station As Brussels is a large metropolitan city there are plenty of options including familiar and reasonably priced chains such as Park Inn by Radisson, Best Western and Holiday Inn.

What is the capacity of Constant Vanden Stock Stadium?

As of 2022 Constant Vanden Stock Stadium has an official seating capacity of 28,063 for Football matches.

What is the postcode for Constant Vanden Stock Stadium?

The postcode for Constant Vanden Stock Stadium is 1070.

Covid Restrictions may be in place when you visit Constant Vanden Stock Stadium in 2022. Please visit the official website of Anderlecht for full information on changes due to the Coronavirus.