Stayen Stadion is the home ground of Sint-Truidense V.V who earned promotion to the Belgian Pro League after winning the second division title during the 2015 season.

Known as just Stayen to local supporters, the stadium of Sint-Truidense V.V first opened in 1927 and most recently underwent renovation works in 2011 resulting in a major facelift.

Arguably the most important works in Stayen’s history, the ground was expanded to 14,600 and is now very much a modern footballing venue with the north stand even containing a hotel amongst other club run facilities. 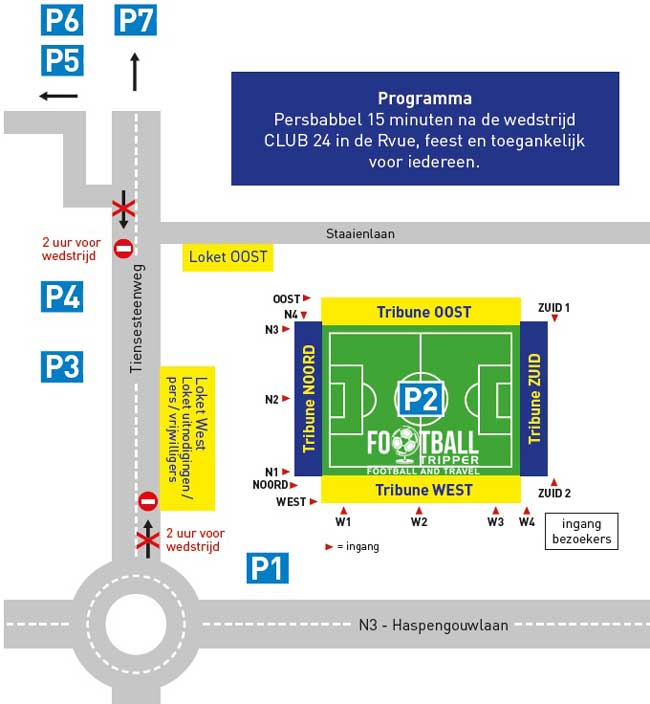 Away fans are generally housed within one half of the Tribune Zuid which is the southernmost goal-end. The main entrance to the away section (Bezoekers) is located in the south-west corner.

There doesn’t appear to be any opening times for the Fan Shop posted on the website of STVV, however the reception which sells tickets is open from 7.00 am to 10.00 pm during the week so you could always pop in and ask.

Alternatively you could instead purchase merchandise of Sint-Truidense V.V from their official webstore.

It doesn’t appear as if STVV currently offer the fans the chance to undertake a guided tour of the facilities at Stayen Stadium.

How to buy Sint-Truidense Tickets

Tickets to see Sint-Truidense play at home can now be purchased online from the official website and as per usual, from Stadion Stayen during the week and before kick-off. The club only tend to sell out half a dozen games per season so you should be ok purchasing tickets on matchday.

Please note that for the top five matches of the season prices increase by  € 5.00 to offset the increased levels of demand.

How to get to Stayen

Stayen Stadium is located approximately 1.7 km west of Sint-Truiden’s historical centre where the Groenmarket is held. Most Football Trippers can walk to the ground from here in under 25 minutes.

There are a total of seven stadiums located at the ground with the above seating plan further up the page actually displaying the locations.

At least three of the car parks operate on a first-come first-served basis on matchdays.

Sint-Truiden Station is within a 15 minutes walking distance of Stayen Stadion. Upon exiting the station turn right and follow the Tiensesteenweg all the way to the stadium.

Built into the northern stand is Hotel Stayen which as the name suggests is a potential place to stay in. The only slight issue may the availability on matchdays but it’s worth enquiring as some of the rooms even overlook the pitch!

Within the city centre there are a few other options with the Hotel-Belle-Vie fairly well priced and minutes away from the station.

What is the capacity of Stayen?

As of 2023 Stayen has an official seating capacity of 14,600 for Football matches.

What is the postcode for Stayen?

Covid Restrictions may be in place when you visit Stayen in 2023. Please visit the official website of Sint-Truidense for full information on changes due to the Coronavirus.