Albertpark is a multi-purpose sports venue located in the Belgian city and municipality of Ostend within the Flemish province of West Flanders. Used predominantly for the football matches of local side K.V Oostende, the ground has a modest capacity of 8,000.

The land on which today’s Albert Park Stadium resides on was first used for football matches back in 1934, with resident team KV Oostende making Albert Park Stadium their home after forming in 1981. Before the merger between the two local sides, AS Osstende KM, one half of the newly formed team played their home matches at Albertpark with VG Oostende playing their home fixtures at Medlar Square Stadium.

Since the formation of K.V Oostende, the quality of football in the local city of Ostend has improved greatly with the club ascending to the top flight of Belgian Football twice four times since the 1990s including two Belgian Second Division Titles in 1998 and 2013, with two further promotion play-off victories in 1993 and 2004.

Upon entering the Belgian Pro League during the 2004/2005 season K.V. Oostende failed to satisfy the leagues new stadia legalisation and were given a grace period of two seasons to modernise the facilities, assuming that the club didn’t succumb to relegation. The club renovated facilities in 2007 to give the ground its current capacity of 8,125 including 5,125 seats.

The renovations resulted in all stands becoming fully covered, the reduction of 3,000 terrace places and the addition of better corporate match-day hospitality facilities with the new grandstand becoming the centrepiece of the whole operation.

During the 2007/2008 season the club also announced further good news when a partnership with Celtic was revealed which would see the Scottish club send up to three reserve or youth team players to play at the newly refurbished Albertpark Stadion per season.

Below is a seating plan of Oostende's Diaz Arena: 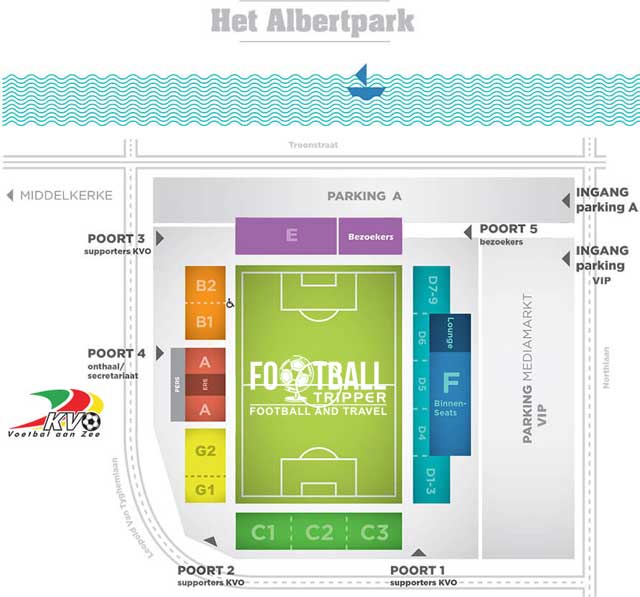 Away fans (Bezoekers) are housed within the eastern corner of the northern goal-end with some home supporters taking up the other half of the stand.

The Fan Shop at Albert Stadium is the place to purchase official merchandise and tickets of KV Ostend as it doubles up as a ticket office during the week.

The fan shop is of course open for at least one hour before kick-off on matchdays, and failing this there is always the official online store.

It doesn’t appear as if there are any guided tours currently available of the facilities at Albertparkstadion.

How to buy Oostende Tickets

Tickets to see K.V. Oostende play at home can either be purchased online from the official website or in person from the ticket booths at the ground which are open on matchdays.

Expect to pay between € 15.00 – € 25.00 for a decent seat in the main stand with prices changing depending on whereabouts you sit and who the opposition is.

How to get to Diaz Arena

Where is Diaz Arena?

Alberpark Stadium is located approximately 3.3 km from the city centre within the district of Mariakerke-Bad.

The official website states that matchday parking can be found at Sleuyter Arena and Media Market which are adjacent to the Wellingtong Golf Club within  Northlaan 13.

Oostende train station is a major transport hub for Belgian rail network and thus you can catch numerous services to around the popular Belgian cities such as Brugge, Brussels and Antwerp.

Ostend–Bruges International Airport is located less than 5.00 km west of the city centre and only a few kilometres inland from the coast which makes it extremely accessible.

Upon landing you either catch a bus into the city or a taxi for around € 10.00.

The closest hotels to Aberparkstadion are less than five minutes away either across the road or on the sea front with the Hotel Les Dunes, and the Glenn two such places to stay.

Less than a mile or so east towards the harbour and railway station there is a much larger cluster of hotels you might prefer to look at. Here you will find accommodation options ranging from the well known Ramada to mid price options such as Hotel Empire and Hotel Burlington.

Who plays at Diaz Arena?

Belgian side Oostende play their home matches at Diaz Arena.

What is the capacity of Diaz Arena?

As of 2023 Diaz Arena has an official seating capacity of 8,000 for Football matches.

When was Diaz Arena opened?

Diaz Arena officially opened in 1934 and is home to Oostende

What is the postcode for Diaz Arena?

Covid Restrictions may be in place when you visit Diaz Arena in 2023. Please visit the official website of Oostende for full information on changes due to the Coronavirus.