Stadion Den Dreef is the 2002 built home ground of local team Oud-Heverlee Leuven. Capable of seating just under 9,500 supporters per match, the stadium is moderately sized and offers an intimate 90 minutes of football.

Written history to be added soon, however as a new ground which opened post-millennium, there’s not really too much to say!

Below is a seating plan of Oud-Heverlee Leuven's Stadion Den Dreef: 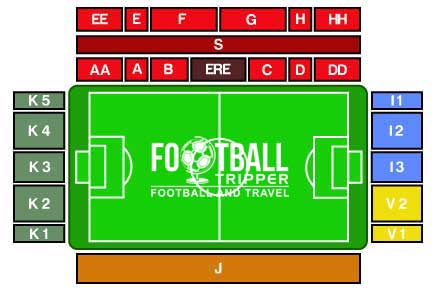 Away fans are housed within sections V1 and V2 which is practically in the north-east corner of the stadium. Tickets for the travelling supporters (bezoekers) cost 20.00 regardless of which team is visiting Den Dreef, and access is granted from Tervuursevest road.

The Fanshop at the ground is only open during the week on Wednesdays and Thursday between 3.00 pm to 5.00 pm. As a result of the limited opening hours you may wish to check out the OHL Online shop instead.

On matchdays the club shop is open for one hour before kick-off, during the half-time interval and once again for one hour after the full time whistle has gone.

It doesn’t look as if guided tours of Stadion Den Dreef are available right now. We’ll let you know if this changes in the future.

Tickets to see Oud-Heverlee play at home can either be purchased online from the official website or from the ticket office during the week and before kick-off providing the match hasn’t sold out.

Den Dreef Stadium is located on Kardinaal Mercierlaan within the Heverlee suburb of Leuven which is a fact reflected in the club’s name.

There is a small car park located at the ground however it’s only for members of the club and season ticket holders. You will instead have to settle for parking within the local area and surrounding streets.

The Heverlee neighbourhood has its own station which is directly connected to Lueven city centre as the first stop on some services departing from the central station.

Brussels Airport located 24 km west of Heverlee and Lueven is the closest major flight hub. Slightly further away at a distance of 63 km is Antwerp International Airport, and Liege (76 km) which both greatly increase the range of travel options.

The closest hotel to Stadion Den Dreef is Begijnhof Hotel Leuven however it is four stars and subsequently not the cheapest. Back towards Heverlee Station there is a more reasonable “Boardhousing” which offers better priced rooms.

Otherwise you’re looking at accommodation options back within Lueven city centre with the Hotel Ibis and Park Inn By Radisson located within a stones throw of the railway station.