Argosstadion Achter de Kazerne is the home football ground of Belgian Pro League side KV Mechelen. Located in the city and municipality of Mechelen in the province of Antwerp, the 13,213 capacity ground’s name literally means “Behind Army Barracks” as it was previously situated on the site of an army base.

Argosstadion was constructed in the early 20th century in 1911 on a plot of land near to a military base, and it immediately came to be known by fans as Achter de Kazerne (behind the barracks) as a result. With the army no longer occupying the land after selling it to Telenet, and KV Mechelen selling the naming rights to sponsors many believed the traditional name of the stadium wouldn’t stick but it has.

The three year period of sponsorship by Scarlet between 2003-2006 saw the stadium come to known as Scarletstadion and marked the first such naming rights sale in Belgian football.

When long term sponsors of KV Mechelen Argos Oil purchased the naming rights in 2009 to help the club battle liquidation, the name of the stadium became Argosstadion Acheter de Kazerne in a move which followed the precedent of former sponsor Veolia who sought to preserve the historic name.

After encountering serious financial problems during the 2002-3 season which saw the club relegated to the third division for entering administration, the club were forced to temporarily sell the Achter de Kazerne. After returning to financial health and repurchasing the ground, plans were announced in January 2013 to expand the stadium to a capacity of 18,500 although there is yet to be progress.

As a club who’s success arguably peaked in the late 1980s when the club won the Belgium Cup in 1987 and the Belgian national Championship in 1988/89, KV Mechelen haven’t really enjoyed European Football since the advent of the Champions League. They did however defeat Ajax in 1988 to lift the European Cup Winners’ Cup which saw the Argosstadion host Italian’s Atalanta in the semi-finals.

Below is a seating plan of Mechelen's Argosstadion Achter de Kazerne: 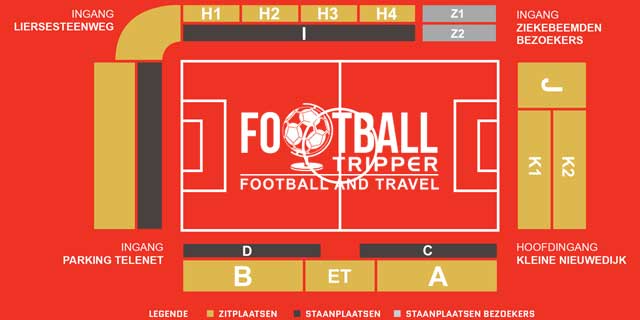 Away fans are housed within the easternmost section of the northern tribune which stretches for the length of the pitch. It is marked on the above seating plan as sections Z1 and Z2 which are greyed out.

The little fanshop at the stadium is only usually open once a week during the season on Wednesdays between 2.00 pm and 4.30 pm, and then proceeds to close to the public over the summer.

On matchdays the fan shop is usually open for up to 90 minutes before kick-off and then once again for 45 minutes after the full time whistle.

You might want to check out the KV Mechelen webstore instead.

There aren’t any stadium tours currently available of AFAS Stadion however expect this to change after the ground is fully renovated in 2016.

How to buy Mechelen Tickets

Tickets to see KV Mechelen play at Achter de Kazerne can either be purchased online or in most cases obtained in person before kick-off providing you allow yourself enough time.

How to get to Argosstadion Achter de Kazerne

Where is Argosstadion Achter de Kazerne?

AFAS Stadion is located 1.7 km north of Mechelen’s historic centre which is the area between Saint Rumbold’s Cathedral and part of the Dijle canal.

The official website of KV Mechelen recommends parking at the following car parks:

Mechelen-Nekkerspoel is the main railway station of the city and it is well connected to the rest of Belgium, sitting in the middle between Antwerp and Brussels.

Mechelen is perfect for Football Trippers as it is pretty much equidistant between two major airports: Brussels (24 km) and Antwerp International Airport (26 km).

Within the ring road which marks the inner sanctum of Mechelen there are at least half a dozen accommodation options worthy of inspection. Some of these are Hotel Den Wolsack, Hotel NH Mechelen, Hotel Mercure and finally Holiday Inn Express which is less than 5 minutes from the ground.

What is the capacity of Argosstadion Achter de Kazerne?

As of 2022 Argosstadion Achter de Kazerne has an official seating capacity of 13,213 for Football matches.

What is the postcode for Argosstadion Achter de Kazerne?

The postcode for Argosstadion Achter de Kazerne is 2800.

Covid Restrictions may be in place when you visit Argosstadion Achter de Kazerne in 2022. Please visit the official website of Mechelen for full information on changes due to the Coronavirus.