Regenboogstadion is a multi-purpose stadium located in the lesser known municipality of Waregem. Used primarily for football matches, the name translates roughly as the Rainbow Stadium with a current capacity of 10,200. It is the current home of professional football team S.V. Zulte Waregem.

Regenboogstadion dates back to the early 20th century when it was used to host the football matches of K.S.V. Waregem since 1925 when the club was formed. Used by various iterations of local Waregem based football teams, the most successful to date is S.V Zulte Waregem who have played at the Regenboogstadion since 1950 and today are the sole tenants of the municipal owned stadium.

Formed officially in 2001 when Zultse VV merged with KSV Waregem the combined fortunates of both teams increased greatly with promotion to the Belgian Pro League achieved after winning the 2004/2005 second division title.

The following season, the Rainbow stadium saw the Zulte Waregem triumph in the Belgian Cup and once again exceed expectations by earning European Football in the guise of the UEFA Cup.

Sadly the Regenboogstadion failed to meet UEFA’s requirements to host such matches and the home games were instead played at K.A.A Gent’s Stadium. With fans missing out at seeing the club take on the likes of Espanyol, Ajax and in the last round of 32, Newcastle, the club’s management explored the viability of either creating a new stadium or renovating existing facilities.

With redeveloped plans green lighted by the local council on the 14th May 2008, construction eventually began on June 2014 with a brand new 3,000 plus capacity stand expected to be finished by the end of the calendar year. Phase 2 will see another stand rebuilt at the end of the 2015 season with phases 3 plus 4 set to tackle the remaining stands planned for 2016 and 2017 respectively. 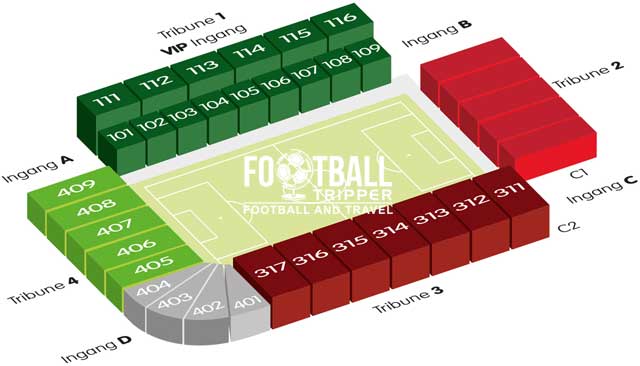 Zulte Waregem operate a fanshop at the Rainbow Stadium in addition to their very own online store.

On Saturday matchdays the fan shop is open between 9.00 am to 12.00 pm and then again for 90 minutes before kick-off as per every other day there is a game on.

It doesn’t appear as if any tours are currently available of the facilities at Regenboogstadion.

How to buy Zulte Waregem Tickets

Tickets to see Zulte Waregem play at Regenboogstadion can either be purchased online from the official website or at the ticket offices at the stadium in the days leading up to the match.

How to get to Regenboogstadion

Regenboogstadion sits adjacent to a lake and recreational park approximately 1.5 km south of Waregem Railway Station and the central area of town within the inner ring road.

Whilst there are officially 200 parking spaces at Regenboogstadion these are reserved for season ticket holders and guests of the club on matchdays. This means you will have to make your own parking arrangements.

Waregem Railway Station sits on the line which connects Kortrijk with Ghent meaning it is well fairly well connected to the rest of Belgium.

The closest major airport to Waregem and Zulte is Lille Airport which is 51 km west across the boarder in France. Within Belgium the nearest International Airport is either in Brussels (90 km) or in Ostend-Bruges (92 km).

The main accommodation option within Waregem is Hotel Ambassade which is a three star moderately priced hotel between the train station and Park Baron Casier. Unless you have a rental car this appears to be the only option within the municipality.

Belgian side Zulte Waregem play their home matches at Regenboogstadion.

What is the capacity of Regenboogstadion?

As of 2023 Regenboogstadion has an official seating capacity of 10,200 for Football matches.

Regenboogstadion officially opened in 1957 and is home to Zulte Waregem

What is the postcode for Regenboogstadion?

The postcode for Regenboogstadion is 8700.

Covid Restrictions may be in place when you visit Regenboogstadion in 2023. Please visit the official website of Zulte Waregem for full information on changes due to the Coronavirus.