The Ghelamco Arena formerly known as Arteveldestadion is a multi-purpose football stadium located in the second largest municipality in Belgium, Ghent. Officially opened on July 17th 2013, the 20,000 capacity ground is the first newly built stadium in the country since 1974.

Ghelamco Arena first opened on the 17th of July 2013 with a friendly match against Vfb Stuttgart with KAA Gent christening their stadium in modest style, defeating the German side 2-0. Construction began on the stadium back in 2008, taking just under five years to complete although in reality the process was much longer with the club’s management expressing a desire to build the new stadium back in May 2003 under the project name of Arteveldestadion.

Replacing Gent’s 1920s built Jules Ottenstadion definitely took the club longer than the anticipated due to various planning permission restrictions but fans of The Buffalos have certainly been rewarded with the modest 20,000 capacity stadium setting the bar for mid-sized stadiums across Belgium and Europe such as Poland’s recently renovated Stadion Miejski Bialystok.

Renamed from the original Artveldestadion after the famous Flemish statesman to Ghelamco , the name of the constructors, a few months prior to opening, KAA Gents Arena is a truly modern football stadium the facilities around the ground used throughout the year instead of just when there are football matches to be played. With the old model which still plagues countries such as Italy becoming obsolete, the stadium was envisioned as providing locals with a mixture of retail and leisure.

The Ghelamco arena was also constructed with considerations towards its ecological footprint and as a result the roof is covered in over 13,000 photovoltaic solar panels meaning the floodlights are mostly powered from a renewable energy source. Not stopping there, the constructors Ghelamco have designed the roof to collect rainwater which is used to irrigate the pitch and the canopy structure inside the ground ensures as much natural light as possible is let in which helps lower the electricity bill.

Below is a seating plan of KAA Gent's Ghelamco Arena: 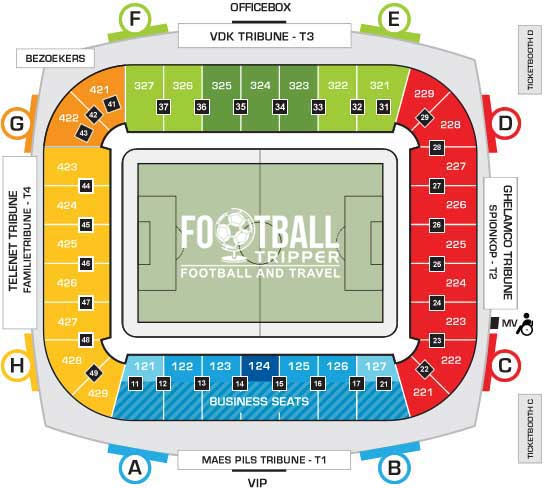 Like the majority of new stadiums, Away fans who make the trip to the Ghelamco are housed within the corner between then the VDK Tribune and the designated family stand.

Referred to as “Bezoekers” which literally translates as visitors, away fans will need to look for Gate G to access the two sections of corner seating numbered 421 and 422.

Note: Inside the stadium you will need a KAA Gent subscription card in order to purchase food and beverages, as the club operate a cashless system.

KAA Gent have a fanshop at the Ghelamco Arena which is easily the most popular way to purchase official merchandise. It doesn’t appear as if the club have an online shop heeading into the 205/2016 season.

Note: on matchdays the club shgop opens for 2 hours between 10.00 am to 12.00 pm, closes, and then reopened from 2.00 pm until kick-off. It also opens for one hour after the full time whistle has blown.

The Buffalo’s offer stadium tours for certain members of the local community such as schools, some fans and disadvantages groups but it doesn’t appear as if they’ve extended this offer out to the general public just yet.

Lasting 90 minutes in total, the tours which run twice a week on Wednesdays and Thursdays are conducted on a non-commercial basis.

How to buy KAA Gent Tickets

Tickets to see The Buffalos in action can be purchased from the box office at the stadium either in the working week leading up to the match or a few hours before kick-off. The club’s online booking facility can sometimes be unreliable, and thus Gent encourage fans to purchase tickets in person.

For more information feel free to contact KAA Gent by calling 09 / 330.23.00 or sending an email to [email protected] Note: there is anywhere from a €5.00 – €10.00 price increase when Club Brugge, Anderlecht and Standard come to town.

How to get to Ghelamco Arena

Where is Ghelamco Arena?

Parking around the immediately vicinity of the stadium including private businesses is generally reserved for local fans who purchase parking permits for their carpool arrangement. If you must drive then consult this page which has information regarding car parks located out of town.

Ghent consists of five railway stations in total with Gent-Sint-Pieters Station being the largest of them all. Very much an international railway station, it has direct connections to Bruges, Brussels, Antwerp, Lille and even Brussels Airport.

Situated 3.5km north of KAA Gent’s ground, the walk becomes a slightly more manageable 45 minutes for those who are travelling from out of town.

Many fans who visit Ghent do so via Brussels International Airport withthe two city’s connected via a high-speed train service which takes just over 30 minutes.

Within the business park where Ghelamco Arena is situated there is a Holiday Inn Express and a Hotel Campanile Gand which are both fairly reasonably priced. Geared more towards business traveller than football fans, and located out of town, you may however wish to look at something more central!

Who plays at Ghelamco Arena?

What is the capacity of Ghelamco Arena?

As of 2022 Ghelamco Arena has an official seating capacity of 20,000 for Football matches.

When was Ghelamco Arena opened?

What is the postcode for Ghelamco Arena?

The postcode for Ghelamco Arena is 9000.

Covid Restrictions may be in place when you visit Ghelamco Arena in 2022. Please visit the official website of KAA Gent for full information on changes due to the Coronavirus.