Stade Maurice Dufrasne or Stade de Sclessin as it is commonly known as after the district it is located in, is a purpose built football stadium located in the city of Liège. Dating back as far as 1909, the stadium has a current capacity of 30,023 and is home to Belgian Pro League team Standard Liège.

Standard Liège’s stadium was first opened in 1909 and was immediately named in honour of the club’s fifth president Maurice Dufrasne who oversaw the club’s move to the new ground and would be in charge for the next twenty years until 1931.

Initially consisting of a few poor quality stands, Maurice Dufrasne oversaw the stadium’s growth to a 20,000 capacity stadium by 1925 and helped set the standard of expansion with a further 10,000 seats added in 1940.

By 1971 Stade Dufrasne’s highest capacity was reached when it could accommodate 43,000 seated fans with the priority then changed towards modernisation in the 1980s, and 1990s with each three out of four stands being completely rebuilt. Galvanised by the Euro 2000 Tournament which Belgium was co-hosted with Netherlands, the stadium was transformed into a state of the art 27,500 capacity all seater stadium.

Stade Maurice Dufrasne hosted three group games including Norway against Yugoslavia and Denmark against Czech Republic. In 2009 Standard Liège again wished to develop their stadium with a view to host a major sporting tournament such as the 2018 World Cup but this time Belgium were unsuccessful. As a result the redevelopment plans were scaled down from 50,000 to around 40,000.

The ground is commonly known , and more often than not referred to by fans as Stade de Sclessin after the district in which Liege and the stadium is located. Situated in an industrial area next to steel mills, the ground is sometimes known as “Sclessin Caludron” with fans drawing comparisons between the melting of metal and the intense fiery atmosphere inside Stade Maurice Dufrasne on matchdays.

Below is a seating plan of Standard Liège's Stade de Sclessin: 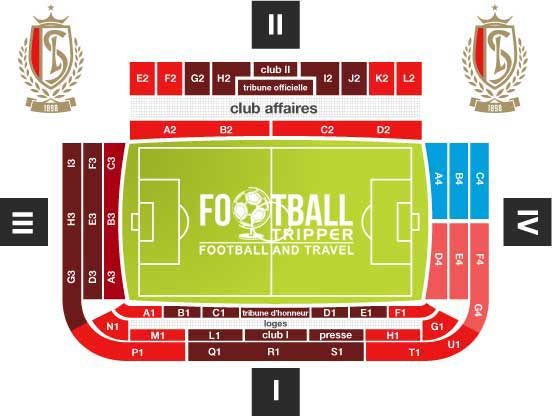 Away fans are housed within sections A4, B4 and C4 as highlighted in the above seating plan by the colour blue. This stand is generally referred to as the Meuese Side after the adjacent river, and is capable of accommodating up to 1,332 visiting supporters per match.

We can’t currently find the opening times for Standard Liege’s club shop so you may wish to visit Planet Rogue instead which is the official online store.

Guided tours of Stade de Sclessin are available Monday to Friday across two slots at either 10.00 am or 2.00 pm, and usually last up to 90 minutes which means that the tours are fairly comprehensive.

The stadium tours cost € 3.50 per person, however the catch is that they’re only available for groups in excess of 25 people which means they’re more suitable for schools and workplaces, and they’re only given in French.

How to buy Standard Liège Tickets

Tickets to see Standard Liege in action at their famous home can be purchased online from the official website or in person from the ticket office at the stadium Monday to Friday 1.30 pm – 5.30 pm and if there’s any tickets remaining, before kick-off.

Please note that there is a price premium of anywhere between €5.00 – €11.00 when you purchase tickets for the highest profile games. Standard Liege currently categories the top matches as being against Anderlecht, FC Bruges, KC Genk, KAA Gent and Charleroi.

How to get to Stade de Sclessin

Where is Stade de Sclessin?

Stade Maurice Dufrasne sits on the northern bank of the River Meuse in an industrial area approximately 5.0 km from Liege’s historical centre.

There are a number of on-site car parks located around Stade de Sclessin however the exact matchday arrangements are unclear. Undoubtedly one or two of them will be operating on a first-come first-served basis so get there early to take advantage of this.

The closest railway station to the stadium is simply called Sclessin however you will likely find that it isn’t well served with trains on matchdays which you means you may wish to take the bus (see below).

The city’s Liège Airport is an international class flight hub with numerous airlines operating out of it including Thomas Cook who are the most prominent.

It is located 10km west of the city within the area of Bierset and upon landing you can catch either the number 57 to the train station or 53 to the city centre.

You won’t find any hotels in the area around the stadium with Hotel Ibis south of the E46 past the University of Liege a reasonable shout for those who have a car.

Otherwise you’re looking back towards the the city centre and central train station where there is plenty of varied choice to suit all budgets. Three mid range hotels are the Best Western, Eurotel, and Le Cygne D’Argent.

Who plays at Stade de Sclessin?

What is the capacity of Stade de Sclessin?

As of 2023 Stade de Sclessin has an official seating capacity of 30,023 for Football matches.

When was Stade de Sclessin opened?

What is the postcode for Stade de Sclessin?

The postcode for Stade de Sclessin is 4000.

Covid Restrictions may be in place when you visit Stade de Sclessin in 2023. Please visit the official website of Standard Liège for full information on changes due to the Coronavirus.