Stade du Pays de Charleroi is a football stadium located in Charleroi, Belgium, which is the 5th most populous city in the country. Constructed in anticipation of the 2000 UEFA Euro Championships with an initial capacity of 30,000, the stadium has since been reduced to 15,000 for matches of local team Sporting Charleroi.

First opened in 1939, Stade Charleroi was originally known as Stade du Mambourg until 1999 when work was carried out to prepare the ground for Euro 2000 which was to be co-hosted by Belgium and Netherlands.

Home to Royal Charleroi Sporting Club since at least 1923 when there were no facilities besides the pitch, the ground remained sparse until the 1980s when a grandstand was finally constructed to consolidated the seating which was spread out across four small bleachers.

During the Euro 2000 competition the stadium hosted three group games including FR Yugoslavia v Slovenia, England v Germany and then against Romania. With the two latter matches attracting sell out crowds of 30,000 spectators which is more than Royal Charleroi generally attract for their home fixtures, the stadium was reduced in capacity after the tournament to 23,186 with the removal of the third tier of the main stand.

After the tournament Stade de Charleroi was used to host the UEFA Cup matches of now dissolved Belgian team R.A.A. Louviéroise including one famous match against Portuguese giants S.L Benfica which ended in a 0-0 draw. The most recent renovation to Stade du Pays de Charleroi Charleroi came in the 2012-2013 season when parts of the ground received a facelift following complaints from local residents.

The municipality of Charleroi decided to further remove the upper tiers from the remaining stands which has reduced the current capacity to 17,824, with the club planning to move away from the built up residential area to a new 25,000 capacity stadium at Marchienne-au-Pont dubbed “Porte des Sports”.

Below is a seating plan of Charleroi's Stade du Pays de Charleroi: 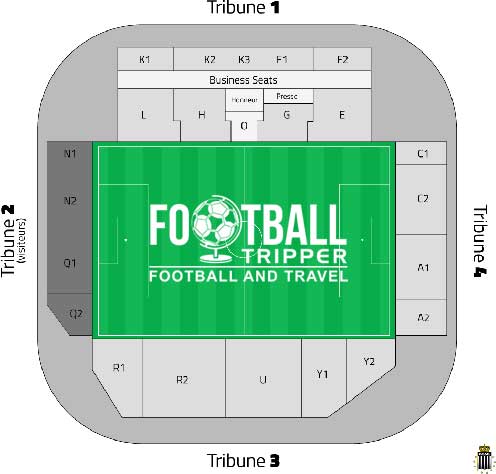 Away fans are housed within the entirety of Tribune 2 which is the southernmost goal-end. Depending on the expected size of the travelling contingent, the visiting supporters can either be housed within Q1 and Q2 or N1 and N2.

Sporting Charleroi’s fan shop at the stadium which acts as the main place to purchase official merchandise of the Zebras as the club don’t currently run an online store.

On matchdays the fan shop is open for a few hours before kick-off and then once again for half an hour after the full time whistle.

It doesn’t appear as if tours are currently available of the facilities at Stade du Pays de Charleroi.

How to buy Charleroi Tickets

Tickets to see Royal Sporting Charleroi in action at home can either be purchased online from the official website, in person from the club shop in the days leading up to the match and from the ticket offices on the day of the match assuming the game hasn’t sold out.

Please note that the above ticket prices reflect the standard ticket prices when purchased in advance of the match. Tickets purchased before kick-off carry a charge of anywhere between 2.00 – 3.00 euros, as do the high-profile games against Standard and Anderlecht.

How to get to Stade du Pays de Charleroi

Stade du Pays de Charleroi holds the distinction of being one of those rare breeds of urban stadiums as it is located just 1.0 km from the city centre.

Located in a dense city location there is a distinct lack of on-site parking at Pays de Charleroi which means you will have to park up in the local neighbourhood and walk the distance.

The city is served by two railway stations however of the two Charleroi-Sud (South) is considered the main one rather than Charleroi-Ouest (West).

The closest airport is “Brussels South Charleroi Airport” which is just 6 km north of the city centre, however it lacks the same number of airlines and routes as Brussels International Airport which is 71 km away.

Charleroi’s accommodation options are all to be found more or less in the area between Boulevard Audent and La Sambre River where the main station is. Three well priced options are the Hotel Ibis, Leonardo Hotel and Hotel De La Basse Sambre which is slightly further out.

What is the capacity of Stade du Pays de Charleroi?

As of 2022 Stade du Pays de Charleroi has an official seating capacity of 14,891 for Football matches.

What is the postcode for Stade du Pays de Charleroi?

The postcode for Stade du Pays de Charleroi is 6000.

Covid Restrictions may be in place when you visit Stade du Pays de Charleroi in 2022. Please visit the official website of Charleroi for full information on changes due to the Coronavirus.