The Martínez Valero Stadium first opened on September 8th 1976 with Elche CF hosting a friendly match against the Mexican National team which ended in an entertaining 3-3 draw. Designed by famous Spanish architect Juan Boix Matarredona to replace the ailing 1923 constructed Campo de Altabix, Elche’s new home is the largest sports stadium in the Alicante region, which highlights its importance to the local community.

As one of the more modern stadiums at the time, it was included as part of Spain’s bid to host the 1982 World Cup and it hosted three group stage matches: Belgium v Hungary (1-1), Belgium v El Salvador (1-0) and Hungary v El Salvador (10-1) which is famous for being the largest scoreline in the history of the competition to date. With the international pedigree firmly established, Martínez Valero has gone on to host matches matches for the national team with La Furia Roja beating every opponent they have faced at the stadium which includes the likes of Belgium, Ukraine and Italy.

In 2003, Elche’s Estadio was one again in the spotlight, this time hosting the Copa del Rey final which was contested between Recreativo de Huelva and RCD Mallorca which resulted in a 3 nil win for Los Bermellones (The Vermilions). Following the club’s return to the top flight of Spanish football in 2013/2014, management has pledged significant investment in the facilities at the stadium with modernisation seen a as a priority by president José Sepulcre.

Work began in June 2013 and finished in February 2014 with numerous improvements made including a new stadium façade, new office and changing room facilities, new Hospitality and VIP boxes,  and reconfiguration of seating in the stadium to make it more comfortable and safe for both sets of home and away fans.

Below is a seating plan of Elche's Estadio Manuel Martínez Valero: 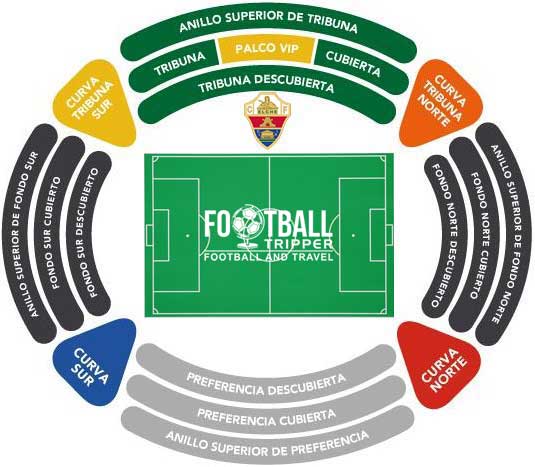 Away fans who make the trip to Elche’s stadium are housed within the thin strip in the Cuva Norte known as the Anillo Superior de Fondo Norte which is accessible via gate 18.

Reminiscent of the away section at Estadio El Madrigal, the seats are right at back of the stand at the furthest part away from the pitch in relatively steep seating arrangment The main difference however is that there is no roof cover!

The city centre of Elche/Elx is pretty compact which means you could easily spend the afternoon hitting a few local sports bars after arriving in on the train before walking to the stadium.

The map below outlines some of the most popular ones in the local area.

The closest dining option to Martinez Valero is undoubtedly Brutus Elche with a whole range of options available towards the North west of the Stadium along avenue a’Alacant.

Examples include El Charro Mexicano, Restauarante Telepizza and Restaurante Hong King which highlights the diverse influence on the cuisine within the city.

If you’re looking for more traditional dining options then there are lots of Spanish restaurants to choose from within the city centre which is west of the stadium. Alicante cuisine has its historical ties with Middle Eastern culture and the proximity to the Mediterranean meaning seafood and fish are often at the heart of the menu.

There is an official store located at the stadium known as La Tienda del Elche in addition to Elche’s official online store.

Currently there is no information regarding stadium tours.

How to buy Elche Tickets

To buy tickets you can either do so at the club shop at Estadio Martínez Valero in the days leading up to the match, at the ticket windows a few hours before kick off or book online using an approved reseller.

Ticket Prices can vary depending on where you are sat and who the opponent is but as an approximate guide, Elche CF state the following prices per area for adults:

How to get to Estadio Manuel Martínez Valero

Where is Estadio Manuel Martínez Valero?

Manual Martinez Valero is based towards the East of the city centre, approximately 4km away from Parque Municipal and Universitat Miguel Hernandez d’Elx which are arguably two of the most central reference points.

If you are driving by car, then it is more than likely that you are travelling from the North in which case along the A7 motorway. T

There is a space for an estimated 1,800 cars at the stadium within the official on-site carparks.

You can get to Elche using the Cercania C1 train line which operates between Alicante and Murcia, as well as regular trains which leave from Valencia taking 90-120 minutes.

Alicante-Elche Airport (6th Busiest in Spain) can be found 9km Southwest of Alicante, and it is surprisingly busier than Valencia/Manises Airport (8th) which you would assume would serve more passengers due to it being attached to a larger city, but isn’t.

Once at the airport, you can reach the city via numerous bus services and taxi/car rental, with the N-338 road being your friend. Currently the city authorities are exploring the viability of a train or metro line but there is no official announcement as of yet.

The closest hotel to the stadium appears to be the Ibis Alicante Elche which is nearish to a McDonalds, if you’re into that.

Besides this, the rest of the hotels are typically congregate towards the West of the city with Hotel Huerto del Cura and Tryp Ciudad De Elche being but two suggestions.

What is the capacity of Estadio Manuel Martínez Valero?

As of 2023 Estadio Manuel Martínez Valero has an official seating capacity of 39,000 for Football matches.

What is the postcode for Estadio Manuel Martínez Valero?

The postcode for Estadio Manuel Martínez Valero is 03208.

Covid Restrictions may be in place when you visit Estadio Manuel Martínez Valero in 2023. Please visit the official website of Elche for full information on changes due to the Coronavirus.