Estadio Gran Canaria is a multi-purpose outdoor sports arena located on the island of Gran Canaria within the city of Las Palmas. Used predominantly for the football matches of local team Unión Deportiva Las Palmas, S.A.D, the 2003 built ground has a current capacity of 31,250.

Estadio Gran Canaria first opened in 2003 in order to replace Estadio Insular which first opened in 1949. Capable of seating 21,000 supporters, by the time Estadio Insular closed it was fully serviceable but beginning to show its age. Representing the Canary Island’s as the largest stadium, it was simply time for an upgrade and the local council got to work.

Designed by two architects: Pedro Medina and Guillermo Ortego Carretero, Estadio Gran Canaria initially featured an athletics track around the perimeter of the pitch. Envisioned as a multi-purpose sporting arena, this dream all but disappeared less than 10 years after opening when it was revealed that it would be removed.

Expecting to take the best part of 16 months, renovation work began on 11th November 2014. The work will see additional seating placed on top of the athletics track in order to make Estadio Gran Canaria more intimate. Expected to increase the capacity of 33,070 there is no official word as to whether or not the pitch will be lowered as per the Eithad Stadium and West Ham’s new ground.

The inaugural football match was played on 8th May 2003 between UD Las Palmas and RSC Anderlecht. Contested in front of a 32,000 plus sell out crowd, the hosts defeated their Belgium guests 2-1 courtesy of a goal from striker Rubén Castro.

As well as hosting matches of the Canary football team, Gran Canaria stadium has even also hosted International matches of Spain. The match against Northern Ireland on 21st November 2007 for example was a qualification match for Euro 2008.

Below is a seating plan of Las Palmas's Estadio Gran Canaria: 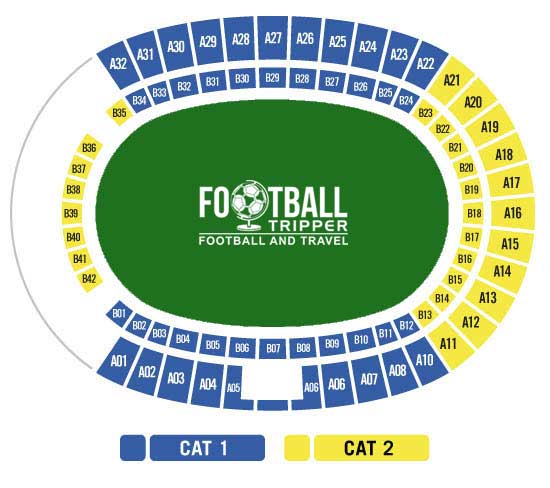