The original Estadio José Zorrilla was built in 1940 and was eventually replaced 42 years later when Spain were chosen to host the 1982 World Cup with modern facilities greatly needed. Officially opened on the 20th February 1982, Valladolid took on Athletic Club (Bilbao) and defeated the visitors 1 nil with a goal by Jorge Alonso. As well as being used for the remainder of the team’s league matches, the stadium hosted in the 1982 Copa del Rey Final as a precursor to the World championships, with Real Madrid defeating Sporting de Gijón 2-1.

During the Summer of the World Cup, José Zorrilla hosted three group matches: Czechoslovakia v Kuwait, France v Kuwait and France v Czechoslovakia. Although England were also in this group as well and finished first, all three of their games were played at Estadio San Mamés in Bilbao so fans may be unfamiliar with this Estadio.

Since the World Cup, the stadium has undergone slight modifications most famously due to exposed sides which earned the ground the nickname Estadio de la Pulmonia (Stadium of Pneumonia) amongst fans of the club. Consisting of a single bowl-shaped tier of around 30,000 capacity,  the club eventually enclosed the North end in 1986 giving the stadium the shape of a horseshoe with a capacity increase to 37,500.

In the 1990s following a mandate from UEFA and Liga de Futbol Profesional, the stadium had to be converted to all seater which decreased the capacity to the current 26,512. Currently there plans to expand the stadium to 40,000 capacity, which have been dubbed “Valladolid Arena” but as of yet, there hasn’t been much progress.

Below is a seating plan of Valladolid's Nuevo José Zorrilla: 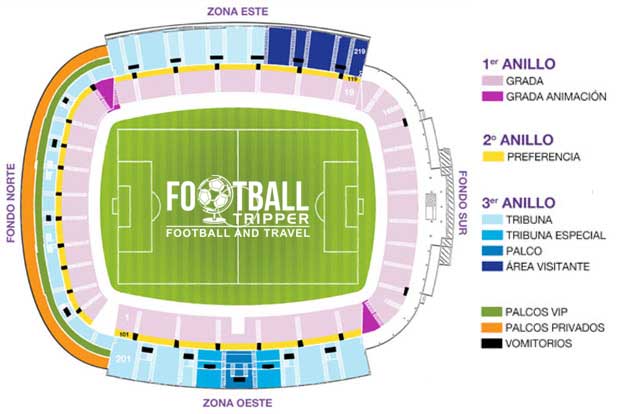 Real Valladolid operate 4 club shops throughout the city with the largest being at the stadium itself.

No information is currently available regarding Stadium tours of Estadio Nuevo José Zorrilla, but if any information comes to light, we’ll be sure to update.

How to buy Valladolid Tickets

Tickets to see Real Valladolid can either be purchased Online before your trip, or at the “taquillas” (Ticket windows) either on the week leading up to the match or up to a few hours before kick off, depending on the level of demand for the tickets – obviously the larger teams such as Barcelona and Madrid attract more interest from football fans.

Price range for tickets is anywhere between €23.00 for a seat behind the goal at either the North or South stands and approximately €50.00 for a fairly decent seat along one of the main grand stands.

How to get to Nuevo José Zorrilla

Where is Nuevo José Zorrilla?

Estadio José Zorrilla is based 4km West out of town with the club detailing a range of transport options you can take here.

Lastly if all else fails you can get a taxi or drive yourself to the stadium using a rental car where you will find over 1,500 parking spaces available for cars as well as a large supermarket across the road which offers at least another 500 spaces.

As José Zorrilla is adjacent to the A62 Autovía de Castilla” motorway and can be reached via exit 127 signposted as Parquesol/Estadio with the address for satnav being: Avenida del Mundial 82 s/n, 47014 Valladolid

Valladolid train station is around 30 minutes away by foot and is pretty close to the river with Calle Puente Colgante from Calle de Recondo outside the station leading you across the easily recognisable Iron bridge. Once you have crossed it’s simple a case of following Avenida del Prado Monastery in a straight line until you can see the stadium. Pretty straightforward and easy to get your bearings as you are essentially heading in a straight line from the station westwards!

Valladolid Airport-Villanubla is located 11 km North West of the Stadium and around 15km from the city centre. As the 28th largest Spanish airport by passengers volume, there isn’t an extensive range of international destinations served, but there are a number of internal flights from Barcelona, Ibiza and Málaga which can easily fill this gap, and allow you to watch some Spanish Football!

Who plays at Nuevo José Zorrilla?

What is the capacity of Nuevo José Zorrilla?

As of 2023 Nuevo José Zorrilla has an official seating capacity of 26,512 for Football matches.

When was Nuevo José Zorrilla opened?

What is the postcode for Nuevo José Zorrilla?

The postcode for Nuevo José Zorrilla is 47014.

Covid Restrictions may be in place when you visit Nuevo José Zorrilla in 2023. Please visit the official website of Valladolid for full information on changes due to the Coronavirus.