Estadio de Mestalla is the home stadium of Valencia FC with a capacity of 55,000 seats, making it the fifth-biggest ground in Spain. First opened in May 1923, the venue is famous for its steep terraces and vocal home support which can create an intimidating atmosphere for some teams.

The Mestalla stadium first opened to football fans on the 20th May 1923 with Valencia hosting local rivals Levante UD in the inaugural match. With an initial capacity of 17,000, Estadio de Mestalla replaced Valenciaâ€™s first home, AlgirĂłs which lacked the necessary facilities to propel Los MurciĂ©lagos (The Bats) onto the centre stage of Spanish football.

Unfortunately the Spanish Civil war put the brakes on any progress for the club, and Mestalla was used as a concentration camp and storage facility meaning that the stadium became into a state of disrepair until the early 1940s. After a lot of renovations, Valencia won their first cup title in 1941 with the Copa del Rey after defeating Espanyol, followed by a succession of three league titles and two further league cups.

With this onward momentum, the club drew up plans for expansion dubbed â€śGran Mestallaâ€ť which took the capacity up to 45,000 in the 1950s before another disaster befell the club, in the form of a flood, when the nearby Turia Riverâ€™s banks burst in 1957. Once the club restored the pitch, the next decades were characterised by consistent, small improvements and a new bottom tier to accommodate more fans for the 1982 World Cup.

Since the 1970s Valenciaâ€™s management have always flirted with the idea of relocating the stadium to a new site, but plans have been thwarted by adverse economic conditions and lack of investment. Rather farcically,Â Los Che have begun to construct a Nou Mestalla with an expected capacity of 75,000 but the project has been temporarily abandoned with the basic concrete structure very much a proverbial elephant in the room.

Still, the current Mestalla is the fifth largest stadium in Spain, and continues to host important matches such as 2011 and 2014 Copa del Rey final, both contested by Barca and Real Madrid, Los Merengues.

Estadio Nou Mestalla was set to be the new home of Valencia, and successor to the current Mestalla but as of 2021 it is yet to be complete.

Construction began in 2007 but was halted due to the global financial crisis or more broadly.

Valencia enters into discussions with the city council to resume construction in October 2017, with a targetted 2022 open time.

However given the global Covid Pandemic this is certainly going to be unlikely.

Below is a seating plan of Valencia's Estadio de Mestalla: 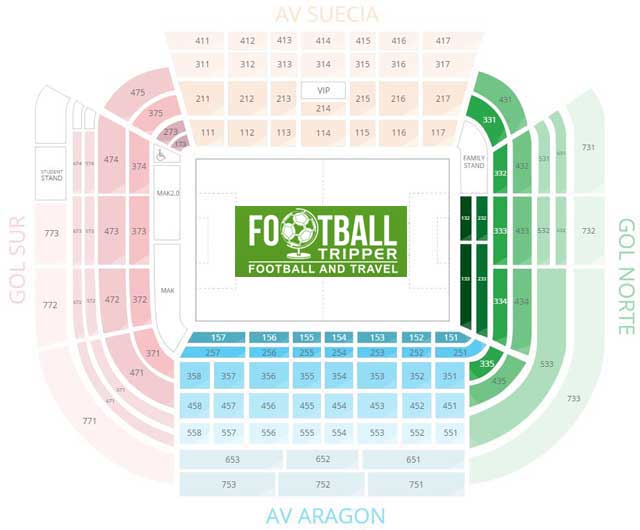 Away fans are housed within the upper tier of the north-east corner â€“ at least for European matches such as against Stoke FC in 2012 where the size of the travelling contingent is much larger than domestic games.

The tier is quite steep with numerous safety barriers but it really helps the Mestalla retain a sense of intimacy despite the outdoors design of the ground.

The map below outlines five of the most popular sports bars and Irish pubs in Valencia, both around the city centre and close to Estadio de Mestalla. The stadium is located close to the University Campus which is usually a good sign.

Within the immediate vicinity there are a few choices such as Alejandro del Toro, Restaurante Belmonte or Favela Bar Restauarant which can all be found on roads adjacent towards the Southernmost stand of Mestalla.

Valencian cuisine is mainly dominated by seafood and meat, with the famous Spanish dish Paella hailing from the region as well as ArrĂ˛s negre (Rice and Squid, with ink) and Gaspacho, the raw/cold soup. All three are worth a try if youâ€™re into your food but there are also plenty of other options available to try.

Valenciaâ€™s online club store states that there are six stores throughout the city, but unfortunately there isnâ€™t many clues to their exact locations as the addresses listed are slightly ambiguous.

Valencia offer fans of Los Che the chance to takeÂ  an exclusive tour of the stadium for no more than â‚¬10.00 (Adults â‚¬9.80, Concessions â‚¬7.40 and members â‚¬5.30). Lasting for approximately 45 minutes, the club are opening the doors to the stadium before they relocate to the Nou Mestalla in the coming years.

Note:Â  Tour are only open up to 5 hours before kick-off with no dressing room access. To book tickets you can either do so online, or at any of the Valencia shops. On the day walk ups are fine but subject to availability.

How to buy Valencia Tickets

Tickets to see Valencia play can be obtained online, at one of the cash-machine sale points or at one of the several club shops scattered throughout the city.

Los MurciĂ©lagos have one of the highest stadium occupancy rates in Europe and although there might be some tickets for sale on the gate. it helps if you book in advance, gauge the demand based on opposition and not just turn up a few hours before kick-off!

Based on a match against S.D Eibar ticket prices range from around â‚¬15.00 for a seating behind the goal up to â‚¬60.00 for something central, with the average price probably being around â‚¬35.00. Remember tickets are likely to cost more depending on who Valencia are playing!

How to get to Estadio de Mestalla

Where is Estadio de Mestalla?

Estadio de Mestalla is situated approximately 1.8km north-east of Valencia city centre, even less if you are near to the famous Cathedral.

As there are endless places you can drive to get to the Estadio, I canâ€™t possible cover all routes and journey suggestions!

Situated in a dense urban neighbourhood, parking at the stadium is severely limited with the closest good sized car park appearing to be at the nearby University. Unfortunately Valenciaâ€™s official website doesnâ€™t confirm if this is suitable for football fans or not.

The main train station in Valencia is known as EstaciĂłn del Norte (Spanish) or EstaciĂł del Nord (Valencian) and is situated next to the Plaza de Toros which is the cityâ€™s bull killing arena.

Around 2km West of the Stadium, as stated above you can walk to the ground in 20 minutes or either choose to take a taxi (outside station), Metro (lines 3 and 5), or bus (Number 10 inÂ Ayuntamiento square, opposite station) depending on what way you are inclined.

Like a lot of Spanish cities, the metro is a pretty cheap and efficient way of getting around town, with the AragĂłn stop, on line number 5 probably being the closest to the stadium.

Remember if you arenâ€™t at a station which is on line number 5 then just transfer across to it and work out how many stops it will be. There are maps at every station and inside carriages.

The main airport of Valencia is Manises which lies 12km West of the football stadium. Serving over 5 million passengers a year across 15 European countries, Manises Airport is the 8th busiest in Spain and full of everyoneâ€™s â€śfavouriteâ€ť cheap airline providers.

Once you touch down on Spanish soil you can get to the city either via the A-3 AutovĂ­a motorway, the Metrobus or Aerobus which will take you anywhere between 20-40 minutes depending on the number of stops or the old faithful metro service with lines 3 or 5 doing the job adequately.

As a large city, and popular tourist destination Valencia has a lot of choice when it comes hotel options for tourists, so itâ€™s best to work what whatâ€™s important to you.

For hotels near the Mestalla ground, try either the Hotel Renasa or Westin Valencia . For hotels which are central and near the station check out Zenit Valencia and VLC Habitat Centro. Or disregard this and check out a map yourself.

Who plays at Estadio de Mestalla?

What is the capacity of Estadio de Mestalla?

As of 2022 Estadio de Mestalla has an official seating capacity of 55,000 for Football matches.

When was Estadio de Mestalla opened?

What is the postcode for Estadio de Mestalla?

The postcode for Estadio de Mestalla is 46010.

Covid Restrictions may be in place when you visit Estadio de Mestalla in 2022. Please visit the official website of Valencia for full information on changes due to the Coronavirus.