The City of Manchester Stadium known by its sponsorship name of The Etihad is the home ground of Man City F.C.

It currently has a capacity of 47,805, with the clubs owners currently exploring the feasibility of expansion to 61,000.

The City of Manchester Stadium was originally constructed for the 2002 Commonwealth Games but was later converted into a dedicated football ground – a move which was planned as far back as 1998.

Built by ArupSport at a cost of £112 million to replace Maine Road, the initial capacity was only 38,000, with 16,000 of the seats being contributed by temporary stands.

Aiming to avoid the mistakes of other converted athletics stadiums such as Stadio Delle Alpi, the reconfiguration work cost £42 million in total and was jointly financed by both the club and the council.

It resulted in the lowering of the pitch and the removal of the running track with a capacity of 46,000.

At the time The Citizens didn’t have any money, and the relocation to world-class facilities for around £20 million was regarded as a major coup.

In 2008 when the blues were purchased by the Abu Dhabi United Group, the stadium would soon become known as The Etihad as part of a multimillion pound sponsorship deal with Sheikh Mansour’s Etihad Airways.

The billionaire owners are currently looking to bridge the gap with Manchester United’s Old Trafford and other English stadiums such as The Emirates by increasing the capacity of the ground to 62,170.

This will be achieved in two phases with the the South Stand’s third tier completed over the Summer of 2015. Currently for domestic match days the stadium has a capacity of around 50,000.

View of The Etihad

Below is a seating plan of Man City's The Etihad: 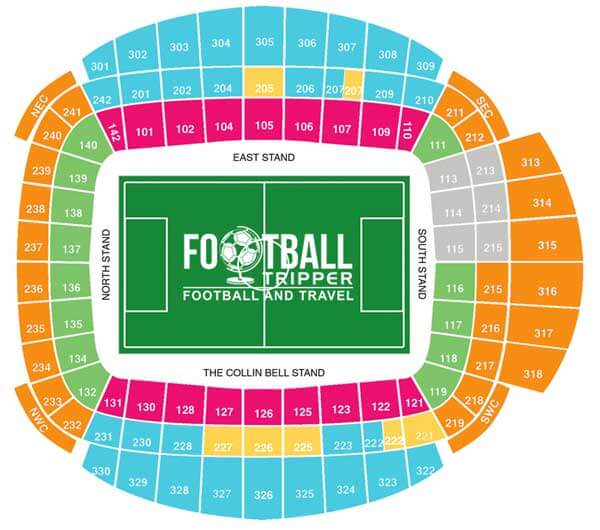 The Etihad is comprised of the following four sections: The Family Stand (North), The East Stand, The South Stand and the Colin Bell Stand (South).

The Etihad Away End

Supporters who make the trip to the Etihad Stadium are housed within one central block of the South Stand.

Situated behind one of the goals, the away section follows the same pattern of the rest of the ground with a two-tier seating structure which gives fans the choice of whether they want to be closer to the action or have a better overview of the entire pitch.

The state-of-the art stadium provides decent views throughout with the cantilever roof ensuring that there are no problematic support beams.

Leg room in the away section is probably just-above average with the blue plastic seats on the whole pretty comfortable – not that away fans generally sit during the match.

Before kick-off there is an excellent outdoor area known as the Summerbee Bar which gives the away fans a pleasant and fully-covered place to drink on-site.

Within the well-sized concourse itself which is accessed by the electric turnstile, there are further kiosks which serve up a decent range of food and drink options.

The area immediately around the stadium is pretty barren but Manchester city centre is alive with pubs and restaurants at every corner – you only need to exit Piccadilly or Victoria train station to see this is the case.

The Printworks near Victoria is usually popular with away fans as is the Yates’s near to Picadilly.

There are a handful of pubs dotted around the Etihad Campus which you might want to give a miss, as they are generally reserved for the local home supporters and aren’t located on the most welcoming of roads.

To the east of the ground there is a McDonalds restaurant which is predictably popular on matchdays, with the nearby Asda Superstore a decent tonic for those looking for something slightly healthier.

South of the ground on Ashton New Road there are a few independently run chippies.

As mentioned previously at the stadium there is an outdoor “festival style” area sometimes referred to as Summerbee bar.

It is a family-friendly space with a decent selection of pre-match grub ranging from Pizza and Burgers, to Curry and Chips.

Manchester City operate two club shops in addition to their own online store which local fans can use to click and collect. The most popular CityStore is of course the one at the stadium.

City offer fans the chance to embark on a 70 minute tour of the Etihad covering everything from the press conference room, the home players dressing room, the tunnel, the pitch and even the managers chair.

Prices are £14.00 if you’re an adult, or £10.00 for everyone else, with under 4s being allowed to enter for free when accompanied with a paying adult.

How to get to The Etihad

Where is The Etihad?

Etihad Stadium is 1 and a half miles East of Manchester city centre and takes between 20-30 minutes walk from Piccadilly station.

The Etihad Stadium’s address for satnav is as follows:

Due to the out of town location and forward thinking stadium planners, parking is available at the ground at £10.00 per car or £20.00 for a minibus.

If you want a cheaper option, there are a number of “unofficial” carparks which operates along the main roads which are slightly cheaper at around £5.00 – £7.00 per vehicle.

Manchester is served by four train stations in Piccadilly (The largest one), Oxford Road, Deansgate and Victoria.

The Stadium is approximately 20-25 minutes from Piccadilly Station and the walk is quite intuitive due to the “Sportcity” road walk which is like an extended boulevard built in preparation for the Commonwealth Games.

Public Transport of The Etihad

Manchester Airport is 11 miles away from the Etihad and once you have landed you can either choose to get a cab from the airport for around £25 or catch the train to Manchester Piccadilly Railway station.

Services usually run every 10 minutes or so, and take approximately 20 minutes.

Hotels Near The Etihad

The City of Manchester Stadium is towards the east of the city in not a very well built up area for hotels. Think out of town shopping area, minus the shopping.

As a result, it’s probably advisable that you book one of the usual suspects such as Holiday Inn, Travelodge, Premier Inn, Ibis, a little closer to your train station and Manchester city centre.

Who plays at The Etihad?

English side Man City play their home matches at The Etihad.

What is the capacity of The Etihad?

As of 2023 The Etihad has an official seating capacity of 55,017 for Football matches.

When was The Etihad opened?

What is the postcode for The Etihad?

The postcode for The Etihad is M11 3FF.

Covid Restrictions may be in place when you visit The Etihad in 2023. Please visit the official website of Man City for full information on changes due to the Coronavirus.