Maine Road was home to Manchester City F.C for over 80 years with the club occupying the stadium from its construction in 1923 to its closure in 2003. From the 2003-2004 season onwards Man City have moved to the City of Manchester Stadium, popularly known as the Etihad for sponsorship reasons.

Having hosed every kind of match from FA Cup semi-finals and Charity Shields to matches of the national football team, Manchester City’s ground quickly earned the nickname of The Wembley of the North. Whilst not as grand as the original Wembley Stadium, Maine Road had an impressive 84,569 capacity its in hey-day, even holding the record for highest home attendance in English Football which was set during a sixth round FA Cup match against Stoke City.

The first match ever to be held at Maine Road took place against Sheffield United on the 25th August 1923 with the home side christening their stadium with a 2-1 victory. 8 years later, the first of many renovations took place when the corner between the Main grandstand and the Platt lane end was rebuilt in order to add a roof. This small cosmetic change set the tone for the future development of the ground, in which the final appearance resemblance a mishmash of differently proportioned stands.

After the Second World War, Manchester United temporarily shared Maine Road with Manchester City after Old Trafford was damaged during the Blitz, a fact United fans would perhaps rather forget. After the publication of the Taylor Report in 1990, the final standing match took place on 30th April four years later with the Kippax Terrace subsequently demolished and rebuilt. The remaining three stands were set to be renewed but following Manchester City’s descent down the Football League, plans were shelved.

The 2002-2003 season was to be the final year The Citizens were to play their home matches at the historic ground with the club electing to move to the brand new City of Manchester Stadium which was constructed for the 2002 Commonwealth Games. With the council giving the new stadium a generous 200 year lease, Manchester City only had to pay the £30 million football conversion cost which saw the removal of the athletics track amongst other things to improve the spectator experience.

Below is a seating plan of Man City's Maine Road: 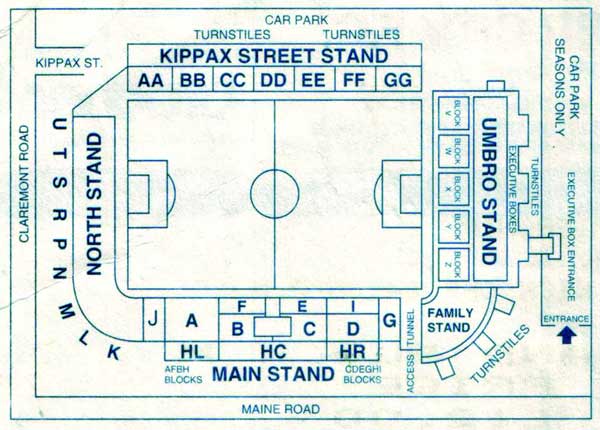 How to get to Maine Road

Where is Maine Road?