Stadio Atleti Azzuri D’Italia in Bergamo, Italy is a stadium home to Atalanta and AlbinoLeffe football teams. The ground has often attracted criticism for being outdated, with restricted views, old facilities and no roof cover but as of yet, there have been no confirmed commitments to redevelop the site.

Stadio Atleti Azzuri d’Italia first opened in 1928 when it was named after Mario Brumana who was a fascist soldier from the Imagna Valley in the foothills of the Alps of Bermao. Regarded as martyr by the far right and followers of Mussolini, the 1920s saw the construction of several stadiums named after fascist figures including the communal stadiums in Florence, Rome and Torino.

With an original capacity of just 12,000, the ground’s inaugural fixture was held between Atalanta and Triestina on 23rd December. Rather predictably The Atleti Azzuri d’Italia has undergone several renovations throughout the 20th century including the addition of a roof over the main stands, the repositioning of the stands closer to the pitch and the construction of the two current Curvas.

The majority of these changes occurred just in time for the start of the 1984/1985 season when Atalanta returned to Serie A, with the stadium’s record attendance set at the start of the season on September 16th in a match against Inter Milan. Attracting just over 43,000 supporters, it’s unlikely that this record will ever be beaten with modern safety standards reducing the current capacity to just under 26,000.

For the 2003/2004 season lowly minnows Albino Leffe moved into the stadium after they gained promotion to Serie B with their former stadium no longer meeting league standards in terms of capacity. Despite their attendances averaging less than 3,000 per year, Atalanta’s stadium in Bergamo was deemed the most suitable and the two club’s entered into a ground sharing agreement.

In recent years the future of The Atleti Azzurri has been called into question after Atalanta commissioned a feasibility study in 2003 for the prospect of moving into a newly built out of town stadium. With little progress since this public announcement, it’s looking like both clubs will remain here for the short-term future.

Below is a seating plan of Atalanta's Stadio Atleti Azzurri d’Italia: 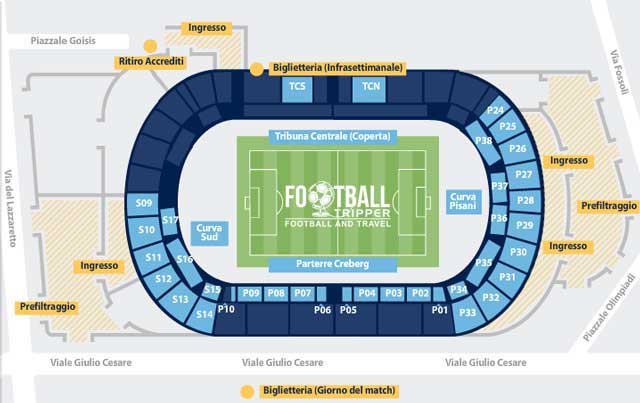 Away fans are housed within the south-west section of the ground which is located behind Atleti Azzuri’s main car park and is accessible from both Piazzale Goisis and Via del Lazzaretto which run south of the ground. Usually confined to two blocks of seating towards the left-hand side of the goal which are separated by fencing, the picture of the stand posted above gives a great impression of what the area looks like.

Capable of accommodating around 1,000 supporters, the away section within the stand is very much a stereotypical Italian affair with no thrills whatsoever.

Although the lack of roof isn’t the end of the world due to the relatively warm climate, the distance from the pitch and the sheer amount of fencing certainly leaves a lot to be desired. On the occasions where Atalanta’s ground is sold you, the away fans can definitely feel caged in!

Although you will find quite a few bars and restaurants from which you can purchase alcohol from in the city centre, there are also quite a few places located around the Stadio Azzuri, and on the roads between the ground and Bergamo University.

Like most Italian Stadiums there isn’t a wealth of food and drink options outisde the ground  with Bar Stadio di Marino Gianluca on Viale Giulio Cesare to the right of Curva Sud being one option, as well as ristorante pizzeria Garden 1986 behind Curva Nord being another.

Inside there are 5 refreshment points typically located in the centre of the concourse (2 for main stand) within the stands but if you want to sample authentic Lombard cuisine you’re best off waiting until after the match.

There is no official information available on Atalanta’s or AlbinoLeffe’s website concerning the club shop but one would assume that they will have some merchandise on sale during matchdays either at or around the stadium.

Failing this you can always order online by visiting https://store.atalanta.it/ or https://www.albinoleffe.com/store with the latter requiring you to send an email to [email protected] with the email title “Order Store at UC Albinoleffe”.

Neither club offer stadium tours of the Azzuri d’Italia with your best bet simply being to go to a match and walking around to take it. Neither club has it’s headquarters at the stadia, so there’s isn’t much to see anyway – something which is unlikely to change until the club relocates to more modern facilities I suspect.

How to buy Atalanta Tickets

Tickets to see Atalanta can be purchased online, at the stadium’s ticket office located on Viale Giulio Cesare, and from approved sellers around the town such as Lis Lottomatica Bergamo and Credito Bergamasco bank.

How to get to Stadio Atleti Azzurri d’Italia

Where is Stadio Atleti Azzurri d’Italia?

Stadio Atleti Azzurri d’Italia is located 1.5-2km north of Bergamo although it is on much higher ground than the historic city centre meaning the walk is slightly more arduous than it seems after simply glancing at the map.

Parking wise the Atleti Azzurri d’Italia has a few car packs surrounding each stand but there isn’t a wealth of space, meaning that you will have to get their reasonably early if you want to get a prime spot. A restricted traffic zone (Zona a traffico limitato) is in place for match days which may restrict direct access via car.

Bergamo railway station is located on the Lecco-Brescia railway line at the Piazza Guglielmo Marconi which is south of the city centre. As the town is quite small there is no smaller satellite train station you can get off at in order to get to the stadium more quickly.

Walking to the stadium will take you 30-40 minutes depending on how quick your pace is with the bus being much easier.

Surprisingly it is the 4th busiest airport in Italy with low-cost airlines reappropriating it as Milan Bergamo Airport in order to increase the glamour and perceived distance to the popular tourist city.

To get from the airport to the city you can either drive, get a taxi or one of the frequent shuttle buses which connects the terminal to the city centre in under 20 minutes.

The closest hotel to Stadio Atleti Azzurri d’Italia is probably the Accademia B&B which is just off the Viale Giulio Cesare , straddling the right hand side of the ground.

The Best Western hotel Piemontese is your best bet if you want something close to the station and the Hotel Santa Caterina is a pretty decent location if you want somewhere between the two.