Buck Shaw Stadium is a 11,500 capacity purpose-built Soccer stadium located in Santa Clara University campus in California. The small ground has been home to Major League Soccer side the San Jose Earthquakes since 2009 and was the former home of the now defunct Santa Clara Football team.

Please Note: San Jose Earthquakes moved to the Avaya Stadium at the start of the 2015 soccer season, and no longer use the Buck Shaw Stadium.

Buck Shaw Stadium first hosted a sporting event back on the 22nd September 1962 when it hosted an American Football Match between The University of California, Davis, and Santa Clara. It would continue to host football games until 1992 and baseball matches until 2005 when it was converted to a dedicated Soccer Stadium with the removal of the baseball infield, dugouts and backstop.

Since the formation of the San Jose Earthquakes back in 1994 the club have long looked for a permanent home and on the 26th October 2007 an announcement was made that they would be using the Buck Shaw from the 2008 season onwards. This prompted investment in the existing facilities in order to satisfy Major League Soccer’s stadium legislation.

Firstly, the stadium’s capacity was upgraded from 6,800 to 10,300 with the pitch shifted slightly in order to be closer to the main grandstand to create a more intimate match day experience.  As the turf would be getting more use, a more durable artificial blend of grass was added to the pitch with an improved drainage system installed to yield a more reliable playing surface.

Costing just over $4 million USD in total, the spectator experience was also made better with the installation of a state of the art sound system, television screen and lightning facilities. Of course, make-shift stands were also erected allowing the club to sell merchandise and refreshments to visitors in addition to press-facilities.

Below is a seating plan of San Jose Earthquakes's Buck Shaw Stadium: 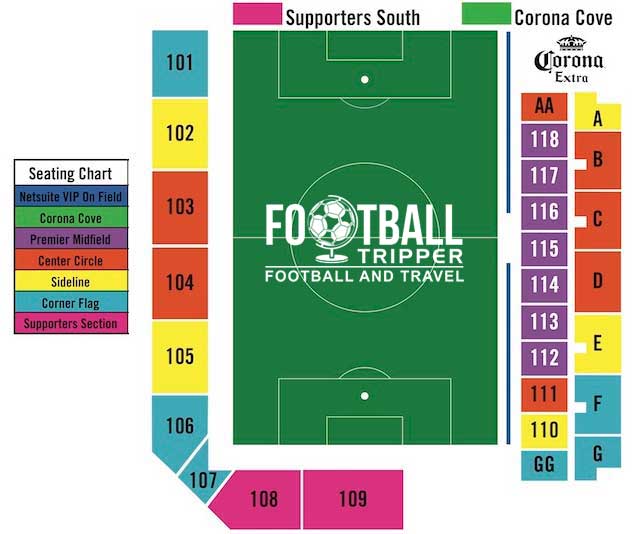 Towards the south-east corner of the pitch there is there are a series of marques which includes a V.I.P Tent and the Beer Garden which is sponsored by Corona. This is your best bet if you want to grab a cold one before the game.

There are also beer tens located within the gated area behind the stands at either goal-end.

Next to the outdoor beer garden there is a designated BBQ area which typically has vendors selling grilled meat options. Scattered around the ground are a handful of smaller kiosks which sell the expected range of fast food such as fries, burgers and hot dogs.

Very much a university built stadium there really aren’t many permanent constructions besides the stands themselves, and thus the club shop is more like a club stall. It is located within the “vendor” area towards the southern part of Buckshaw Stadium on the spare Stanton soccer field.

It doesn’t appear as if the operators of Buck Shaw stadium currently offer fans the chance to undertake guided tours of the facilities.

Standard ticket prices to see San Jose Earthquakes play at the Buck Shaw are as follows:

How to get to Buck Shaw Stadium

Where is Buck Shaw Stadium?

Buck Shaw is located within the leafy grounds of Santa Clara University in California.

There are car parking located on Santa Clara University campus however they are shared with members of faculty and students. Although they are generally less busy on weekends when soccer matches are generally held, you may wish to get their early to avoid stress.

The main designated one for Soccer matches situated is south-west of Buck Shaw Stadium, and is accessible from Palm drive just off of El Camino Road State Route 82.

The closest hotel to Buckshaw Stadium is undoubtedly the Candlewood Suites Silicon Valley, however it is also the most expensive. You’re much better off following the university campus onto The Alameda Road where there is the likes of Valley Inn San Jose and a Best Western.