Bursa Atatürk Stadium is a multi-purpose stadium located in the large north-western Turkish city of Bursa, belonging to the Marmara Region. Home to Süper Lig staple side Bursaspor since first opening in 1979, the 25,213 capacity ground is mostly used for football matches.

Bursa Atatürk Stadium has been the home ground of Bursaspor since 1979, however the site’s usage for football supposedly dates back to 1930 when a stand capable of accommodating 300 supporters was erected for a local amateur football team.

The ground slowly developed over the first half of the 20th century, and really came into its own in the 1970s when local governor and architect Hasim Iscan put together the first design for the stadium. Sometimes described as being hexagonal in shape, it is more commonly described as oval, and is built very much in the Turkish municipal mould of other stadiums of the time.

After Bursaspor won the Turkish Super League in the 2009/2010 season and automatically qualified for the Champions League, the ground was renovated in order to meet UEFA’s stadium Regulations. Drawn in a group with Man United, Valencia, and Rangers, the Bursa Ataturk’s capacity was increased to 25,213 and the exterior was remodelled.

As for the future of Bursa Atatürk Stadium it appears that Bursapor aim to eventually relocate to a brand new stadium capable of seating 45,000. Revealed to the Turkish Press back in 2009, the stadium is known as the Timsah Arena (Crocodile Arena), and construction began on June 1st 2011 with a 2016 deadline appearing to be the most realistic.

Below is a seating plan of Bursaspor's Bursa Atatürk Stadium: 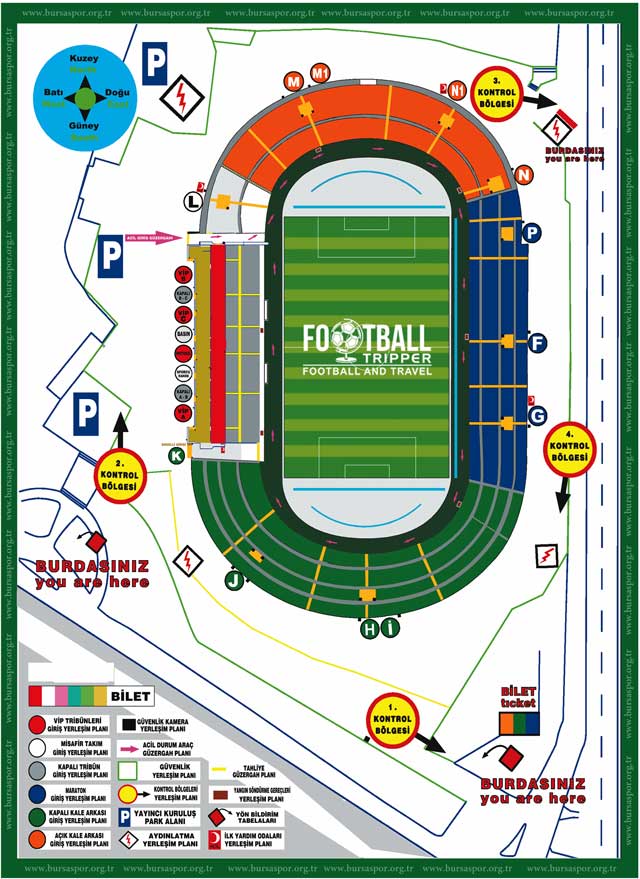 How to get to Bursa Atatürk Stadium

Where is Bursa Atatürk Stadium?