Stade Chaban-Delmas, formerly known as Stade du Parc Lescure until 2001 is the home stadium of Ligue 1 side Bordeaux. The current capacity is 34,462 following expansion for the 1998 World cup in France and the ground is famous for having one of the longest tunnels in Europe, 120 metres!

Originally built in 1930 as a velodrome, the impending World Cup of 1938 meant that Stade du Parc Lescure as it was then known, would have to be reconfigured to host football matches in order to accommodate the large number of matches in the tournament.  Hosting three matches in total, all featuring Brazil, Czechoslovakia, and Sweden. Parc Lescure was a popular venue and remained largely untouched for the next 50 years which was testament to the quality of the French Stadium.

In 1985 in a match between Girondins de Bordeaux and Juventus a record attendance of 40,200 was set in a European Champions Cup semi final with the Italians winning 3 nil on this occasion. The first major redevelopment occurred in 1987 when the cycling track was finally removed with the stands expanded towards the pitch which increased visibility for spectators, and the second renovation occurring in the mid 1990s in preparation once again for the 1998 World Cup.

Hosting five matches featuring the likes of Scotland, Italy, Norwegian Grounds, Chile, and Croatian Stadiums, Parc Lescure was renamed to Stade Chalban-Delmas in 2000 to honour the former mayor of Boredeaux, Jacques Chaban-Delmas. The future of the stadium however appears uncertain with FC Bordeaux announcing plans to build a new stadium located in Bordeaux-Lac in July 2011.

The new 43,000 seater stadium set to be known as Stade Bordeaux-Atlantique which will be used as one of the playing venues of Euro 2016 will then likely see Stade Chaban-Delmas be re-purposed as a slightly smaller Rugby stadium for local side Union Bordeaux Bègles.

Below is a seating plan of FC Bordeaux's Stade Chaban-Delmas: 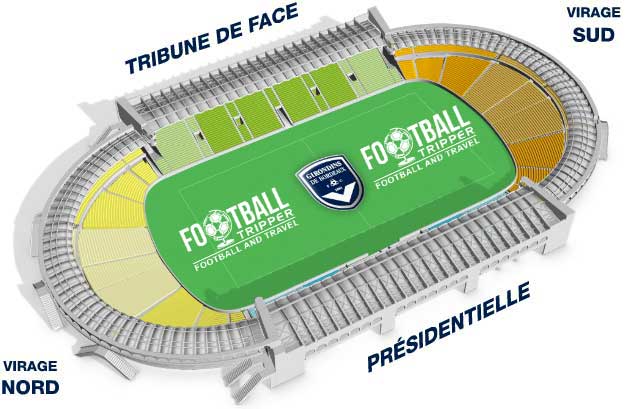 Enjoying a relatively central location with Bordeaux, fairly close to the downtown area fans can frequent a good number of pubs before kick-off and still enjoy a relatively short journey to the stadium. The map below outlines some of the more popular pubs.

As Bordeaux is a major wine growing city and region of France, it would be foolish not to include a small part on what you can expect to drink. Red wines from the local region include: Cabernet Sauvignon, Merlot, Cabernet Franc, Petit verdot, Malbec, and, less popularly, Carménère.  White wines in Bordeaux are generally Sauvignon blanc, Sémillon, and Muscadelle, all of which are named after the blend of grapes used in production.

Directly around the stadium there is a McDonald’s if you want to grab something quick and dirty, or Comptoir d’Ornano and Restaurant La Tocade if you fancy something more authentically French. Even though you’re likely to get the Metro line to the stadium, thus bypassing a lot of the dining options enroute, it is worth nothing that you will encounter a lot of places North-East of the stadium.

FC Girondins de Bordeaux operate 4 club shops throughout the city in addition to their official online store. The most popular store is the one located at Stade Chaban-Delmas itself located on Boulevard Du Marechal Leclerc.

For a full list of FC Bordeaux club shops and their respective opening times List of Bordeaux FC Shops.

Currently there are no stadium tours available for Chaban-Delmas but you can view a 360 panorama of the pitch and facilities here which is quite cool.

Expect Stadium Tours to be offered at the new stadium after Euro 2016.

How to buy FC Bordeaux Tickets

Tickets to see Bordeaux play football can either be purchased Online, via the telephone if you speak French (+33 (0) 892 68 34 33) or in person at the various places across the city known as Francebillet or Ticketnet sales points.

At the stadium itself you can purchase tickets in the week leading up to the match or even on the gate up to two hours before kick-off as Les Girondins rarely sell out home matches. Of course, this depends on whether or well you handle spontaneity; I’d much rather book my tickets in advance for example.

Depending on the profile of the opposition, Girondins de Bordeaux price their tickets differently ranging from category 4 for the smaller teams which have just been promoted, and category 1 for the most popular clubs in France such as PSG, and Marseille. Generally you will pay anywhere between €15.00 to  €55.00 for a less popular match and around €20.00 to €75.00 when the big boys come to town.

How to get to Stade Chaban-Delmas

Where is Stade Chaban-Delmas?

Stade Chaban-Delmas is located pretty centrally if you use Le Bouscat (North), Cenon (East), Bègles (South) and Pessac (West) neighbourhoods as four points on a compass. Within the actual city centre where the City Hall is it is less than 2km away which makes it very accessible to fans.

The city of Bordeaux is considered an important part of France’s motorway infrastructure as it is connected to Paris (A10), Lyon (A89) and Spain (A63), giving it excellent transport links in Europe. Before entering the city you will enter “Rocade” which is a 45km ring road which is often pretty busy. From there you can reach the stadium by following signs for the city centre and “Centre Hospitaliers” and then the Boulevard of Bordeaux.

The address for satnav is: Place Johnston, 33000 Bordeaux

There are two medium sized car parks 2 minutes north of the stadium along Boulevard Georges Pompidou although it is advised that you get there early as the surrounding streets are often closed on matchdays.

The main railway station of Bordeaux is Gare de Bordeaux Saint-Jean (Gare St Jean to locals) and is approximately 4km east of Stade Chaban-Delmas. Serving over 4 million passengers a year, Bordeaux is connected to a whole host of national and European destinations via SNCF which is France’s high speed railway line, meaning you can get to Paris in no less than 3 hours.

Bordeaux is served by Bordeax-Mérignac international Airport which is the 9th largest in France. Located in the area of Mérignac which is 12km West of Bordeaux within the Gironde administrative area, and transporting just under 5 million passengers a year. You can reach the city centre a Jet’Bus shuttle service or the stadium by using Bus 49 which takes you to Hôpital Pellegrin (5 minutes away).

If you have a rental car then follow the A630 autoroute and take the 11b exit or failing this you can get a taxi. Lastly, there are plans for a tramway system but as of 2014 this is still yet to be built.

The closest hotels to Chaban-Delmas Stadium are undoubtedly Appart-City Bordeaux Centre and Hotel Alton, but as the tramway is so efficient, it’s probably worth looking for something more central. Hotel Continental and Hotel Gambetta are both reasonably priced, with Acquitain and Hotel Du Faisan cheap and close to Gare Saint-Jean train station.