Parc des Princes is the home stadium of mega rich French team Paris Saint-Germain (PSG) who have just signed Lionel Messi to partner his ex-Barcelona team mate Neymare ahead of the 2021/2022 season.

With a capacity just under 49,000 it is the fourth largest stadium in the country, although with lots of investment going into players for the club, it would come as no surprise if the owners didn’t fancy upgrading the stadium whose last renovation was in 1972.

Parc des Princes was incredibly built in the 19th century way back in 1897, just 8 years after the Eiffel Tower was finished, with the purpose of providing the city of Paris with a modern multi-purpose sports arena for both Rugby and Football matches, with a Vélodrome occupying the land until the 1960s.

The Opening inaugural game was held between Olympique de Marseille and SC Bastia on 4th June 1972, with Marseille triumphing 2-1 in the Coupe de France final, complete with ceremonial opening courtesy of then French President Georges Pompidou.

A year later newly formed Paris Saint-Germain moved into the stadium, and the rest as they say, is history.

Following on from the successful hosting of the European Cup final between Bayern München and Leeds United (2-0) n 1975 and 1981 between Liverpool and Real Madrid (1-0), the French FA put the venue forward as part of the bid for the 1984 European Football Championships which the country successful won.

Parc des Princes not only hosted two group matches but also the cup final, which saw France beat Spain 2 – 0 in scenes cheered on by millions across the country. Fourteen years later, the stadium was one again used for a major tournament, this time the 1998 World Cup. This time Stade des Princes hosted four group games, a round 16 match and the third place play off, but not the cup final.

PSG’s new owners are currently contemplating the future of the stadium, but for now it looks like the club will remain at the iconic venue as the country hosts Euro 2016 Finals. The FFF needs to ensure all grounds are ready to host matches – something which could be jeopardised by relocation or large scale remodelling.

Below is a seating plan of Paris Saint-Germain's Parc des Princes: 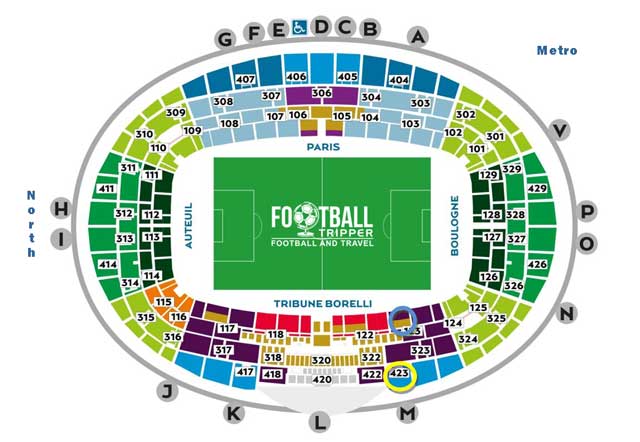 Away fans are housed within the north-west corner of the stadium between Tribune Auteuil and She Presidential Stand. Accessible via the northerly rue Claude Ferrère the standard allocation of tickets appears to be 2,000.

This was the case for Chelsea’s Champions League encounter back in February 2015 however for domestic matches it wouldn’t surprise me if it was much less.

As one of the most famous European capital cities you can expect to find a diverse range of bars, cafes and pubs throughout every district of Paris.

The area of Boulogne-Billancourt where Parc-Des Princes was formerly an industrial area but is now on average one of the most wealthiest communes in the city. This means the area is somewhat gentrified with plenty of pleasant places to drink nearby.

Two of the most popular bars amongst home supporters are Les Deux Staes and Aux Trois Obus which are located north and south of the ground respectively towards the eastern side on Boulevard Périphérique.

Close to the northern train station there are a good number of Irish Pubs and Sports bar to check out as well before you hop onto the metro.

Although situated a few km from the city centre, there are numerous restaurants around the local neighbourhood with Elysées Hong-Kong and Chez Michel being two highly rated options. Paris has a strong Café culture and these are very popular places to grab a drink and a small snack between meals and you will find many around Parc des Princes.

Away from the stadium, the historic city centre has an excellent culinary reputation with a vast choice of fine dining options, although be sure to practice your French!

There are three official PSG stores throughout Paris: Parc Des Princes, Champs-Elysées and one at Paris-Orly Airport in addition to the club’s official online boutique. However as to keep this guide lean we’re only going to list the opening times for PSG’s store at the stadium:

Paris Saint-Germain offer fans the chance to go on a 60 minute stadium tour of the legendary Parc des Princes and see restricted areas first hand such as the players’ dressing rooms, the press room, VIP boxes and the burgeoning trophy room.

Stadium tours generally take place on Wednesdays, Fridays and Saturdays, but they also take visitors around the Parc des Princes during school holidays (except the day before a match and on match days themselves).

For more information and to book your tour you can either phone the club on 32 75 (0.34€ per min), come to the main entrance of the stadium and purchase a ticket at the PSG customer service area.

How to buy Paris Saint-Germain Tickets

Tickets to see PSG play at home can either be purchased online, or in person at stadium itself in the days leading up to the match you wish to attend.

In the past you could easily acquire tickets before kick-off but since PSG have become a rich club attendances have slowly increased. With sell-outs not as uncommon as they once were you might want to purchase in advance.

Price wise watching football in France’s capital city can be pretty expensive compared to other regions of France with the cheapest tickets starting at around €35.00 for a seat behind the goal, and up to €90.00 for a prime seat in the main grand stand.

Tickets become even more expensive when the big boys from Europe come to town.

With Lionel Messi joining PSG ticket prices on the secondary resellers market have already gone through the roof with tickets against Strasbourgh (his first home game) reportedly going for over €1,500 euro each.

How to get to Parc des Princes

Where is Parc des Princes?

Parc de Princes is placed just outside of Paris’ ring road Périphérique which makes it located on the outskirts of town. It sits 4.2 km Southwest of the iconic Eiffel Tower and 9 km from the historical centre meaning that it’s not really walkable.

Driving in Paris certainly isn’t one of the most pleasant experiences in the world but if you must drive your car to the Parc des Princes it could be a lot worse as the stadium isn’t that central within the city, and is located near to the city’s ring road (Périphérique).

Parc des Princes lacks an official car park which isn’t ideal which means you’ll need to drop your car off at one of the independently run garages within the local area. Both nearby metro stations have car-parks nearby, with Zenpark Porte de Saint-Cloud, Parking Bellefeuille and Parking Q-Park Boulogne-Billancourt Parchamp representing three such nearby parking lots.

Located centrally within Northern France, Paris is well connected to the rest of Europe including the UK with high speed rail networks serving no less than 6 train stations within the city:

Depending on where you’re travelling from you’re likely to arrive at a different station, with each station generally serving the clock-wise area it is located within.

Paris has the superb Métro system and stations can be recognised by the prominent “M” sign outside or the Art Nouveau style station entrances if you’re culturally inclined.

Paris boasts three airports to it’s name with no real winner in terms of being the “best”: Charles de Gaulle International is the largest and most well known with services by major international flight carriers whereas Orly International Airport and Beauvais tend to be favoured amongst the budget airline providers.

There is far too much choice in Paris when it comes to Hotel that it’s difficult to give recommendations that are likely to be favoured amongst all readers of this article.

For proximity to Parc des Princes stadium you have a Holiday Inn and Radisson Blue Hotel nearby, both of which have prices of over £100 a night. Cheaper options include Hotel Murat at £54, and Alpha Hotel Paris at £71.

All four choices whilst accessible definitely don’t allow you to make the most of Paris as a city due to the size of the beast, and as a tourist you’re much better planning a hotel near to your arriving/departing train station e.g Hotel le Rocroy near Gare du Nord.

Who plays at Parc des Princes?

What is the capacity of Parc des Princes?

As of 2023 Parc des Princes has an official seating capacity of 47,929 for Football matches.

When was Parc des Princes opened?

What is the postcode for Parc des Princes?

Covid Restrictions may be in place when you visit Parc des Princes in 2023. Please visit the official website of Paris Saint-Germain for full information on changes due to the Coronavirus.