Stade Francis-Le Blé is the home ground of regular Ligue 2 and occasional Ligue 1 side Stade Brestois 29. First opened in 1922, the stadium’s capacity is currently set at 15,097 although the record attendance was recorded as 21,619 back in 1986 against Olympique de Marseille.

Stade Francis-Le Blé first opened in 1922 with the first stand inaugurated a year later on 9th February with a match between Armoricaine and Stade Français. Known as Stade de Armoricaine at the time, the stadium would later be renamed in tribute to Francis-Le Blé. Formerly the mayor of Brest, the popular figure in the local community and fan of Stade Brestois sadly died in 1982.

Originally capable of accommodating just 1,800 supporters, there was no impetus to expand Stade Francis-Le Blé until the 1980/1981 season when Stade Brest were crowned Champions of Ligue 2 Group B. Set to play football in France’s top flight, expansion work was carried out across the course of a season and was completed a year later in 1982.

Completed in 1982, the stadium’s capacity was increased to 10,002 including 5,746 seats, and to coincide with the reopening of the facilities, the name was officially change from Stade de Armoricaine to Stade Francis-Le Blé as per the first paragraph.

On 8th August 1986  a record crowd of 21,619 came to a pre-season friendly against one of France’s most popular club’s Olympique de Marseille. This record is unlikely to ever be beaten as even after €6 million euros worth of renovations in the Summer of 2010 only an additional 5,000 seats were made available, resulting in the current capacity of 15,305.

As for the future of Stade Francis-Le Blé there has been speculation as far back as 2004 that Brest could construct a brand new state-of-the-art stadium within Les Portes de Brest-Guipavas. As official plans have failed to materialise in what has been over a decade now, the likelihood of this happening is all but nothing.

Below is a seating plan of Brest's Stade Francis-Le Blé: 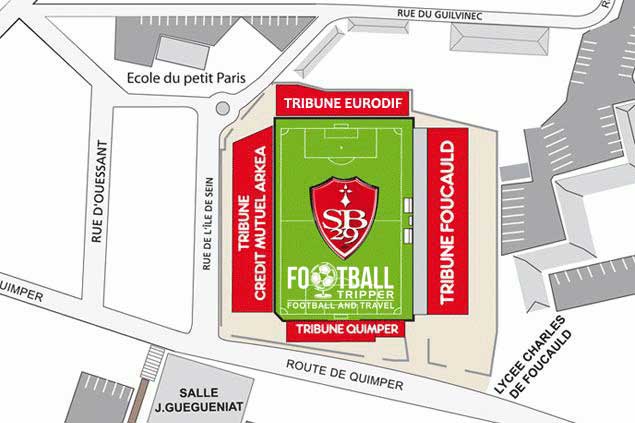