Stade de l’Aube is a multi-purpose sports venue located in the north-eastern commune of Troyes, which belongs to the Aube Department.

First built in 1956, the home ground of Troyes AC achieved its current capacity of 20,400 after undergoing renovation in 2004.

Stade de l’Aube first opened in 1956 however the site’s usage for football matches dates back anywhere between 20-30 years depending on which historians you believe.

The current 20,000 plus capacity stadium as we know it largely arrived after renovation work which occurred over a six year period between 1999 and 2004.

To date the record attendance of Stade de l’Aube is 20,347 which was achieved during a second division match between Troyes and Amiens SC on 18th May 2012.

An end of season fixture, fans flocked to the stadium to celebrate Troye’s promotion back to Ligue 1 as they secured a third place finish behind Reims and Bastia.

The highest level of football played Troyes Stadium has arguably been qualification matches of the UEFA Cup in the 2000/2001 season. After defeating MFK Ruzomberok, the club faced Leeds United but narrowly lost 6-5 on aggregate.

Participation came on the back of winning the Intertoto Cup by defeating Newcastle United in the final after defeating Wolfsburg and AIK en-route.

Thought to make the playing surface more durable, maintaining a high quality pitch can often be expensive, and thus this has been seen as a financially prudent move.

Below is a seating plan of Troyes's Stade de l’Aube: 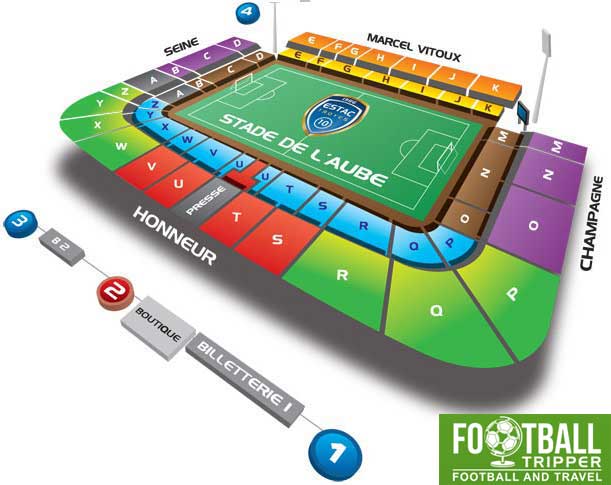 How to get to Stade de l’Aube

Where is Stade de l’Aube?

Who plays at Stade de l’Aube?

What is the capacity of Stade de l’Aube?

As of 2022 Stade de l’Aube has an official seating capacity of 20,400 for Football matches.

When was Stade de l’Aube opened?

What is the postcode for Stade de l’Aube?

Covid Restrictions may be in place when you visit Stade de l’Aube in 2022. Please visit the official website of Troyes for full information on changes due to the Coronavirus.