Stade Pierre-Mauroy located in Hôtel de Ville quarter of Villeneuve d’Ascq France is the home stadium of Ligue 1 side LOSC Lille Métropole. The ground which opened in 2012 at cost of €282 million (Plus facilities) is the newest stadium in France, and is large enough to accommodate just over 50,000 fans.

Lille’s original home until 2004 was Stade Grimonprez-Jooris until they moved away to Stade Lille-Métropole with a view to redevelop their dated facilities. When plans failed to come to fruition, the club’s management assessed the economic viability of building a new stadium in 2008, and in 2010 construction of the €300 million, multi-purpose stadium began.

Officially opened with an inaugural Ligue 1 match between Lille and Nancy on the 17th August 2012 (1-1), the stadium was originally going to be known as Grand Stade Lille Metropole. Following the death of former mayor of Lille and Prime Minister of France, Pierre Mauroy (1928-2013)  however the name of the stadium was somewhat controversially changed in his honour.

Built as an ultra-modern sports facility, the Stade Pierre Mauroy is architecturally impressive, with a unique transformer design allowing for 5 different configurations including rugby, basketball, concerts and of course football.

With such cutting-edge features, it’s no surprise that Pierre Mauroy has been selected as one of the football stadiums for the 2016 Euro Championships, and surely it heralds the future of all sporting facilities.

Below is a seating plan of Lille's Stade Pierre-Mauroy: 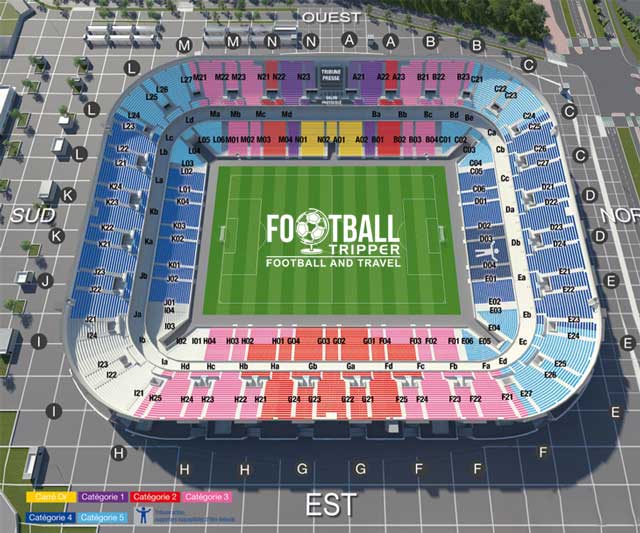 Pierre-Mauroy can be divided into four sections: Nord, Est, Sud and Ouest.

Away fans are housed within the south-east corner between the Sud goal-end and the Est-tribune. As one should expect from a newly constructed Stadium, the arena is an intimate yet deceptively large with comfortable seats, good acoustics and flawless views throughout.

The local area is known for the large number of breweries with “beer” deeply ingrained within the culture of Lille. Popular local brands include Pelforth, Pelican, Excelsior and Coq Hardi.

Lille also has a strong culture of gin, with the spirit being one of the most widely consumed alcoholic drinks in the city. Nearby within Loos and Wambrechies there are two distilleries.

Within the immediate vicinity of Stade Pierre Mauroy there are a handful of choices including Subway and the popular Soho Urban Food chain.

Across the road you have the V2 Centre Shopping Centre which greatly increases the number of fast food outlets on offer with McDonalds, Pizza del Arte and Salad & Co three such examples.

LOSC Lille operate two stores throughout the city in addition to their official online boutique. The largest range of LOSC products gathered in one place across 300m² of space within the Western stand of the stadium.

Fans of Lille football club can undertake a 1 hour guided tour of the Stade Pierre Mauroy either as an individual or as part of a larger group.

To book a tour, find out availability and for full information please visit the official site of Stade Pierre Mauroy.

How to buy Lille Tickets

Tickets to see Lille play football can be purchased via the usual French channels including Online, Phone +33 (0) 892 68 56 72 or in person at both the ticket office and Lille Stores at the stadium.

Whilst you can purchase tickets on the day of the match, it can be advisable to book in advance to secure the best possible seats in the stadium. Lille generally have attendances ranging between 30-40,000.

Price wise, expect to pay around €16.00 for a seat within one of the upper tiers behind the goal and anywhere up to €90.00 for a premium seat located on the half way line, within the main grandstand.

How to get to Stade Pierre-Mauroy

Where is Stade Pierre-Mauroy?

Stade Pierre Mauroy is located 6km or so, South-East of the city centre within the Lillian suburb of Villeneuve d’Ascq.

We don;t currently have any information about parking, sorry.

Located near to the border of Belgium, Lille lies on an important crossroads of the European high-speed rail network and as a result is approximately 1.20 minutes from London, 1.35 from Paris and only 35 minutes from Brussels making it one of the most accessible footballing cities in Europe.

To travel to Pierre Mauroy on matchdays, you can either use Line 1 and get off at either Cite Scientifique and 4 Cantons, or Line 2 which has the Meadows stop plus a free shuttle bus to the stadium.

On matchdays both lines run at increased frequency up to 2 hours before and after the game, ensuring that your journey isn’t too congested which is always nice.

Lille is served by Aéroport de Lille (Lille-Lesquin International airport) which is located approximately 15 minutes away from the city centre by car (11km).

Lille-Lesquin Airport is probably the largest flight hub in the  Nord-Pas de Calais region and the airport handles over 1.3 million passengers per year.

There are 4/5 hotels within the little island created by the surrounding motorways with Park Inn by Radisson Lille Grand Stade probably being the pick of the bunch.

Heading back towards the Centre-Ville, Holiday Inn Express Lille Centre is a decent central choice, with Hotel Flandre Angleterre and Hotel Lille Europe being two decent choices if you want to be close to the train stations.

Who plays at Stade Pierre-Mauroy?

French side Lille play their home matches at Stade Pierre-Mauroy.

What is the capacity of Stade Pierre-Mauroy?

As of 2022 Stade Pierre-Mauroy has an official seating capacity of 50,186 for Football matches.

When was Stade Pierre-Mauroy opened?

What is the postcode for Stade Pierre-Mauroy?

The postcode for Stade Pierre-Mauroy is 59650.

Covid Restrictions may be in place when you visit Stade Pierre-Mauroy in 2022. Please visit the official website of Lille for full information on changes due to the Coronavirus.