Construction began on Nouveau Stade de Bordeaux in 2013 and it is expected to be ready in April 2015, with the first match set to occur between Girondins de Bordeaux and FC Nantes on the 29th May. I

t is currently known as Matmut Atlantique for sponsorship reasons.

The decision whether or not to replace the 1938 built Stade Chaban-Delmas was one that has lingered since France were awarded the World Cup in 1998.

At the time, the decision was made to simply renovate the facilities and to increase the capacity to 34,694 but as the stadium is classified as a historic building, its restoration proved difficult with some stands remaining uncovered due to the challenges posed by the old cycling track.

Less than 20 years later France are due to host Euro 2016 and after the French Football association weren’t going to include the city of Bordeaux in the bid due to the ageing nature of Jacques Chaban Delmas , the local council opted to build a brand new state of the art stadium north of the city on the left bank of the river Garonne.

Designed by Swiss architects Jacques Herzog and Pierre de Meuron who famously designed Munich’s Allianz Arena and The Olympic Stadium in Beijing known as the “birds nest”, Stade Bordeaux-Atlantique as it has been dubbed will boast just over 40,000 seats.

It is set to be funded by a mixture of public and private enterprise with the the French Government funding the lion’s share of the deal, as they are willing to contribute €28 million euros.

The unique design consists of more than 1,000 white columns which is set to represent the Landes Forest which is a famous piece of nature within the Gironde region.

Construction began on April 15th 2013 and will be complete two years later on April 30th 2015, with the final game of the 2015 season set to be played against Montpellier HSC in what will surely be a historic occasion.

Below is a seating plan of Bordeaux's Matmut Atlantique: 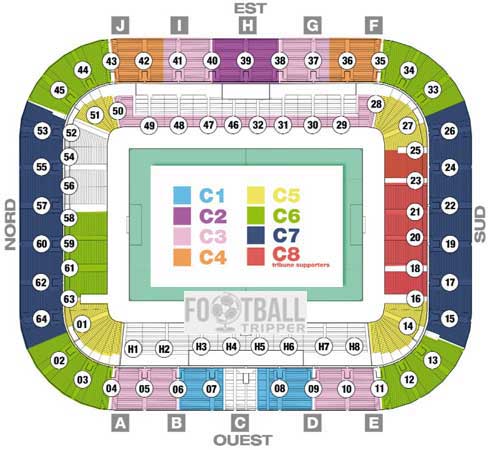 According to the stadium plan away fans are housed within the eastern side of the northern goal-end. Depending on how many travelling supporters there are expected to be Bordeaux can allocate up to three blocks of seating: 52, 54, and 56.

You can get a beer at the stadium but there are also plenty of pubs and places to drink wine within Bordeaux.

FC Bordeaux operate three boutiques around the city, however they’ve yet to formally announce one at their new stadium. To see a full list of the stores, and to check out the official online store, check out this page.

It doesn’t appear as if FC Bordeaux or the local council currently offer tours of Nouveau Stade de Bordeaux as it has only just opened. We’d be very surprised if this doesn’t change in the future however, particularly after Euro 2016.

How to buy Bordeaux Tickets

Tickets to see Girondins Bordeaux in action at their new ground can either be purchased online or in person at the stadium’s ticket office.

Ticket prices will become clearer after a few matches have been played of the 2016 season.

How to get to Matmut Atlantique

Where is Matmut Atlantique?

Le Nouveau Stade Bordeaux is situated within Le-Lac neighborhood  which sits on the left bank of the River Garonne approximately 7.7 km north of the city centre.

There are 8,500 free parking spaces at the ground, now that’s stadium planning!

The main railway station of the city is Gare de Bordeaux-Saint-Jean  and although it’s quite far from the stadium, it does have its own tram stop which is connected to Nouveau Stade Bordeaux (See below for more details).

Bordeaux-Merignac Airport is located 15.7km south-west of Nouveau Stade Bordeaux or 12km from the city centre. There are numerous flight carriers who operate out of here including easyJet, Hop! and Ryanair with a Jet’Bus shuttle service taking you to and from Saint-Jean railway station.

There aren’t really any accommodation options within Le Lac neighborhood, so instead look for something back towards the centre of town. Hotel Continental and Hotel Gambetta are both reasonably priced, with Acquitain and Hotel Du Faisan cheap and close to Gare Saint-Jean train station.

Who plays at Matmut Atlantique?

French side Bordeaux play their home matches at Matmut Atlantique.

What is the capacity of Matmut Atlantique?

As of 2022 Matmut Atlantique has an official seating capacity of 42,115 for Football matches.

When was Matmut Atlantique opened?

Matmut Atlantique officially opened in 2015 and is home to Bordeaux

What is the postcode for Matmut Atlantique?

The postcode for Matmut Atlantique is 33300.

Covid Restrictions may be in place when you visit Matmut Atlantique in 2022. Please visit the official website of Bordeaux for full information on changes due to the Coronavirus.