The Allianz Riviera is a nice stadium located in nice, home of Ligue 1 football side, OGC Nice.

The ground built in 2011-2013 has a capacity of 35,624 and replaces the city’s former stadium Stade Municipal du Ray which was much smaller with room for just under 19,000 fans.

Between the years of 1927 and 2013 Nice played their home matches at the 18,696 capacity Stade Municpal du Ray which was popular for it’s location in the city centre but ultimately suffered due to it’s small capacity and lack of potential for growth, with a renovation project in 1997 not enough to save the future of Stade du Ray.

Consequently in 2002, the club began to formulate plans to relocate to a new home but with local politicians questioning the viability of the stadium, work was set to begin four years later in July 2006 but was once again delayed due to allegations of price fixing ticket prices directed at those involved with the project.

Fortunately, the new Deputy Mayor of Nice, Christian Estrosi mediated and helped push through construction of the stadium by 2011, still at the same Nice-Lingostière location.

Once Grand Stade de Nice was chosen to be included as part of the Euro 2016 bid, there weren’t ever any doubts that the project wouldn’t be completed on time with  construction completed on September 2013, just in time for the new football season in France.

The inaugural league match was held between Nice and Valenciennes with the home side kicking things off in style winning 4 nil.

After the €245 million state-of-the-art stadium was complete, it was dubbed “Olympic Nice Stadium”, at least until German insurance company Allianz acquired the naming rights for the next 9 years at a cost of 1.8 million euros per year and decided to name Allianz Riviera, which actually sounds quite nice, nicer than The Allianz Arena.

Below is a seating plan of Nice's Allianz Riviera: 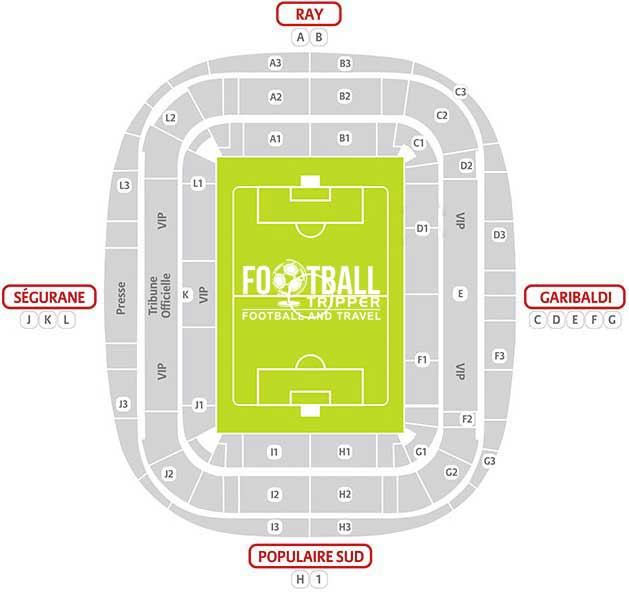 Away fans are housed within the north-east corner of the stadium which is fenced off by two sections of perspex panels. Visitors to the stadium are in for a fantastic football experience as the Allianz Arena offers flawless views throughout regardless of where you are sat.

Located out of town unfortunately there aren’t too many pubs within the immediate vicinity of the stadium however the beautiful city centre of Nice is brimming with boozers waiting to be discovered.

The map below outlines some of the most football friendly ones.

The Allianz Riviera is part of a wider commercial complex, with a nearby shopping centre owned by Vinci Immobilier offering fans a way to kill time before the match, in addition to the arena which has several (22?) dining options within it’s vicinity.

OGC Nice appear to operate a single store on their website in addition to this dedicated Online boutique.

At the moment there are no stadium tours for Allianz Riviera but the management behind the stadium are planning on implementing them at some point in late 2015.

For now an alternative is Museum of National Sports, which whilst isn’t strictly a football or Nice related set of memorabilia, may be of interest to some sports fans. The Musee National Du Sport opened it’s doors on July 5th 2014 and for more information you can email [email protected]

How to buy Nice Tickets

Tickets to see Olympique Gymnaste Club Nice can either be purchased online or in person at either the Allianz or at various ticket vendors such as Francebillet and Ticketnet throughout Nice.

Prices start at a generous €10.00 for something behind the goal and an average of €50.00 for a central location in the main stand. Y

ou should know by now that prices increase for high profile matches such as during the Derby de la Côte d’Azur against AS Monaco.

How to get to Allianz Riviera

Where is Allianz Riviera?

Allianz Stadium is conveniently located just off of a large motorway and series of dual carriageways which means that it is highly accessible by car.  Exit 52 on the A8 motorway will take you to the stadium.

Some fans recommend exiting off at 51 for less restricted parking spaces, however according to the official website the stadium boasts over 11,000 spaces which fans can use on matchdays for a few euros.

The main train station of the city Gare de Nice-Ville offers a range of national and local routes which can take you to the stadium on matchday.

You can either catch the train to Saint-Augustin station and then a shuttle bus to the Allianz Riviera Stade or the commuter train to Saint-Isodore station where it is a 10 minute walk to the ground.

Nice Côte d’Azur Airport lies 5km South of the Allianz on the Mediterranean coast, and approximately 7km West of the historic city centre.

Serving over 10.5 million passengers a year Nice Côte d’Azur is the fourth busiest airport in France with plans underway to expand outwards to sea through land reclamation which will allow the addition of additional runways.

Once you have landed you can get to the city centre by taking either the 98 or 98 shuttle bus service which costs €6 and will take you to the central train station.

The two closest hotels to Stade Allianz Riviera and accessible by foot are the pricey Servotel Nice (£120+) and the more affordable Kyriad Hotel (£50).

If you have a car and have an early flight to catch the next day you could always head back to the airport where there are numerous options such as Radisson Blu and Hotel Ibis.

Going back towards Nice City centre there are way too many hotels to list, with it advisable from me that you work out what you want to be near to and then take a look at Google maps.

Who plays at Allianz Riviera?

French side Nice play their home matches at Allianz Riviera.

What is the capacity of Allianz Riviera?

As of 2023 Allianz Riviera has an official seating capacity of 35,624 for Football matches.

When was Allianz Riviera opened?

Allianz Riviera officially opened in 2013 and is home to Nice

What is the postcode for Allianz Riviera?

The postcode for Allianz Riviera is 06200.

Covid Restrictions may be in place when you visit Allianz Riviera in 2023. Please visit the official website of Nice for full information on changes due to the Coronavirus.