The Allianz Parque is a newly built stadium in the Brazilian city of São Paulo. The 43,600 capacity arena is home to Sociedade Esportiva Palmeiras who are one of the most popular teams in the country with an estimated 17 million supporters.

Allianz Parque was completed in the Summer of 2014 with the inaugural Brasileiro Série A match held on the 19th November 2014 between Palmeiras and Sport Recife with the home side christening their new ground with a 2 nil win. Constructed over a period of four years starting back in 2010, the stadium cost an estimated R$630 million and opened with a capacity of 43,600.

Constructed by WTorre Properties/Arenas Group and operated by Anschutz Entertainment Group (AEG), the stadium is built on the same site as the old Estádio Palestra Itália, with many fans continuing to refer to the ground by this name, albeit in a slightly modified form, “Palestra Italia Arena”.

Before construction of the stadium was complete it was announced that German Insurance Company Allianz purchased the naming rights of the stadium for a period of 20 years at a cost of R$300 million. Giving fans the chance to vote on the name, Allianz Parque won 89% of all votes, with the new stadium joining the likes of Allianz Arena in Munich, Allianz Stadium in Sydney and Allianz Riviera in Nice.

With the stadium meeting FIFA’s minimum requirement of 40,000 seats many expected the Allianz Parque to be one of the host stadiums of the 2014 World Cup in Brazil but this wasn’t the case. Besides not being completed in time for the tournament, the city of São Paulo was represented by the larger Arena Corinthians which had its capacity temporarily increased to 65,000.

Below is a seating plan of Palmeiras's Allianz Parque (São Paulo): 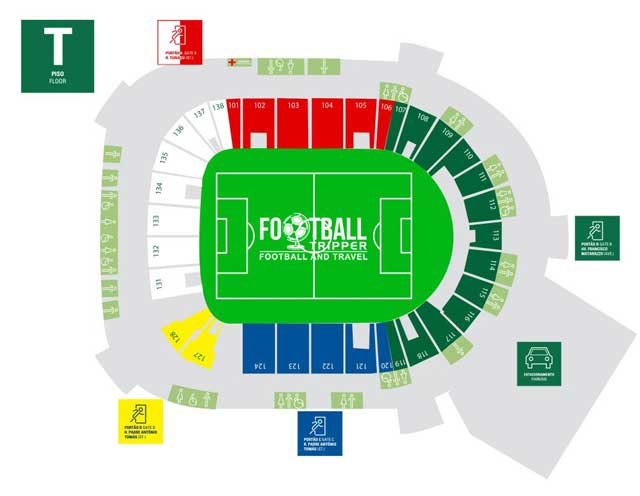 The Allianz Parque is comprised of four stands: North, East, South and West.

How to get to Allianz Parque (São Paulo)

Where is Allianz Parque (São Paulo)?

What is the capacity of Allianz Parque (São Paulo)?

As of 2023 Allianz Parque (São Paulo) has an official seating capacity of 43,600 for Football matches.

Covid Restrictions may be in place when you visit Allianz Parque (São Paulo) in 2023. Please visit the official website of Palmeiras for full information on changes due to the Coronavirus.