Itaipava Arena Fonte Nova sometimes referred to as Complexo Esportivo Cultural Professor Octávio Mangabeira is a purpose built football stadium located in Salvador, in the state of Bahia. Built for the 2014 World Cup, and the curtain raising 2013 Fifa Confederations cup, the 55,000 capacity stadium is now used by local side Esporte Clube Bahia.

Itaipava Arena Fonte Nova was purpose built for the 2014 World Cup, with the brand new 55,000 capacity stadium constructed on the site of the former Estádio Fonte Nova. Designed by the German architects Schulitz & Partner who were responsible for redesigning Hannover’s Niedersachsenstadion for the 2006 World Cup, the new stadium will be used by Esporte Clube Bahia before and after the tournament.

The inaugural fixture held on 7th April 2013 was a Campeonato Baiano match between Vitória and Bahia who defeated the new tenants 5-1 in far from ideal circumstances. The state of the art stadium cost just under an estimated $280 million to build, with some of the costs offset by local brewery Itaipava purchasing the naming rights for 10 year deals at a cost of $100 million.

Initially fans were impressed the appearance and design of the stadium but some concerns were raised during the opening fixture when there appeared to be an excessive amount of dust floating around the ground. A few months later on 27th May a small section of the roof collapsed after a period of heavy rain casting into doubt the stadium’s safety although public fears were allayed when an independent safety inspection deemed the ground safe.

Hosting three matches of the 2013 Confederations Cup in preparation for next years main event, Itaipava Arena Fonte Nova, did so without a hitch and went on to successfully host twice as much matches in the World Cup. The new stadium hosted four group matches and two knock-out matches including a round of 16 between Belgium and a resilient United States plus the Netherlands against surprise package Costa Rica in the quarter finals.

Below is a seating plan of Bahia's Itaipava Arena Fonte Nova: 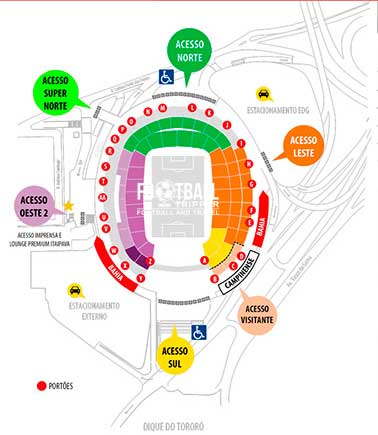 How to get to Itaipava Arena Fonte Nova

Where is Itaipava Arena Fonte Nova?

What is the capacity of Itaipava Arena Fonte Nova?

As of 2022 Itaipava Arena Fonte Nova has an official seating capacity of 51,900 for Football matches.

Covid Restrictions may be in place when you visit Itaipava Arena Fonte Nova in 2022. Please visit the official website of Bahia for full information on changes due to the Coronavirus.