Estádio do Morumbi technically known as Estádio Cícero Pompeu de Toledo is the home stadium of popular Brazilian side São Paulo FC. Located in Morumbi district of the largest city in the country, the ground has a capacity of 67,052 which makes it the 4th largest in Brazil.

Estádio do Morumbi first opened on 2nd October 1960 and at the time of opening was the world’s largest private stadium with São Paulo Futebol Clube making an unprecedented move in constructing their own ground. Designed by architect João Batista Vilanova Artigas, the popular name of the ground is derived from the Morumbi neighbourhood it resides within.

The inaugural match was played against Sporting Clube de Portugal 8 years after construction had began on the 15th august 1952, with the partially finished stadium opening with a capacity of 70,000. A decade later Estádio do Morumbi was finally declared finished with the capacity doubling to a remarkable 140,000 with a second inaugural match held this time against different Portuguese giants, FC Porto.

In 1977 the stadium’s record attendance was set when 138,032 spectators crammed into The Morumbi to witness Ponte Preta deafeat São Paulo’s rivals, the Corinthians 2-1, with the match noted for being played without any off the field safety incidents. Regardless, renovations beginning in 1994 saw a conversion to all-seating and thus the capacity was reduced to 80,000.

As the third largest football stadium in Brazil many considered Estádio do Morumbi as a natural choice to host matches of the 2014 World Cup including the opening ceremony however Arena Corinthians was instead put forward as São Paulo’s representative stadium. Reportedly there was a failure to provide financial guarantees for the renovation work, although $435 million was counter-intuitively raised to construct the new stadium.

Below is a seating plan of São Paulo's Estádio do Morumbi: 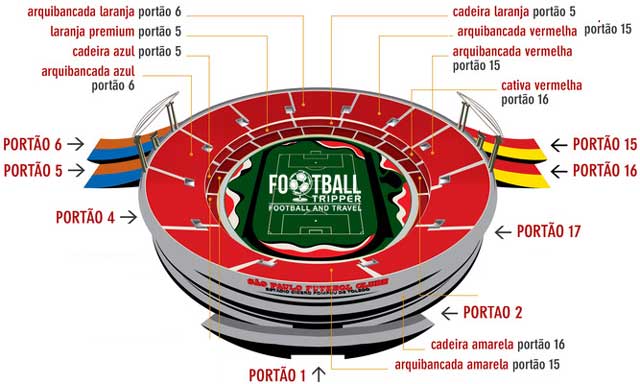 Estádio do Morumbi is comprised of four stands: North, East, South and West.

How to get to Estádio do Morumbi

Where is Estádio do Morumbi?

Who plays at Estádio do Morumbi?

Brazilian side São Paulo play their home matches at Estádio do Morumbi.

What is the capacity of Estádio do Morumbi?

As of 2022 Estádio do Morumbi has an official seating capacity of 67,052 for Football matches.

When was Estádio do Morumbi opened?

Covid Restrictions may be in place when you visit Estádio do Morumbi in 2022. Please visit the official website of São Paulo for full information on changes due to the Coronavirus.