Estádio Governador Magalhães Pinto commonly known as Estádio Mineirão is the largest football stadium in the city of Belo Horizonte and is 5th biggest stadium in the country. Fans from around the world will recognise the iconic circular stadium from the 2013 Confederations Cup and more recently the 2014 World Cup.

Estádio Mineirão first opened on the 5th September 1965 with the inaugural fixture held between the Minas Gerais state team and famous Argentinian team, River Plate. Building work on the stadium began in 1959 but the planning which went into the project pre-dated this by around 25 years with many stakeholders across Belo Horizonte coming together to plot its construction.

At the time the three largest teams in the city (América Mineiro, Atlético and Cruzeiro) had their own stadiums but they were outdated, uncomfortable and above all else, too small to support the growing fan base with no ground exceeding a capacity of 10,000. When Brazil hosted the 1950 World Cup many saw this as the ideal catalyst to address the growing stadium problem, but alas the solution fell short of expectations.

Estádio Independência was constructed and finished at the very last minute just in time for the match between Yugoslavia and Switzerland group match, but the excitement of the 30,000 stadium soon diminished when fans realised that the ground was uncomfortable and once again too small. With Estádio Mineirão the public and private sectors vowed to get it right this time, and thus one of the most popular stadiums in Brazil was born.

The record attendance was set in 1997 in the final game of the season between Cruzeiro and Villa Nova when 132,834 spectators made their way to the stadium after a promotional offer which allowed women and children to enter for free. Nearly 40 years after first opening the stadium’s capacity was reduced to 72,000 after FIFA updated their stadium safety legalisation.

Named after state Governor Magalhães Pinto who was instrumental in driving the project through into existence, Estádio Mineirão hosted 6 matches of the 2014 World Cup including Brazil’s infamous 7-1 implosion against Germany in the semi-finals.

Below is a seating plan of Cruzeiro's Estádio Mineirão: 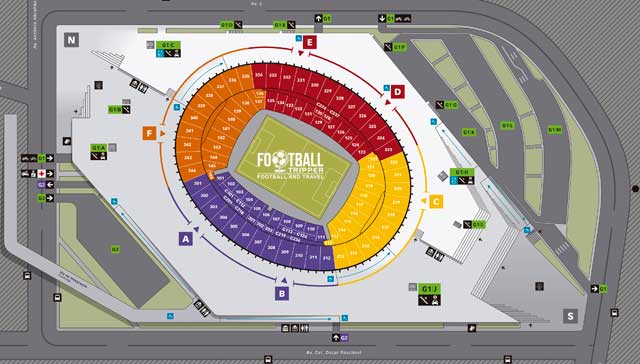 How to get to Estádio Mineirão

Where is Estádio Mineirão?

Who plays at Estádio Mineirão?

Brazilian side Cruzeiro play their home matches at Estádio Mineirão.

What is the capacity of Estádio Mineirão?

As of 2023 Estádio Mineirão has an official seating capacity of 58,170 for Football matches.

When was Estádio Mineirão opened?

Estádio Mineirão officially opened in 1965 and is home to Cruzeiro

What is the postcode for Estádio Mineirão?

Covid Restrictions may be in place when you visit Estádio Mineirão in 2023. Please visit the official website of Cruzeiro for full information on changes due to the Coronavirus.