El Monumental, officially known as Estadio Antonio Vespucio Liberti is the legendary football stadium located in the city of Buenos Aires, Argentina. Home to world renowned team, Club Atlético River Plate, the 61,321 capacity ground is the largest stadium in Argentina and is regarded as the official stadium of the national team.

Estadio Antonio Vespucio Liberti first opened on Wednesday 25th May when a crowd of around 65,000 entered the stadium to witness the opening ceremony which involved the raising of flags and singing of both the national anthem and River Plate Chants. The next day the inaugural match was held against Uruguay team Peñarol with an even larger crowd of 68,000 witnessing the home side’s 3-1 maiden victory.

El Monumental took just over two years to complete with River Plate purchasing a plot of land within the Belgrano neighbourhood on October 31st 1934. Famous for being constructed on reclaimed land from the marshland of Río de la Plata, the project was delayed when the initial budget of $2.5 million was exceeded which resulted in the  opening of an incomplete U-shaped stadium for the first iteration.

It wasn’t until 1958, almost twenty years after opening, that the final section of the stadium was to be filled in, with the capacity of Estadio Vespucio Liberti greatly rising to an impressive 90,000 upon completion of the work. River Plate were only able to finance the renovation work after selling their star player, Omar Sivori, to Juventus for over £10 million pesos – otherwise it would not have been possible.

The stadium was remodelled for the 1978 World Cup where it hosted over 9 matches if the tournament including the opening match between Germany and Poland, and the final between Argentina and Netherlands. With the exception of a decrease in capacity due to improved safety legislation, Estadio El Monumental has changed very little since this competition, with the ground continuing to be a fortress for La Albiceleste.

Below is a seating plan of River Plate's El Monumental: 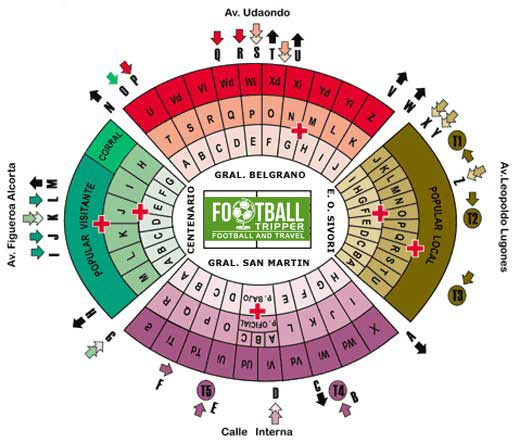 Stadium tours of Estadio Monumental are available every day of the week between 11.00 am to 5.00 pm, and are available as part of entrance to the museum which is open from 10.30 am to 6.00 pm.

For more information feel free to phone the museum on (54 11) 4789-1156 or visit the official Museo River website for more information. Note 1 Argentine Peso is currently equal to 0.074 pence which means the tour will cost £8.10.

How to get to El Monumental

Where is El Monumental?

Although there are many train stations throughout the greater metropolitan area, the main one is often considered to be Retiro Station. It is the main terminus for three of Argentina’s busiest railway lines: Mitre, Belgrano and San Martin.

Who plays at El Monumental?

What is the capacity of El Monumental?

As of 2022 El Monumental has an official seating capacity of 67,432 for Football matches.

When was El Monumental opened?

Covid Restrictions may be in place when you visit El Monumental in 2022. Please visit the official website of River Plate for full information on changes due to the Coronavirus.