Boca Juniors’ iconic stadium first opened on May 25th 1940 after a construction period of two years with a friendly match held against Buenos Aires based rivals San Lorenzo. Originally known as Estadio Boca Juniors, the ground initially consisted of just two tiers with the club deciding to expand the stadium less than a decade later in 1949 after the popularity of football began to spread throughout Argentina.

The expansion involved the addition of a third tier of seating within the main stand and it was upon completion of this new seating area in 1953 that led to the stadium’s famous nickname – La Bombonera. Literally meaning “Chocolate Box”, the exterior of the ground is said to resemble a confectionery tin with a large “flat” main stand and then a uniform bowl consisting of steep sections of seating.

Officially the stadium’s name was changed in 1986 to “Estadio Camilo Cichero” in honour of the president who reigned over La Bombonera’s construction, although since the millennium it is known as “Estadio Alberto Armando”. Famous for leading the club to one of its most successful periods, Alberto Armando presided over Boca Juniors across two spells: 1954 – 1955 and 1960 – 1980.

The last major renovation occurred in 1996 when a fourth tier was added to the main stand as well as the stadium’s exterior receiving an iconic coat of yellow and blue paint. For the annual Superclásico derby against River Plate, La Bombonera is almost always guaranteed to sell out its 49,000 capacity, with Boca Juniors flirting with the idea of expansion for at least a decade now.

Below is a seating plan of Boca Juniors's La Bombonera: 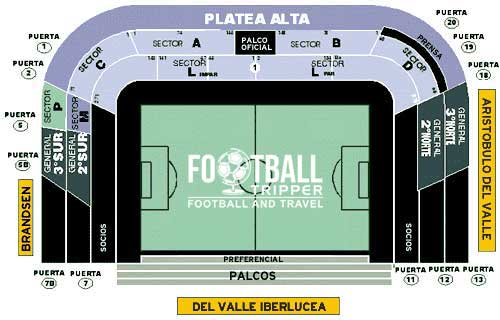 How to buy Boca Juniors Tickets

It appears as if Boca Juniors stopped directly selling tickets to the general public a few years ago, and tickets sales are now handed through third party agencies for non-members.

How to get to La Bombonera

Where is La Bombonera?

La Bombonera is located approximately 4.5km from downtown Buenos Aires in La Boca District which makes it one of the most accessible football stadiums from the city centre.

It’s not recommended that you drive as there is lots of congestion and a real lack of on-site parking.

Although there are many train stations throughout the greater metropolitan area, the main one is often considered to be Retiro Station. It is the main terminus for three of Argentina’s busiest railway lines: Mitre, Belgrano and San Martin.

Who plays at La Bombonera?

What is the capacity of La Bombonera?

As of 2023 La Bombonera has an official seating capacity of 48,000 for Football matches.

When was La Bombonera opened?

What is the postcode for La Bombonera?

The postcode for La Bombonera is C1161 CABA.

Covid Restrictions may be in place when you visit La Bombonera in 2023. Please visit the official website of Boca Juniors for full information on changes due to the Coronavirus.