Estadio Ciudad de La Plata or Estadio Único as it is popular known as is a multi-purpose sports arena located in the Argentinian city of La Plata. Built through a combination of private and public enterpises, the 53,000 capacity stadium first opened in June 7th 2003, and is currently the home ground of Club Estudiantes de La Plata and occasionally Club de Gimnasia y Esgrima La Plata.

Estadio Ciudad de La Plata first opened on 7th June 2003 with the inaugural match held a week later between Villa San Carlos and Atlético Acassuso, in a match to help determine promotion to the Argentinian Second Division. A more glamorous tie was held shortly after between Argentina and Uruguay on 16th July, with 40,000 fans enjoying a well-contested 2-2 draw.

Regarded as one of the most modern stadiums in South America until Brazil hosted the 2014 World Cup, Estadio Ciudad de La Plata’s genesis actually dates as far back as 1947 when Governor Domingo Mercante created La Plata Sports Complex. The local municipality had long wanted a modern football stadium for the city of La Plata but struggled to obtain the necessary funding until the 1990s.

Previously La Plata was nominated as a potential host city for the 1978 World Cup but was not selected in the final five. This could have potentially acted as the catalyst to the stadium’s construction but it wasn’t until the formal establishment of a committee between Buenos Aires Province Government, the Municipality of La Plata’s and the two local football clubs in 1989 that the wheels were set in motion.

Planning permission was obtained in 1996, and two years later the Mayor of La Plata, Julio Alak laid the first ceremonial stone at the construction site of the stadium. Slightly delayed by minor disputes with the trade union, building work took place over the course of three years, with Ciudad de La Plata warmly received by the general public.

In 2011 the stadium temporarily closed at the start of the year as it was converted to all-seating, with the ground reopening on February 17th 2011.

Below is a seating plan of Estudiantes (LP)'s Estadio Ciudad de La Plata: 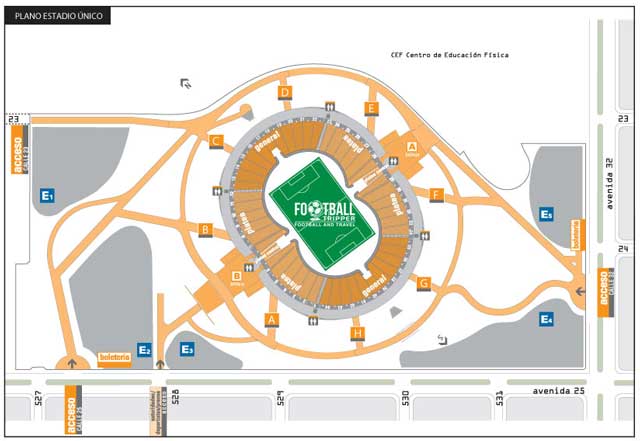 How to get to Estadio Ciudad de La Plata

What is the capacity of Estadio Ciudad de La Plata?

As of 2022 Estadio Ciudad de La Plata has an official seating capacity of 53,000 for Football matches.

Covid Restrictions may be in place when you visit Estadio Ciudad de La Plata in 2022. Please visit the official website of Estudiantes (LP) for full information on changes due to the Coronavirus.