Arena da Baixada, technically known as Estádio Joaquim Américo Guimarães is a 39,631 capacity football stadium located in the city of Curitiba in Paraná state. Home of local side Clube Atlético Paranaense, the new Arena da Baixada was built for the 2014 World Cup, and it hosted four group matches including a match of defending World Cup Champions, Spain.

Arena da Baixada is a purpose built football stadium which first opened on the 24th June 1999 although the site on which the Arena stands has previously been used for sports since as early as 1914. Formally known as Estádio Joaquim Américo Guimarães, the stadium’s usage throughout the century has been inconsistent with the ground closing down in the 1970s only to be reopened  in the 1980s.

It was then completely rebuilt in the 1990s with the inaugural match of the new stadium held between Atlético Paranaense and Paraguayan side Cerro Porteño with the home side winning by a two goals to nil. The record attendance to date for a club match was set on December 16th 2001 when 31,740 supporters saw the home side defeat São Caetano 4-2 in the first game of the Brazilian Championship finals.

The stadium was briefly known as the Kyocera Arena between 2005 and 2008 when the Japanese Electronic Company purchased the naming on a three year deal but has since reverted back to the “da Baixada” name. A few years later Atlético Paranaense’s underwent renovations to increase the capacity to 40,000 in anticipation of four group matches of the 2014 World Cup.

The construction work was married in controversy with Newspaper reports of numerous health and safety breaches although fortunately no workers died unlike in other grounds such as Sao Paulo stadium. The work was delayed as a result of the incidents and subsequently the retractable roof was not installed in time with the plans now cancelled.

Below is a seating plan of Atlético Paranaense's Arena da Baixada: 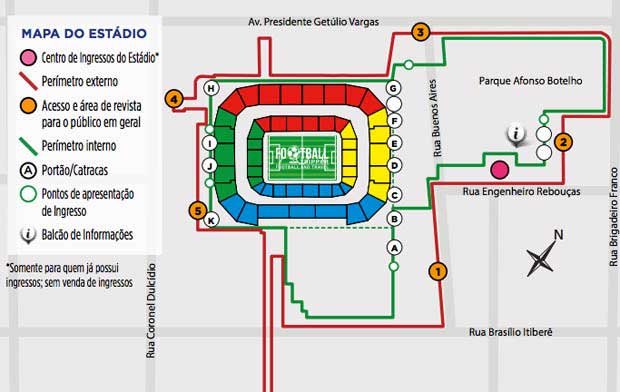 How to get to Arena da Baixada

Where is Arena da Baixada?

Who plays at Arena da Baixada?

What is the capacity of Arena da Baixada?

As of 2023 Arena da Baixada has an official seating capacity of 39,631 for Football matches.

When was Arena da Baixada opened?

Covid Restrictions may be in place when you visit Arena da Baixada in 2023. Please visit the official website of Atlético Paranaense for full information on changes due to the Coronavirus.