Estádio Raimundo Sampaio more popularly known as Estádio Independência is a football ground located in the Belo Horizonte neighbourhood of Brazilian city Minas Gerais. Built for the 1950 World Cup, and renovated in 2010 for home side Clube Atlético Mineiro, it was not included as part of Brazil’s 2014 World Cup bid much to the surprise of fans.

Estádio Raimundo Sampaio was constructed with an initial capacity of 30,000 for the Brazilian hosted 1950 World Cup, where it would go on to host three group matches including a memorable eight nil rout of Bolivia by tournament Champions, Uruguay. The stadium is commonly known as Estádio Independência after the first owners Sete de Setembro FC, with the 7th September representing the country’s day of Independence.

After Sete de Setembro dissolved, ownership of the ground was transferred to the Minas Gerais government with Atlético Mineiro and América Futebol Clube becoming permanent residents of the stadium after signing a long term lease in 1989. Both clubs collaborated on the expansion of Estádio Independência to a capacity of 30,000 in 1999 but this was short lived after the extension was deemed unsafe.

In 2010 the entirety of Independência was demolished and rebuilt with the exception of the changing rooms, with the new stadium consisting of three large multi-tiered stands. Costing an estimated $125 million, the project was delayed by a year and eventually reopened on 25th April 2012 to generally good reviews although some seats were criticised for their restricted views.

With the stadium having a World Cup pedigree many expected Estádio Raimundo Sampaio to be involved in the 2014 World Cup but this wasn’t to be as the stadium failed to satisfy FIFA’s minimum requirement of 40,000 seats.The city of Belo Horizonte instead opted to renovate Estádio Mineirão and Independência was instead used as a training ground.

Below is a seating plan of Atlético Mineiro's Estádio Independência: 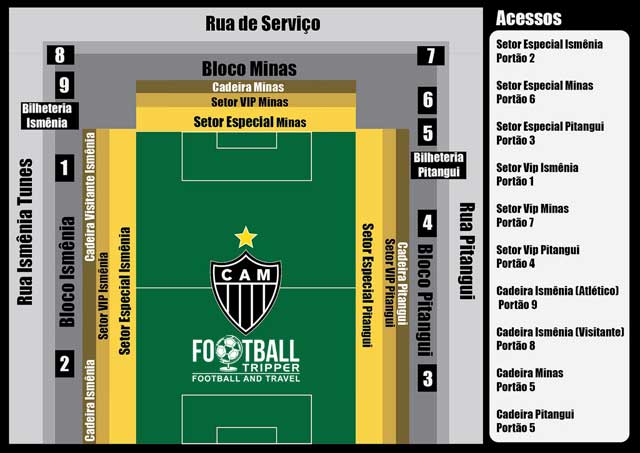