Estádio São Januário or Estádio Vasco da Gama as it is often referred to as is the largest privately owned football stadium in the state of Rio de Janeiro. Capable of seating 24,584 supporters, it is home to CR Vasco da Gama.

Estádio Vasco da Gama was inaugurated on April 27th 1927 with a match between the home side CR Vasco da Gama and Santos FC which was attended by Brazilian president Washington Luís. Primarily associated with football, the stadium has a separate political history of its own after being the location of many speeches by Getúlio Vargas who acted as Brazil’s dictator between 1930 and 1945.

Home to Vasco da Gama, it is the only football ground within Rio de Janeiro to be privately owned: Flamengo and Fluminense both play at The Maracanã which is owned by the state, and Botafogo play at Estadio Havelange which is owned by the city. With a capacity of 24,584 it is the smallest stadium of the city, and thus it was overlooked for the 2014 World Cup.

The stadium is often referred to by several names by supporters with Estádio São Januário – the name of the street the ground is located on being the most traditional. Estádio Vasco da Gama has risen in popularity in recent years as it refers not only to the team wider neighbourhood, but Estádio da Colina (Hill’s Stadium) due to its location next to the National Observatory of Brazil also a popular informal name.

Estádio Vasco da Gama is famous for being one of a handful of soccer stadiums in the world which contain the dug-outs and technical areas located behind one of the goals. Usually these are always located at one side of the pitch near the half-way line.

Upon opening, Estadio Vasco da Gama was the largest stadium in The New World until it was eclipsed in size by Montevideo’s Estadio Centenario in 1930, and the largest in Brazil until the construction of  Estádio do Pacaembu in 1940. The record attendance of 40,209 was set on 19th February 1978 in a match against Londrina Esporte Clube. 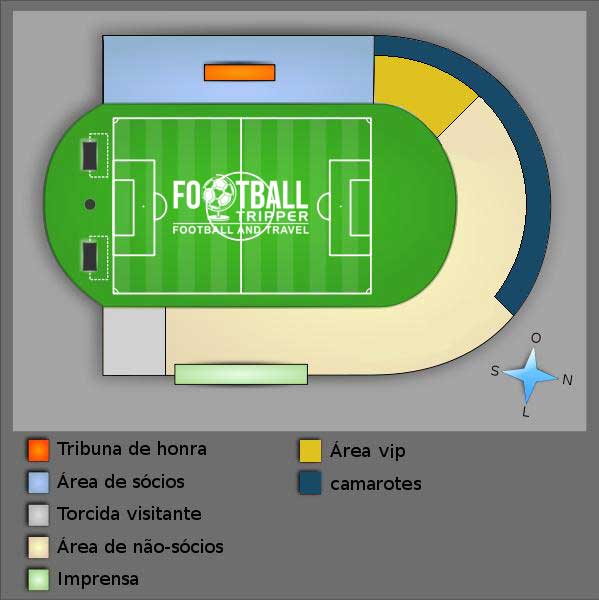 How to get to Estádio Vasco da Gama

Where is Estádio Vasco da Gama?

What is the capacity of Estádio Vasco da Gama?

As of 2023 Estádio Vasco da Gama has an official seating capacity of 24,584 for Football matches.

Covid Restrictions may be in place when you visit Estádio Vasco da Gama in 2023. Please visit the official website of Vasco da Gama for full information on changes due to the Coronavirus.