Estádio Major Antônio Couto Pereira, commonly shortened to just Couto Pereira is a 41,936 capacity football stadium located in the city of Curitiba, southern state of Paraná. Home to Série A side Coritiba Foot Ball Club, the stadium first opened in 1932 but was renovated once in 2005 and again in 2014.

Estádio Couto Pereira has been the home ground to Coritiba Foot Ball Club since the early 1930s and is named after the club’s former president Major Antônio Couto Pereira who helped to purchase the plot of land on which the stadium is built. Originally opened as Estadio Belfort Duarte after the Brazilian Defender as the local council could not agree a name, 45 years later it officially renamed in the President’s Honour.

The inaugural match was held on November 20th 1942 against residents Coritiba and America Football Club, with the home side christening their new ground with an enjoyable 4-2 victory. The stadium’s capacity peaked at around 70,000 during the 1980s when over 70,000 fans flocked to the stadium to see Pope John Paul II, although the highest attendance for a football match is slightly less.

On 15th May 1983, an estimated 65,943 spectators entered Estádio Couto Pereira to see Atlético-PR defeat the more fancied Flamengo side 2-0. During the late 1980s the stadium’s capacity was reduced in part due to the threat of crowd trouble but also due to modernisation plans which saw some basic seating converted to corporate matchday hospitality boxes.

The stadium was not used for the 2014 World Cup with the state of Paraná opting to put forward the more modern facilities Arena da Baixada as the region’s host venue. Constructed in 1999 and renovated a decade later, Baixada undoubtedly had the edge on Estádio Major Antônio Couto Pereira, although both capacities are pretty similar with there being a slight 5,000 or so difference.

Below is a seating plan of Coritiba's Estádio Major Antônio Couto Pereira: 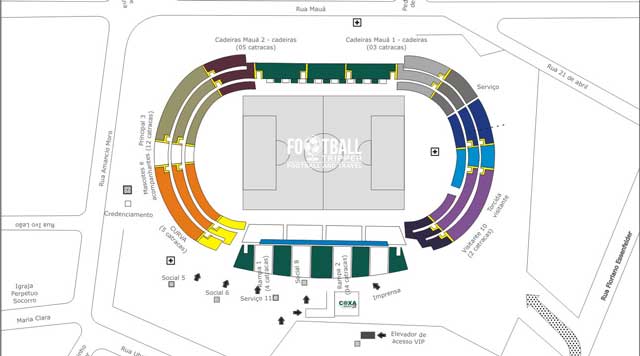