Sydney Football Stadium often abbreviated to SFS is a multi-purpose sports arena located in Moore Park, Sydney. Constructed in 1988 and known as the Allianz Arena for sponsorship reasons, the rectangular pitch is used most frequently for rugby league, rugby union and association football with Sydney F.C being the resident A-League Soccer team.

Sydney Football Stadium a.k.a the Allianz Stadium (not to be confused with Bayern Munich’s Allianz Arena) is a 1988 built rectangular stadium used to host a variety of sports including rugby league, rugby union and soccer matches. With a large 44,000 all-seated capacity the ground is often used for home matches of the Australian national team, The Socceroos.

Built on the site of the old Sydney Sports Ground at Moore Park, the stadium has proved popular with soccer fans after ditching the traditionally Australian oval shaped pitch which permitted more sports, but at a trade-off for the intimacy and atmosphere generated.

The record attendance was set back in October 1993 when Australia hosted a Diego Maradona captained Argentina in a 1994 World Cup Qualify match. The unexpected 1-1 for the home side helped increase the popularity of the sport in the country and helped light the touch paper for an improved domestic competition, ultimately resulting in the formation of the A-League in 2005.

While local side Sydney F.C haven’t been able to top the 43,967 attendance figures set by the qualification match, the 2009-2010 A-League championship has seen the interest in Soccer grow throughout Sydney, with the club even attracting legendary Juventus Striker Alessandro Del Piero for two seasons between 2012-1014.

In the future there are plans to create a “world-class sports facility” by redeveloping the area between Sydney Cricket Ground and the Allianz Stadium. The revamped public plaza will be fully roofed and complete with an LED façade which can change colours depending on who the home team is. Work was expected to take place in January 2014.

Below is a seating plan of Sydney FC's Allianz Stadium: 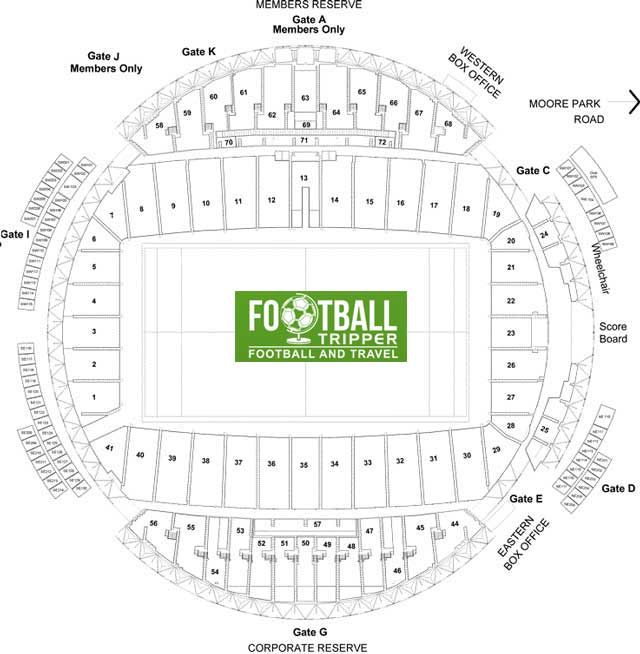 Away fans are usually housed within sections 1-3 behind the southernmost goal.

Needless to say the highest density of pubs are found within downtown Sydney, however on Oxford Street and Flinders Street which takes you to the ground there are a few decent bars such as The Local Taphouse, The Midnight Shift and The Porterhouse Irish Pub.

Within Moore Park itself there The Entertainment Quarter which has a decent mixture of places to eat, drink and shop. Located five minutes south of Allianz Stadium there are 15 bars and restaurants in total including the likes of the Bavarian Bier Café, PJ’s Irish Bar, Strike Bowling Bar and Gosh Coffee.

Inside the concourses of SFS itself cold-beer and  a variety of other drinks are of course on sale as well.

The restaurants within the Entertainment Quarter offer a diverse range of dining options ranging from the Golden Crown China Restaurant to Dolcetto Seafood Bar & Grill, and from Oporto Portuguese Chicken to Subway Sandwiches. Inside the ground the traditional stadium fare is on offer such as pies, hot-dogs and sausage rolls amongst other American influenced classics.

Merchandise of Sydney F.C is  either available to purchase from Allianz Stadium on matchdays or online 24/7 from the official online store which is operated by Playbill.

Tours specifically of the Allianz Arena aren’t available, however fans can see Sydney soccer stadium up close and personal as part of the Sydney Cricket Ground Tour Experience which covers the entire sporting complex.

Departing from the Venue Services Office, tours usually run once a day from 10.00 am Monday to Saturday for 90 minutes, and are not available on Sundays, bank holidays and match days.

For more information, and to book your tour you either can either phone the office on 1300 724 737 or visit this page.

How to buy Sydney FC Tickets

Tickets to see Sydney F.C play at Allianz Arena can often vary in price depending on levels of demand, and whereabouts you sit so don’t be surprised if the prices appear to fluctuate by a few dollars per fixture. The best place to compare them is on Ticketek who are the official ticket merchants of the club

Please note that the above ticket prices are illustrative for the 2015 season and do not include booking fee ($4.50) and payment processing fee for some credit cards.

How to get to Allianz Stadium

Where is Allianz Stadium?

Allianz Stadium is located within Moore Park which is the name of a wider sports complex located towards the south-east of Sydney city centre.

There are a small number of parking spaces available to the general public on matchdays within car parks EP2 and EP3, with additional spaces located within the Entertainment Quarter and the nearby Sydney Boys, and Sydney Girls High Schools. Parking costs $25.00 per car for car parks EP2 and 3.

Although there isn’t a train service directly to Moore Park, from Central Station one can get a variety of buses through a combined ticket known as “Moore Park Link”. This is particularly useful if you are travelling from outside of Sydney, with more information available from Transport NSW or by phoning 131 500.

The closest place to stay to Allianz Stadium is undoubtedly The Olympic Hotel on Moore Park Road followed by Captain Cook Hotel, The Cricketers Arms, and Manor House Boutique which are all on Flinders Street north-west of the ground. Within the city centre back towards Sydney Harbour there are of course more familiar chains such as the Radisson, Holiday Inn and Travelodge.

Who plays at Allianz Stadium?

What is the capacity of Allianz Stadium?

As of 2023 Allianz Stadium has an official seating capacity of 45,500 for Football matches.

When was Allianz Stadium opened?

Covid Restrictions may be in place when you visit Allianz Stadium in 2023. Please visit the official website of Sydney FC for full information on changes due to the Coronavirus.