The Docklands Stadium is a multi-purpose sports and entertainment Arena located within the historic maritime area of Melbourne in the state of Victoria. Constructed under the working name of Victoria Stadium, it is now known as The Etihad Stadium for sponsorship reasons.

The Docklands stadium was announced on the 31st October 1996 as a replacement for the antiquated headquarters of the Australian Football League (Aussie Rules) which were located at Waverley Park stadium. Completed in March 2000 over a construction period of 3 years at a cost of 460 million Aus dollars, the ground can be considered a multi-purpose venue due to the variety of events it hosts.

Home to no less than five AFL teams, the Docklands stadium has also been home to the A-League side Melbourne Victory since 2006 with initial scepticism about the public’s interest in the sport of soccer leading them to only use the stadium prior to this for important fixtures such as the grudge match against Sydney F.C.

With interest in Soccer slowly increasing in the club eventually moved away from the 18,000 capacity stadium in the 2006-2007 season and haven’t looked back with a record attendance of 39,730 and an impressive average of 27,000 fans per game – a figure which some believe would be reduced when the team play the small New Zealand based team.

Part of the ground’s popularity can be put down to the design of the stadium with planners envisioning a multi-purpose arena and thus configurable seating was installed. Traditionally some sports in Australia such as AFL and Cricket use oval shaped pitches but with moveable seating, a rectangular shaped pitched is achieved whilst still creating a decent spectacle and atmosphere.

The stadium has been known by several sponsorship names since opening including the Colonial Stadium, The Telstra Dome and more recently, the Etihad Stadium although this shouldn’t be confused with The City of Manchester Stadium.

Below is a seating plan of Melbourne Victory's Marvel Stadium: 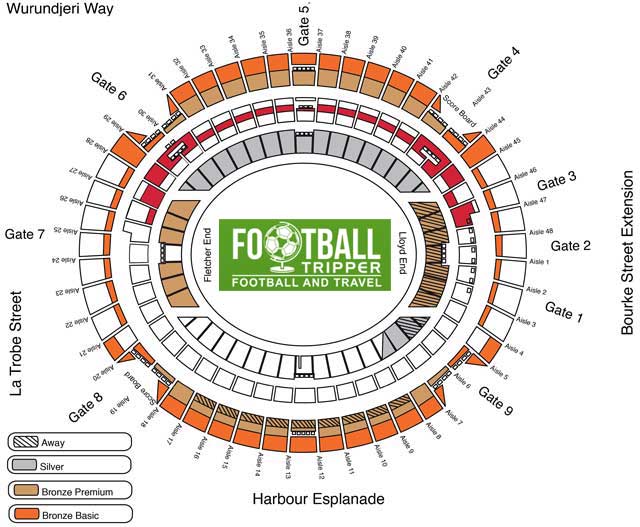 Located on a site overlooking Victoria Harbour, The Etihad stadium is spoiled for choice when it comes to choosing a scenic places to have a pint from. Most accessible from La Trobe Street are Woolshed Pub and Alumbra which are to centrally located within the bay.

To the north and south of the harbour there are bars, however they are adjoined to restaurants and may require patrons to get something to eat if they become particularly busy. Popular choices include Renzo’s Bar Cafe Italiano and Berth both the north, and Watermark Docklands to the south.

Open three hours prior to kick-off there are two supporters pub at the ground known as the Locker Room and EJ Whitten Bars, both of which are great places to soak up the matchday atmosphere and have a pint. For children under the age of 18 and for families there is the adjacent Locker Room Cafe. Make sure you get there early to grab ensure that you get a seat!

Inside the concourses of the stadium there are numerous bar outlets which sell a range of premium Australian Beers and other alcoholic beverages such as spirits and wine.

There are plenty of fast-food choices located in Melbourne city centre and the immediate vicinity of the Etihad which is great for the large number of fans who head to the ground on matchdays. Outside of Southern Cross Station on Spencer Street there is a Hungry Jack’s (Burger King) and Subway, and north-west within Harbour Town Shopping Centre there are a good number of restaurants including a Nandos.

From the kiosks inside the ground there is an abundance of food choices ranging from classics you’d expect from most stadiums (Pies, Hamburgers, chips) to the slightly more regional tastes (wedges and sweet chilli & sour cream, hot jam donuts, fish & chips).

There is even an Arena View Restaurant at The Etihad which overlooks the pitch if you want to sit down and eat before kick-off.

Melbourne Victory’s club shop usually opens for up to three hours before kick-off on matchdays, and unfortunately remains closed for all other days of the week. Thankfully you can purchase your Victory goods 24 hours a day, 7 days a week from the official online store.

Fans of both soccer and AFL can now see the Etihad Stadium in all its glory by undertaking a 60 minute “behind the scenes” tour which includes the players’ changing rooms, tunnel and much more restricted access areas.

Slight discounts are available for groups of more than 10, and tours can be booked by either phoning the Coordinator on (03) 8625 7277 or by sending an email to [email protected]

How to buy Melbourne Victory Tickets

Melbourne Victory play football matches at both the Etihad Stadium and AAMI Park, and thus prices can vary on a match by match basis. Below is a decent guide to matchday prices for the 2015 season but shouldn’t be taken as gospel whereas this page should.

This refers to seating located behind either goal-end.

This is the four blocks of seating either way of the half-way line.

Please note that the above ticket prices are illustrative for the 2015 season and don’t include booking fee ($4.50) and payment processing fee for some credit cards.

How to get to Marvel Stadium

Where is Marvel Stadium?

The Etihad Stadium is located within the Dockland’s Precinct which is a redeveloped area south-west of the central business district which overlooks Victoria Harbour, Melbourne. It’s just 10 minutes drive from the world-famous Melbourne Cricket Ground.

The official car park is open 24 hours a day, seven days a week and boasts just over 2,500 spaces across four floors. The multi-storey car-park costs $30.00 to use on matchdays whether you pay on the day or book in advance. To purchase a pass you can either phone the stadium on (03) 8625 7201 or send an email to [email protected]

The large Southern Cross Station is located adjacent to Etihad Stadium, and is directly accessible via the pedestrian footbridge on Bourke Street.

For complete timetables and to find out more information please visit the MetroTrains website.

Located less than 2km from the heart of Melbourne city centre there are hundreds of hotels available within a twenty minute walking distance including the likes of Hotel Ibis on Little Bourke Street, Travelodge Hotel Docklands, and DoubleTree by Hilton next to the Yarra River.

Who plays at Marvel Stadium?

What is the capacity of Marvel Stadium?

As of 2023 Marvel Stadium has an official seating capacity of 56,347 for Football matches.

When was Marvel Stadium opened?

What is the postcode for Marvel Stadium?

The postcode for Marvel Stadium is 3008.

Covid Restrictions may be in place when you visit Marvel Stadium in 2023. Please visit the official website of Melbourne Victory for full information on changes due to the Coronavirus.