Hindmarsh Stadium is a multi-purpose stadium located in the Australian city of Adelaide, and it is currently known as Coopers Stadium for sponsorship reasons, after Coopers Brewery purchased the naming rights. Adelaide United FC regularly fill the 17,000 capacity arena and there’s every chance of it being expanded in the future.

Coopers Stadium was built in 1960 on the site of West Torrens Football Club’s former ground the Hindmarsh Oval (1905 – 1921), a team which participates in the Australian rules Football. The Soccer Association of South Australia initially wanted to use a former brick pit known as Rowley Park as the location of the new football stadium but opted against this after learning of the difficulties of cultivating grass within the proposed site which is now a speedway track.

The stadium opened in 1960 with an initial capacity of 15,000 and the rectangular design with all-terrace spaces proved to be popular amongst fans of Adelaide FC. When Soccer was less popular in Australia in the 1970’s and 1980’s Hindmarsh regularly held matches of the National Team (The Socceroos) in addition to both Rugby Union and Rugby League Matches.

When Australia were awarded the right to host the 2000 Summer Olympic Games, the old wooden grandstand was replaced in 1996 with a new two tiered seating structure, as Hindmarsh stadium became one of the chosen venues to host football matches for the tournament. In addition to this, the pitch was extended by 10 metres in order to accommodate more sports, and new electronic equipment was installed such as floodlights and television display units.

With Football becoming more popular across the country post-millennium, matches of the Socceroos are generally held at either Brisbane’s 52,5000 Suncorp Stadium or Sydney’s 84,000 capacity ANZ Stadium. This means Hindmarsh is primarily used within the domestic A-League for games of Adelaide United FC.

Below is a seating plan of Adelaide United's Coopers Stadium: 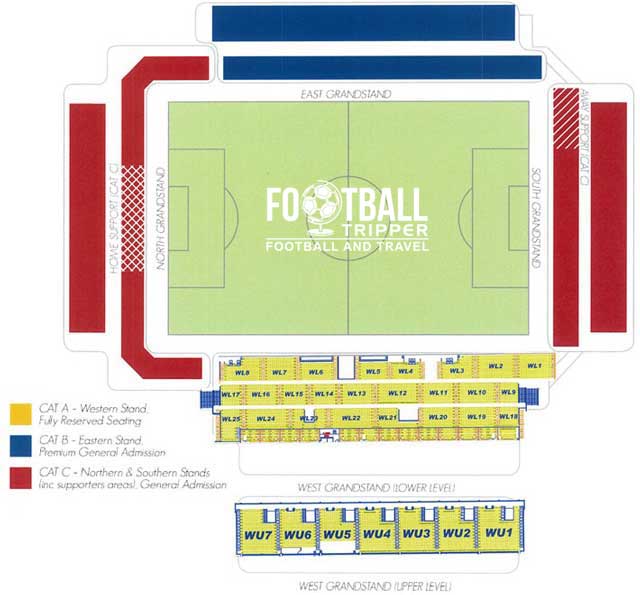 Away fans are usually housed behind the goal within the lower-tier of the south grandstand. All seating is reserved for the travelling supporters.

One of the most popular pubs on matchdays for supporters is the Joiners Arms which is on Manton Street, with The Ballroom Function Centre technically the closest. Two blocks way north-east of the ground there is Port Road which is full of bars and restaurants as is the centre of Adelaide.

Within the concourses of the ground there are the usual range of stadium classics on offer such as hot dogs, pies, pasties, pizza slices and sausage rolls amongst others.

Currently fans are only able to purchase Adelaide United Merchandise either on matchdays or 24 hours, seven days a week online via the official online store. For more information or to ask a specific question you could always send an email to [email protected]

Neither the ground operators or Adelaide United currently offer supporters the chance to undertake a tour of the facilities at Coopers Stadium. If this changes however we’ll be sure to update this section.

How to buy Adelaide United Tickets

Tickets to see Adelaide United play at Coopers Stadium can often vary in price depending on levels of demand, and whereabouts you sit so don’t be surprised if the prices appear to fluctuate by a few dollars per fixture. The best place to compare them is on Ticketek who are the official ticket merchants of the club

Please note that the above ticket prices are illustrative for the 2015 season and do not include booking fee ($4.50) and payment processing fee for some credit cards.

How to get to Coopers Stadium

Where is Coopers Stadium?

The official website recommends that you park at either the Adelaide Entertainment Centre which is 300m away from the stadium at a cost of $4 with 1,400 spaces available or at the Education Development Centre Car Park which is closer, more expensive at $10 and with less spaces (200).

The Bowden Train Station is approximately 500m away from Coopers Stadium, and it is the first station on the suburban railway lines which link Adelaide to Outer Harbor and Grange. It is a more suitable alternative to the tram if you are travelling from out of town.

Within the suburb of Hindmarsh there are three or so hotels located on Port Road including Hope Inn Hotel, The Land of Promise Hotel and Governor Hindmarsh Hotel. Back within the centre of Adelaide there are more mainstream choices such as a Hilton, Ibis and Comfort Hotels.

Who plays at Coopers Stadium?

What is the capacity of Coopers Stadium?

As of 2023 Coopers Stadium has an official seating capacity of 17,000 for Football matches.

When was Coopers Stadium opened?

What is the postcode for Coopers Stadium?

The postcode for Coopers Stadium is 5007.

Covid Restrictions may be in place when you visit Coopers Stadium in 2023. Please visit the official website of Adelaide United for full information on changes due to the Coronavirus.